v Faces in KS: Broc Ginavan - Sports in Kansas 
Warning: include(../includes/bodytag.php): failed to open stream: No such file or directory in /home/kansass/public_html/ks/news/index.php on line 36 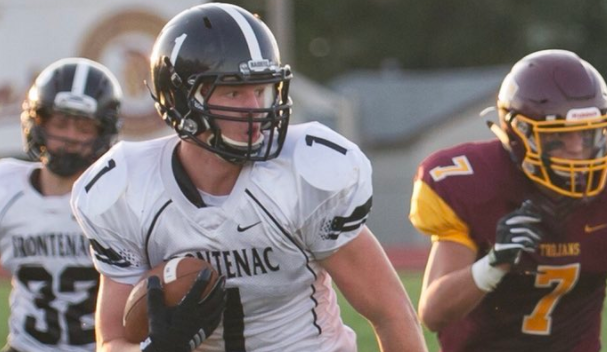 Over the last year and half, a player that we have been hyping quite a bit in the recruiting game because of his size and athleticsm is Frontenac senior athlete Broc Ginavan. Ginavan, a multiple-sport standout for the Raiders, stands 6-foot-4 and weighs between 220 to 230 pounds, depending on what season he is in. The hype proved to be worth it as Ginavan became the first Frontenac High School football player since 1966 to pick up an FBS Division I football scholarship offer while still in high school and not having to use the juco route as Wyoming offered the senior defensive end on Sunday after his official visit there this weekend.

"It felt like a dream come true to pick up the offer. Since, I was little, I always dreamed of getting a D1 offer." Ginavan said.

Being an athlete is something that is definitely in his blood. His dad, Steve, was a Top 11 all-state all-class football player for Emporia High School back in the mid 1980's and was on the same Top 11 all-state team as NFL Hall of Famer & Heisman trophy winner Barry Sanders who prepped at Wichita North. Steve went on to become an all-conference receiver at Pittsburg State in the late 1980s. Top 11 is pretty rare as Frontenac has had only one top 11 selection in school history, that being Watt in the fall of 1965 before signing with Mizzou in 1966 as a quarterback that winter. Frontenac coach Mark Smith, who was undefeated in high school as a player going 54-0 at Colgan with four titles under his dad Chuck Smith, was a two-time Top 11 selection as a junior and senior in high school (2002, 2003), before an All-American career as a quarterback at Pittsburg State.

Ginavan, who often gets double-teamed every outing, has been starting since his sophomore year on the defensive line for the Raiders. He has racked up 121 tackles, 23 tackles for loss, 12.5 sacks, three forced fumbles, 3 rumble recoveries, four batted passeas and a blocked field goal. As a reciever/tight end he has 38 catches for 606 yards with seven touchdowns. He was a first team All Non-Senior from Sports in Kansas last fall, a first team All-Area selection and a first team All-CNC defensive end in 2016.

He's not just a football player either in fact he may be more known for baseball. As a pitcher last spring, he was first team All-Area and first team All-CNC. He has a fast ball in the mid 80s and had a 6-1 record on the mound. In 37.1 innings of work last spring, he only allowed four runs, giving him a 0.75 ERA. Whatever sport he is in, he produces. He also averaged 7 points per game and 6 rebounds per game last year for the Raiders basketball team who made the 4A-II state tournament.

It's not all Givavan either for the Raiders success this season. Offensively the Raiders are led by senior running back Jake Wilbert and senior quarterback Peyton Brown. Defensive coordinator John Palumbo also has the Raiders playing great defense this time of the year, led by Ginavan on the defensive line along with senior two-way lineman Andrew Mays and Cal Strand. Mays is one of the toughest players in the league and brings that wrestling mentality every Friday night. Frontenac also has a weapon in the kicking game in Trey Harris. Harris is also a valuable lineman. Brothers Brendan & Jordan Ishimura have also had very solid years for the Raiders.

"The scout team has been key for us this season. They give us a great look every week in order for us to prepare. The bond I have created with all of my teammates this year is something I will never forget about football. Our defense has played extremely well over the last four games. If our defense continues to dominate we will have a shot to make a deeper run than last year." Ginavan said.

For right now all the focus is on the football season for Ginavan and getting the Raiders (7-3) deep in the 4A-II playoffs. That starts with a rematch with Holton for the third consecutive year, with FHS going to Holton on Friday for the second consecutive year. The Raiders have lost the last two meetings. Frontenac is in the round of eight quarterfinals for the fourth consecutive year under head coach Mark Smith. The last time the Raiders have advanced into the semifinals was 2000 in 3A when they beat Neodesha in the quarterfinals. That year the Raiders (11-2) went on to win the semifinal game over Rock Creek before taking second to Wichita Collegiate in the 3A state title game in Hays under then head coach Leon Miller. Frontenac is 0-8 in the quarterfinals since the 2001 football season but the Raiders are looking to change that Friday night at Holton.

We caught up with the standout multiple-sport athlete below in the latest edition of Faces in Kansas.

Special thanks to Labette Bank of Frontenac for presenting this feature. Labette Bank is a proud supporter of Southeast Kansas athletics. Be sure to nominate the Labette Bank Athlete of the Month w/ Sports in Kansas by emailing Chet Kuplen at: sportsinkansas@gmail.com

I started playing in the 4th grade, and loved it ever since.

My goal is to receive an All-State honor, as well as to make it to the state championship game.

How did it feel to pick up the first FBS offers as a high school kid at Frontenac in a long time?

It felt like a dream come true! Since I was little, I always dreamed of getting a D1 offer.

Your dad (Steve Ginavan, Emporia HS) was a Top 11 player in all classes the same year as Barry Sanders, how cool is that?

It’s unreal that my dad played with one of the best running backs of all time. He told me that during the Shrine Bowl game, Barry had a run to the outside and my dad tried to catch him but couldn’t because Barry was like a cheetah.

Do you guys have a shot to make a deeper run this year?

Our defense has been extremely good these past 4 games. If our defense continues to dominate we will make a deeper run than last year.

I’m very competitive, and I want to win.

We are a Run N’ Gun offense, with multiple formations.

We are like the Showtime Lakers, every game we play we want to put on a show.

The key players on our team are the scout team players. They give us a great look every week, in order for us to prepare.

The bond you create with your brothers is something you will never forget.

You’re also a standout baseball player, describe yourself as a player/pitcher?

I feel like I’m in control of the game every time I pitch.

What’s it like to play for Coach Smith, Coach Vars and Coach Sullivan?

They are all outstanding coaches, if you asked them to do anything for you, they will do it. I love playing for them.

Everyone showed up to lift 4 days a week throughout the whole summer to become stronger and to improve our chemistry with each other.

Outside of Wyoming in football are you seeing any interest in football or baseball anywhere else?

No not at the moment, but I hope to receive some more interest in the near future.

Hanging with my friends in the basement of 503.

Hopefully playing a sport that I love to play and with a beautiful red headed family.

I don’t have just one role model I have two. And those two people are my mom and my dad. The way they treat other people strives me to be the best person I can be.

Gusanos Pizza. They have the best cheese pizza in the world.

I collect change, even if I find a penny I collect it. I have a bucket full of change in my room and thinking about going shopping one day to see what I can buy.