v Faces in KS: Cade Miller - Sports in Kansas 
Warning: include(../includes/bodytag.php): failed to open stream: No such file or directory in /home/kansass/public_html/ks/news/index.php on line 36

Cade Miller of West Elk is one of the top 8M-I football players in KS. (Photo: Megan Haag) 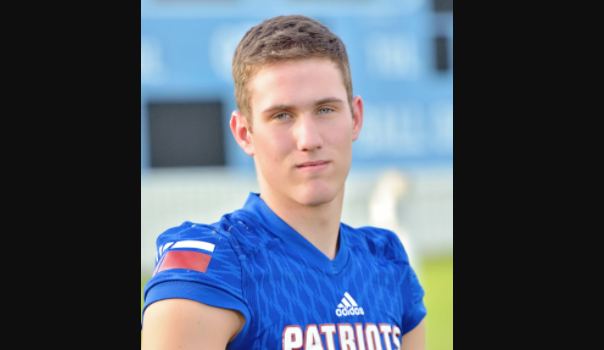 When you hear Howard, Kansas or West Elk High School you instantly think of what? Well we think of Wisconsin Badger redshirt-freshman defensive end Isaiahh Loudermilk, a 6-foot-7, 306-pounder, who we covered on this same feature two years ago. And you should think of that, because what are the chances a kid from a tiny town in Kansas gets to sign let alone play in the Big 10. But its not only Loudermilk that we are here to talk about and it's not only him that can play high school football in the town of over 600. In fact, West Elk is proving to be one of the best 8-man teams in Kansas this season.

When it comes to passing the eye test for size in football, West Elk senior Cade Miller isn't going to do that. He isn't  or wont be heavily recruited like Loudermilk or for that matter a college prospect on most recruiters radar. However, he's not expected to be. It doesn't mean that he cant, just speaking the truth of what is currently going on. But if you come watch him play 8-man football on Friday nights, he's one of the best the state has to offer in the high school ranks of 8M-I. He's a very good high school football player and that's what we are here to talk about.

The senior quarterback, who is 5-foot-8 and 162-pounds, seems like he has been playing for the Patriots forever. Miller has rushed for 4,024 yards in his four year career with 86 touchdowns on the ground. He has also thrown for 2,377 with 43 touchdowns through the air.  As a senior he has 1,202 rushing yards with 24 scores and has thrown for 977 more with 17 scores. He has had at least 1,100 yards rushing in each of the last three seasons for West Elk. He also added over 300 yards recieving as a freshman in 2014. He has acumulated 8,101 yards his career when you add up passing yards, rushing yards, recieving yards, return yardage and interception yardage with 140 total touchdowns. It almost sounds made up, but it's not.

He's not just an offensive player either, he is one of the best defensive backs in 8-man football. He has tallied 21 interceptions over his career, including five this season. He also has two fumble recoveries this year. For his career he has registered 264 tackles. Miller is also a standout on the basketball court averaging over 15 points per game last year and 10 points per game as a sophomore. In baseball, Miller hit .427 in 20 games last spring. Miller is also an outstanding student as he carries a perfect 4.0 GPA in the classroom.

It's not all Miller though with the success of the undefeated Patriots this season. William Silvey has rushed for 800 yards this season with 13 scores. He also has 392 yards recieving and five scores. William Hurt is second on the team in recieving yardage with 249 and six scores. Hurt also leads the defense with 93 stops. Sophomore Nic Moreno is third on the team behind Hurt and Miller with 70 tackles, while senior Josh Johnson is fourth with 62 stops.

The Patriots (10-0), led by head coach Chris Haag, will be back in action this week as they host the undefeated Burlingame Bearcats (10-0). The winner will get St. Paul or Osborne in the 8M-I semifinal next week. West Elk is in the round of eight for the third consecutive season, which is also the third appearance in this round in school history. The Patriots have never advanced out of the round of eight, something they are hoping to do this week. We caught up with the oustanding senior play maker below in the latest edition of Faces in KS.

I originally started playing in the front yard with my brother and neighbors and then in fourth grade I played for our school recreational team.

What is it like to play at West Elk?

It is a great experience because the community is so involved with how the team is doing and the coaches always push us to be our best.

How has the season went so far and the playoffs?

Our team has had an excellent season so far as we are undefeated and we look to continue this success into the playoffs.

Do you guys have a shot to make a deeper run this year?

Yes, we have a great group of guys who have worked hard all season and expect to take in to the next level in the games remaining.

I have worked hard over the years and have been blessed with an athletic ability to allow me to both pass and run the ball.

Our offense adapts to the defense that is shown and the scenario of the game. We will throw in different sets to keep the defense off balance.

No matter what game people choose to come to, they will see physical football on each and every play and guys that fight for each other on the field.

Everyone is a key player on this football team. No one guy is more important than the other, if one guy doesn’t do his job then it can become a struggle.

The best thing about football is seeing the whole community sitting in the stands and cheering for you the whole night. Also, playing with your best friends because nothing is more fun than going to battle with them.

Coach Haag is a guy that is all football. He will do everything in his power to help us win a football game. The coaching staff works well together to get us ready week in and week out.

This off-season we put in a new weight and conditioning program to focus not just on becoming stronger but also to work on our speed and agility.

What was it like to play with Isaiahh Loudermilk and how awesome is that to see an 8-man kid play a lot for Wisconsin almost immediately?

Isaiahh was one of the neighbors that I played football in the front yard with. We called ourselves the “hill fam” and would have daily games depending on the sports season. It is awesome to see him getting so much playing time. He proves to people that 8-man football has talent. Being able to go watch him in these big time stadiums is a great experience.

Along with football, I play basketball and baseball.

I like to hunt and fish. I also enjoy hanging out with friends.

I see myself getting a degree in college and an advanced degree to further my career in the medical field.

My favorite subject in school is science. I am a 4.0 student where grades come before sports.

My role model is my older brother because he pushes me to be better than he was. He is very humble and I try to reflect off of him.

Sweet and Spicy would be the best place to eat because they have the friendliest staff around and while you are waiting on your food you can play pool or air hockey with your buddies.