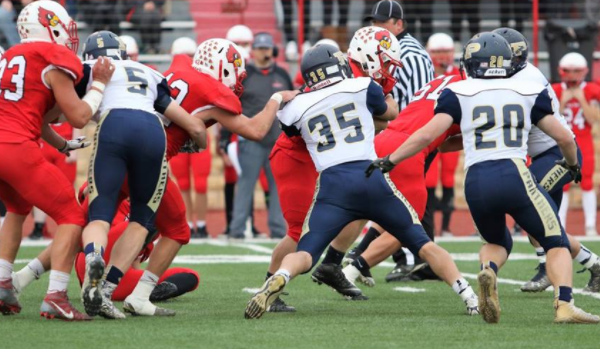 The Nex-Tech Wireless Western Kansas Athlete of the Month from Sports in Kansas for their play over the month of October is Phillipsburg senior linebacker, John Gower.

Gower, who has already earned all-state honors the last two seasons and looking to make a third, is having a huge year on the defense of the 3A #1 ranked Panthers. In the first nine games of the regular season he racked up a team leading 86 tackles, seven tackles for loss with a team-leading five interceptions. The senior is a ball-hawk that watches more film than anyone, as described by his coach J.B. Covington to us earlier this year, and it shows because he is in on nearly every play. He also serves as a blocking fullback that has had over 500 yards rushing and seven touchdowns during the regular season for Phillipsburg in limited time due to blowouts for the 11-0 Panthers.

Phillipsburg gets Hesston (8-3) this week in the 3A sectionals, a team they lost to a season ago. Hesston knocked off previously undefeated Conway Springs in the regional playoffs last Saturday on a last second 27-yard field goal to win 45-42. Phillipsburg won the 2-1A state title in 2-1A with Gower as one of the top playmakers defensively. The offense is led by senior Kirk Coomes who had nearly 1,000 yards rushing during the regular season and junior Treylan Gross who had nearly 800 yards rushing.