Wyatt Seidl of McPherson is one of the top defensive lineman in KS. (photo: Lori Vangoethem) 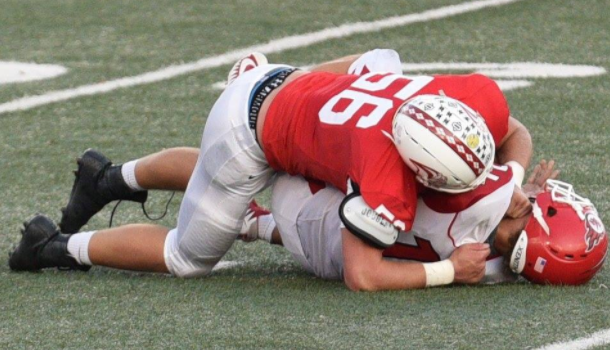 McPherson is coming off a 15-14 overtime victory over Buhler in regional play in which the Bullpups elected to go for two and not kick the extra point to take it into double OT after trailing 14-13 before the try. Kyler Kinnamon lined up in a wildcat formation and gave it to Gabe Hoover on an apparent reverse although Hoover would pass it to a wide open Kyler Hoppes in the endzone. Hoppes is the McPherson quarterback.

McPherson (9-1) will be back in action this week in which they will face the Maize South Mavericks (9-1). Maize South is the only team to beat McPherson this year, earlier in the season by the score of 9-0. The winner of McPherson vs. Maize South will get the winner of Andale or Mulvane in the 4A-I sub-state championship.

Nex-Tech Wireless would like to congratulate Wyatt Seidl and the McPherson Bullpups on their big-time performances this season.