v Labette County looking for first playoff win since 2000 - Sports in Kansas 
Warning: include(../includes/bodytag.php): failed to open stream: No such file or directory in /home/kansass/public_html/ks/news/index.php on line 36 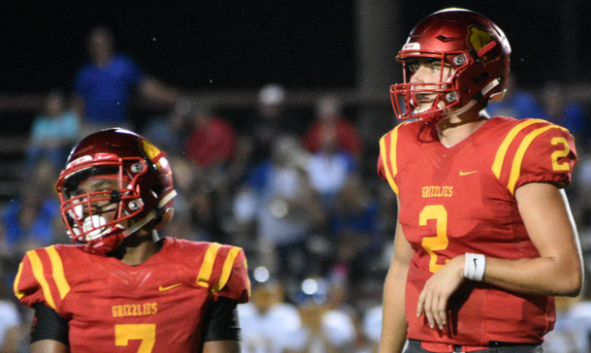 Labette County football has had some success over the years, it just hasn’t been in making the state playoffs or winning when they do get in them. Sean Price entered Labette County looking to change that as the head coach in the fall of 2015 in his first year going 3-6. Last year the Grizzlies took another step as they went 5-5, making the playoffs for the first time since 2009. This season LCHS has went 8-1, won the SEK League with an undefeated league mark, won the district, and are looking for their first playoff win in 17 years this Friday when they host Paola.

“We’ve had a good year. We have been consistent all year defensively and offensively. Kids were excited when we made the playoffs last year. Last year it was unfamiliar territory for us, so we had to put our kids in pressure situations all summer, so they would be ready this year. We had a great summer and had high expectations coming into this year. Our slogan this summer was to be comfortable being uncomfortable. It’s pretty darn exciting about what’s happening here, and we are all excited about it.” Price said.

Labette, who was known for its offense last season, is being known for it’s defense this year as well. Outside of the only loss (39-0) to 4A-I #2 Andale, the Grizzly defense, led by defensive coordinator Travis Burk, has only allowed 38 points in their eight wins this season. They limited the Fort Scott Tigers to just seven points in the 34-7 win back in week four, marking the second year in a row they have beat FSHS. The defense is led by senior linebacker Rogan Bruce who has 125 tackles and ranks among the leaders in Kansas. Quiency Jones also has 82 stops for LCHS, while Caleb Haggard has 67. Haggard also leads the squad with 10 sacks on the year. Keshaun Anderson patrols the secondary as he has a team leading four interceptions.

“I would take a solid defense any day over a solid offense. They have been very consistent, and you can tell that from the scores. Coach Burk has done an outstanding job with them.” Price said.

The offense is also clicking all season long. Easton Dean, a 6-foot-7 junior, in his first year playing quarterback as a starter, has played like one of the better quarterbacks in 4A-I this season as he has passed for 1,671 yards with 21 touchdowns to just three interceptions. He has also rushed for 440 yards with eight more scores. T.J. Mayhue leads the rushing attack with 900 yards and 18 scores on the ground. Tanner Russell leads the receiving corps with 524 yards and four scores. Kale Irwin also has 413 yards and six scores as a receiver, while Owyn Back has 330 yards with five scores. Josiah Rexwinkle also has over 200 yards and three touchdowns. Dean is a game-time decision this week as he broke his hand, a boxers-fracture, last week against Coffeyville. However, he has been throwing the football this week and is still a weapon with his legs. Austin Jones is also a capable back-up and helped the Grizzlies to the win in the second half last week, 34-8, after being tied 8-8 at the half against Coffeyville.

Price also credits a lot of the success of the program not only to the off-season program in the summer of the kids buying in, but to the two-platooning system they implemented last year. It allows more kids reps and gets more kids on the field, which is a process at first, but once implemented can reap benefits.

“It’s huge for our program and has meant everything in getting these kids ready to where they are at now. We see it really paying off in the second and third quarter as the kids are staying fresh with only playing one way. The kids are also only practicing one way. We’ve had a lot of injuries, but our kids are getting so many reps in practice and games, it hasn’t hurt us as much as you would think. Practice has been huge for our program; our younger kids don’t sit around and watch the first team at practice they are all getting reps.” Price said.

The Grizzlies get Paola at home this week. Paola is a 7-2 squad out of the Frontier League and took district runner-up in a district that also featured district champion Fort Scott, Louisburg and Ottawa. Their only district loss came to the Fort Scott Tigers in week eight, 27-26. Paola is a consistent playoff team, making the state playoffs for their 23rd time this season, while LCHS has made it 13 times in school history. Labette County is just 2-12 all-time in the Kansas playoffs with the last win coming in 2000 when they beat Chanute, 34-28, in the 4A first round, before falling 30-0 to eventual 4A state champion Fort Scott in the quarterfinals. The only other win prior to that came in 1993 when LCHS beat Parsons, 20-6, before losing 22-0 to Paola in the 4A quarterfinal. That was also back in the day when only one team made it out of districts unlike the current format since 2002 where two teams have made it every year.

Labette Bank would like to congratulate the Grizzlies on their 2017 SEK undefeated league championship and wish them best of luck in the 2017 4A-I playoffs. Labette Bank is a proud supporter of high school sports in the state of Kansas with Sports in Kansas.

Special thanks to Sean Frye, Sports Editor at the Parsons Sun, for providing the photo of Dean and Mayhue