v Faces in KS: Lane Whisennand - Sports in Kansas 
Warning: include(../includes/bodytag.php): failed to open stream: No such file or directory in /home/kansass/public_html/ks/news/index.php on line 36

Lane Whisennand has over 2,600 yards of offense for Elkhart in 2017. (submitted photo) 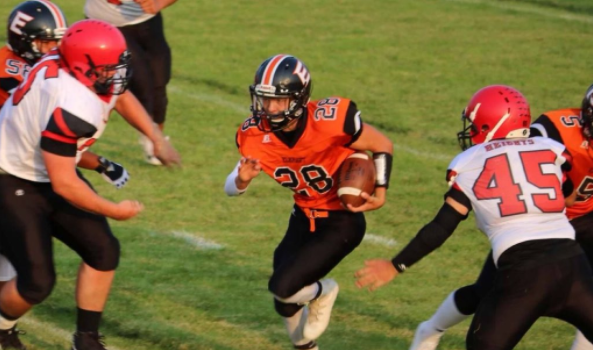 Elkhart, Kansas, population of around 2,000 people, is located in the very southwest part of the state. You’re actually closer to Oklahoma, Colorado, Texas and New Mexico than you are to the majority of the Kansas towns that you’ve probably heard of. In fact, the Wildcats played an opponent from New Mexico this season in football during the regular season at home, but last season traveled to Clayton, New Mexico. They've also played opponents from the state of Oklahoma as they are located right on the line. Elkhart is the home of the Wildcats and this year they feature one of the top playmakers in 2-1A in junior Lane Whisennand.

Coming into the 2017 season, the biggest question mark for Elkhart is who would replace three-year starting quarterback Tyler Skelnar, who passed for nearly 1,400 yards last season with 25 total touchdowns. Well it looks like Elkhart has that figured out in Whisennand, who was a receiver and defensive back for the Wildcats last season.

The 5-foot-10, 150-pounder, is never the biggest buy on the field, but he’s among the top small school performers in the state this season. Whisennand is a speedster that has been clocked in the 4.55-4.60 range in the 40-yard dash. He has had a breakout year at the quarterback position in which he has passed for 905 yards with 10 touchdowns, while rushing for 1,762 yards with 26 more scores over the first nine games. His 1,762 rushing yards at the quarterback position this season are the most in Kansas for a quarterback in any classification. He also averages 9.9 yards per carry.  Whisennand didn’t see the ball a lot on offense last year, just six receptions for 94 yards and three carries rushing for 19 yards, so his success this year has been eye opening.

Whisennand also gets it done defensively for the Wildcats as he has tallied 38 stops, three fumble recoveries and two interceptions (1 TD) from his cornerback position. Last season he had 34 tackles and three interceptions as a sophomore. Although it hasn’t been needed often, he has also served as the punter this season for Elkhart. There’s not much the junior can’t do. He's also a bull rider when he isn't playing a high school sport for the school. Makes sense on why Whisennand is such a tough competitor.

Joshua Salazar has also stepped up big this season with 659 yards rushing and eight scores. Javier Gomez is the leader in receiving yardage with 388 yards and four scores. Salazar also leads the Elkhart defense with 79 tackles this season.

Elkhart went 6-4 last season losing in the first round of the playoffs to Plainville. Elkhart has just three playoff wins as a school, two of those coming in 1993 when they made the 3A semifinals and another coming in 2009 in 2-1A. They are looking for their first playoff victory in eight years on Friday. This season, led by second year head coach Chris Hattabagh, the Wildcats are off to a 7-2 start and just captured their district title last week. The Wildcats only losses have come to two 3A playoff qualifiers in Lakin and Cimarron. Elkhart will be back in action this week as they take on La Crosse in a rematch in the first round of the 2-1A playoffs at home. Elkhart defeated La Crosse 30-20 back in week one of the season.

We caught up with the oustanding junior playmaker below in the latest edition of Faces in Kansas.

This feature is presented by Dairy Kreem of Elkhart, a proud supporter of Wildcat Athletics.

To make it past the first round of playoffs

Yes, I think we do

We play hard and are sure to shock some people

The offensive line and our JV scout team

Our season so far has been off to a positive start, a lot of people had their doubts about us but I think we proved them wrong

I would love to continue playing football at the next level

Yes, I also play basketball, baseball, and on my free time I Bullride

Graduated from college and starting my family

Strength and Conditioning, I am an  A/B+ honor roll student

My dad and Grandpa

My favorites are Dairy Kreem, Big C’s and Wildcat Cafe

I usually keep to myself