v Faces in KS: Connor Jeffers - Sports in Kansas 
Warning: include(../includes/bodytag.php): failed to open stream: No such file or directory in /home/kansass/public_html/ks/news/index.php on line 36

Connor Jeffers is having a huge year in 4A-II for Burlington. (Photo: Paige Sloyer, BHS Yearbook) 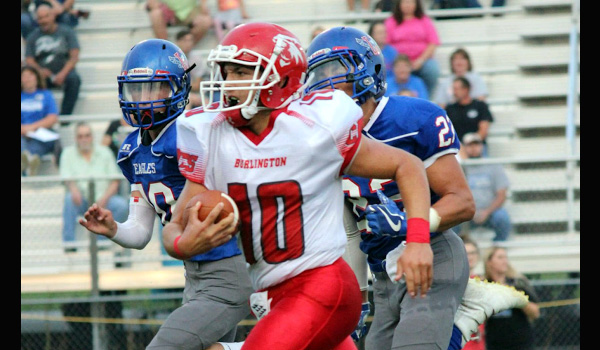 Connor Jeffers of Burlington High School is a baseball player first. He has committed to one of the best junior college baseball programs in the country in Neosho County after hitting over .400 as a junior last spring. But right now that's not on his mind, it's his time to shine on the football field as he has been one of the breakout players in 4A-II this season.

Jeffers, a 5-foot-10, 175-pound, quarterback and linebacker, has been doing a little bit of everything for the Burlington Wildcats in 2017. Jeffers is the leader of the single-wing offense this season as he has picked up 1,527 yards rushing with 23 touchdowns over the first eight weeks. Jeffers rushing total is second among all of 4A-II this season and first among quarterbacks. He is also second among all quarterbacks in the state in any class in rushing yardage. The Wildcats dont throw a lot but Jeffers has also thrown for 549 yards with six scores through the air.

Jeffers credits his offensive line play for the success of him as an offensive player this year.

"Our line is a very crucial part of our team, we have come so far in our many years of football. Many of them have played together since we were little. A big help was when Tate Petrie, Coach Petrie's son, came to town. He was able to help us learn and understand the offense. We average around 250-pounds on our line." Jeffers said.

The line helped pave the way for Jeffers biggest game of the year last Friday in the 44-28 win over Girard to clinch the district championship. He had 362 yards rushing with four touchdowns in the game. He averaged 15.1 yards per carry in the contest.

Jeffers isn't just a offensive player either. He has racked up 73 tackles from his linebacker spot this season with 7.5 tackles for loss. He is a ball-hawk that also causes fumbles with seven forced fumbles in 2017. He also has five fumble recoveries this year.

It's not just Jeffers with success either as Burlington, led by head coach John Petrie, could be a breakout team to watch this year in the 4A-II playoffs as they sit at 5-3 as they enter week nine against Anderson County. The three losses can be viewed as a bit deceiving on their record. The three losses are by a combined 19 points, while all of their wins have been by 14 or more points. Burlington is also in the playoffs for the first time since 2014 and first time as a district champion since 2010, when they won a 3A district. The Wildcats are just 6-13 all-time in the Kansas playoffs.

"We have had our ups and downs, but we have learned a lot about who we are. We learned how much turning the ball over and being disciplined means to the game. Without turnovers we could very easily be undefeated. Districts have gone great so far, we are 2-0 while clinching the district championship. It was our first district championship in a long time." Jeffers said.

Burlington will travel to Garnett this week to face Anderson County before the 4A-II playoffs starting on November 3rd. With the district championship it will give the Wildcats a home game. We caught up with the senior multiple-sport athlete below in the latest edition of Faces in Kansas.

My first memories of football are getting to watch my older brother play in youth football.

I have had three major goals this year: First a home play-off game for the school, which we had not accomplished in eight seasons, Second a league title, and lastly a personal goal was 250 all-purpose yards a game.

We have as good of shot as anyone else. We often get over looked because of our record, but we have a great line up front with a good balance of depth in the back field. We have a great running game with the ability to pass when needed.

Describe your position in the single-wing?

In our offense the quarterback is the running back; a lot of times it’s a direct snap I just get and go. Through HS I have primarily played quarterback, and that was always a goal for me growing up. My dad was a quarterback here at Burlington and I always wanted to follow in his footsteps.

I have the yards that I do because of the line up front, they always create amazing holes that you could drive a truck through. I do consider myself a very versatile runner. I create separation with my speed but am also very physical. I can create yards with my physicality; a lot of which comes from the heart I put into the game.

How has district play been so far?

Districts have gone great so far, we are 2-0 while clinching district champs. It was our first district championship in a long time. Also I had my record game on the ground against Girard. 362 on the ground with 4 touchdowns; it seemed like I was able to just break big play after big play. Majority of that credit goes out to the rest of my team who are always looking to make a key block.

Other big playmakers on our team other than the line has to be Garrison Fiedler, Tucker Whitworth, Jacob Jasper and Cael Johnson. Garrison is a 6’5 200 pound senior who is a force as an outside backer and my favorite Target on the offensive side of the ball. Tucker Whitworth is a 5’10 150 pound senior who leads our team in tackles, who always makes the key block on offense. Jacob Jasper is a scrappy outside linebacker that isn’t afraid to get down in the trenches when we need him to. Cael Johnson is our second leading rusher and is always a threat to break one lose.

Your line play has been pretty good this year talk about that?

Our line is a very crucial part of our team, we have come so far in our many years of football. We average around 250 pounds on are line, while having good feet. Many of them have played together since we were little but a big help was when Tate Petrie, Coach Petrie’s son came to town. He was able to help us learn and understand the offense.

The single wing is an offense that tries to outnumber you at the point of attack and force you to try to adjust to it. When people start to bite on the run we beat you over the top with our passing game.

You need to come watch us because we play every snap like it is our last. We know that our time is very short and we play every down for each other. The game of football is a team sport, and the Burlington Wildcats play as a family.

Burlington stadium is unique and very cool to look at, talk about what it’s like to play there? Kind of looks like an old castle and very noticable as you drive-by?

I love the feeling under the lights, with the city watching, and the ball in my hands. One of the greatest feelings in the world. It has brought me closer to my team and has given me memories that I will never be forgotten.

He is like a second dad, like I said earlier we become a family during the season and coach adopts the role of dad. He does a great job and sometimes he doesn’t get the credit he often deserves.

We have had our ups and downs, but we have learned a lot about who we are. We learned how much turning the ball over and being discipline means to the game. Without turnovers we could very easily be undefeated.

It will take great line play and tough defense stops. We can score the ball with anyone and we are becoming a much better defensive team as the season progresses.

We are constantly in the weight room and playing other sports to stay in shape. We run plays when we can and have attended a couple 7 on 7 football camps.

I committed to play baseball at Neosho County College in Chanute, Kansas. Though I love the sport of football and I have given my heart and soul to the game, at this time I have not received any offers for the next level.

I love to be in the outdoors with my family and friends. I am an avid outdoorsman: whither that is hunting deer and ducks or fishing; to me there isn’t much better.

I would love to make it to the big league in either football or baseball, but more than likely I will have a degree in Veterinarian Science. I plan to stay within the four surrounding states and own my own practice.

I love American History, I like to learn about how and what it took for our country to get to where it is today. I have earned the right to be in National Honor Society and am consistently on the High Honor Roll.

My role model has to be my brother. He is the hardest worker I know. At 5’7 he was never afraid of anyone playing football, weather you were 6’6 or 5’6 he was willing to run right over the top of you if you were in his way. He showed me that if you were willing to out work and out want someone; there is no reason why you can’t beat them.

The best place to eat in town has to be the Wes Byfield household. When grandpa is cooking, he always lets me know so I make sure to get some of it, but the best place to eat out and about is La Hacienda. There is nothing like a good ole Joel Burrito.

I love to spend time with the kids in my community; especially when they want to learn about the sports I love to play. There has been a lot of people that have helped me get to where I am and I take pride in passing those skills on to our future wildcats.