v Faces in KS: Peyton Kuhns - Sports in Kansas 
Warning: include(../includes/bodytag.php): failed to open stream: No such file or directory in /home/kansass/public_html/ks/news/index.php on line 36

Peyton Kuhns and Nickerson are looking to make a run. (Travis Morisee - The Hutchinson News) 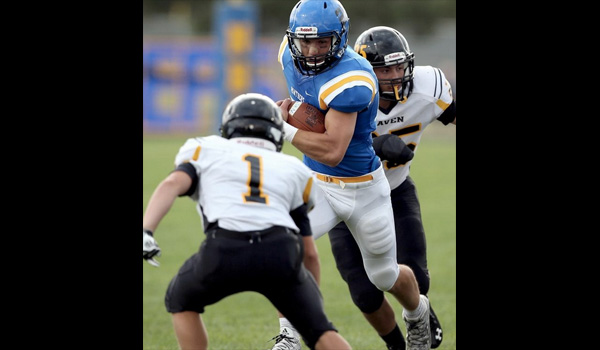 When we start to look at the top 4A-II football players in the state of Kansas one that comes up is Nickerson senior back Peyton Kuhns.

The 6-foot-1, 195-pound, senior, has been getting it done on the ground for the Panthers since his sophomore year. Kuhns has 1,058 yards this year on 146 rushes with 18 touchdowns for an average of 7.3 yards per carry in the flex-bone offense of head coach Mike Vernon. As a junior last fall, he had 1,256 yards with 14 touchdowns. In seven games as a sophomore he had 923 yards with eight touchdowns. Kuhns has an impressive 3,237 yards rushing in his career.

Kuhns is running back with a combination of athleticism and power. Kuhns has a 36-inch vertical and bench presses 300 pounds. He has decent speed but he is a hard-nosed runner that likes contact.

“I can be shifty when needed but I am a hard-nosed runner who likes to hit head on. I am going to work as hard as I can to get yards when the team needs it.” Kuhns said.

Not only is Kuhns seeing success, his team is also a contender to watch for in 4A-II this season. Nickerson has a heavy rushing attack and has only thrown for 211 yards the entire season. However, the team has ran the ball for an average of 252.9 yards per game in 2017. They also hail from the running back league of Kansas which features six backs from six different schools averaging at least 100 yards rushing per contest in the Central Kansas League. Nickerson ranks second overall in the league in rushing yards, trailing only the defending 4A-II state champion Pratt Greenbacks (7-0). Kuhns only ranks second in the league in rushing behind all-state all-class running back Travis Theis of Pratt. By the looks of it there could be three-to-four all-state caliber running backs, if not more, in the CKL in 2017. Kuhns also ranks fourth in all of 4A-II in rushing yardage after seven weeks.

Nickerson seems to be that dark-horse team of 4A-II football this season. They are off to a 5-2 start this year with their only losses coming to defending 4A-II champ Pratt (28-14) and 3A Hoisington (32-14). They have picked up key victories this year over some pretty good 3A teams in Hesston (47-21) and Larned (27-7). The CKL league is a league that prepares you for the post-season. Last year Hesston also took 3A runner-up in addition to Pratt’s title run in 4A-II.

“We play in a tough league and are continually challenged. Every week is tough, but we wouldn’t want it any other way.” Kuhns said.

“Coach Vernon has built this program up and I am honored to be a part of it. The atmosphere immediately changed when he came in here at the beginning of my sophomore year.” Kuhns said.

Nickerson will be back in action this week in week eight of the season as they have a key district match-up with Wichita Collegiate (4-3). Collegiate record can also be a bit deceiving as they play a quality schedule against bigger schools. Both teams are 1-0 in district play as Nickerson knocked off Wichita Trinity (70-35) and Collegiate beat Clearwater (40-20). Likely the winner of this week’s match-up could become the district champion. Nickerson, a school with just two all-time playoff wins, is looking to turn the corner this season after back-to-back playoff appearances with losses over the last two seasons. Nickerson hasn’t won a playoff football game since 2006, when they beat Smoky Valley 14-13 in the 4A first round. The only other playoff win in school history, also 4A first round against Smoky Valley (13-8), came in 2001. Kuhns and company are looking to change that this season.

We caught up with the outstanding senior back below in the latest Q&A edition of Faces in Kansas.

I started playing in 5th grade because my friends were into it. I actually stopped playing after one year, but all of my family said I was athletic and I should give it a shot again. As usual, they were right! It wasn’t until 7th grade when I really started to love it.

In the long run our goal is winning a state championship.  Day by day we're just trying to get a little better and fix another mistake.

Whatever my team needs me to do, I’ll do it. If it's 4th and 1 and I'm expecting the ball, I'll stop at nothing to get that yard.

I think so, but that’s because I believe in the team around me as much as I believe in myself. We have a lot of seniors that don’t want this season to end so we keep working to improve each week.

I would say I'm a hard-nosed runner who likes to hit head on. I can be shifty when needed, but always work hard to get the yards the team needs because they count on me just as much as I count on them.

My sophomore year Coach Vernon became the head coach and the atmosphere immediately changed. No more being undisciplined, not giving your all, or not being accountable. Coach Vernon has built this program up and I'm just honored to be a part of it.

We play in a tough league and are continually challenged.  Every week is tough and we wouldn’t want it any other way.

I’m blessed to play at NHS; the coaches, administration, student body, and parents all support the team. The supportive community makes all the tough hits and grueling practices worth it. We’re just working day by day to represent our community with wins.

We run a flexbone offense that can give the defense a lot of different looks. We're a team that likes to run the ball so fakes are important and we have backs that get the job done.

The crowd support is awesome, running out during a Friday night home game is an exhilarating experience that isn’t matched by other sports. And Nickerson is a physical team so you're going to see a lot of big hits and a well executed offense.

We have plenty of athletes on our team who are key players but I personally think credit is due to the O line who puts in the most work, but doesn’t always get the credit they deserve.

Football brings a brotherhood that you don’t get from other sports. The off-season work, difficult practices and intensity of games brings us closer together.

We’ve made some good runs beating top teams. A loss doesn’t deflate us, it just forces us to up our game and get better for next week.

Many of us are three sport athletes, and have a regimented lifting routine to become stronger, faster, and hit harder.

I’d be honored to continue playing football in any capacity. I have a lot of passion for the sport and am not ready for my playing days to be over.

I also play basketball and run track, but football is by far my favorite.

I would like to be a personal trainer or perhaps a coach.

My older cousin, Austin O’Toole, who was a former NHS football player who is currently playing for Sterling College. He has always pushed me in the weight room and been there for me no matter what.

I enjoy Flicks Bar and Grill, hometown food is the best.