v Faces in KS: Marshall Kellner - Sports in Kansas 
Warning: include(../includes/bodytag.php): failed to open stream: No such file or directory in /home/kansass/public_html/ks/news/index.php on line 36

Marshall Kellner is having a big season on the OL for De Soto. (photo: Derek Wall) 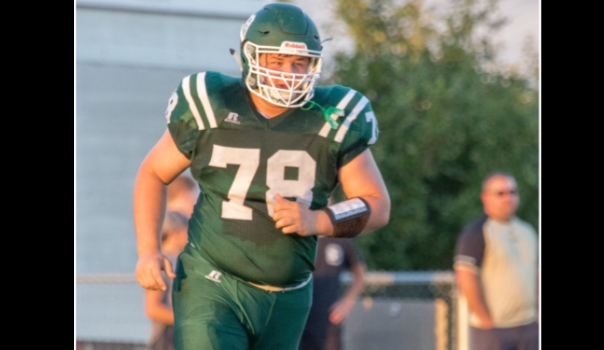 Kellner, a 6-foot-4, 290-pound, senior tackle, has been dominating his competition since the beginning of last football season. He has 62 pancakes this season through seven games. He also hasn’t given up a sack or quarterback hurry all year. Last season at guard, he had 69 pancakes on the year. Kellner also benches over 300 pounds and squats 440 while running a 5.2 forty-yard dash weighing nearly 300 pounds.

“Marshall is as hard working of a young man as I’ve ever met. He kills it in the weight room, classroom and on the field. He’s the best offensive lineman I’ve ever coached in 4A football.” De Soto offensive coordinator Mark Gastelum said.

Kellner grew up in Texas playing pee-wee football, eventually falling in love with the sport, before moving to Kansas in the eighth grade. He also approaches football like he would a job. A job that he really likes.

“I guess I approach this as I would a job; a job in which I have other people relying on me to do my part and a job that I love.” Kellner said.

Kellner’s success as a lineman has reached the spotlight this season because he has the De Soto Wildcats, led by head coach Brian King, off to a 7-0 mark in 2017. They are currently the #2 team in the state (4A-I) in the Kpreps Poll. De Soto is not known as a football power over the years as they have just seven playoff wins as a school. The last playoff win for the Wildcats came back in 2010.

In a run-first power football offense, it’s a system Kellner really thrives in as a lineman. He has helped pave the way for utility man Trevor Watts, running back Leo Oplotnik, running back Darren Winans and quarterback Bryce Mohl all season long. De Soto has also had solid defensive play all season led by linebacker Jack Barger and lineman Zach Titus.

“We play power football with many weapons.  Although we have thrown the ball much more this year, our foundation is the run game.  That makes it a lot of fun for an offensive lineman.” Kellner said.

It’s not all just about football for Kellner either at the next level although he does have two Division II offers. More importantly, he has a 4.2 GPA. We didn’t even ask how that happens, we just know that it means he’s smart. He plans to study Aerospace/Aeronautical Engineering. Kellner’s favorite subject in high school is math, specifically algebra and calculus.

For now, Kellner’s focus is in the 2017 football season and trying to knock off the #1 team in the state this week in the Bishop Miege Stags. The Stags (7-0) have won the last three 4A-I state titles and are a district opponent of De Soto. Last year De Soto was 7-3 on the year and lost 50-0 to Miege. De Soto is yet to be tested in 2017 as they have outscored opponents 296-to-43 this season and have guaranteed at least a share of the Frontier League title. Kellner knows this is by far the biggest test of the season.

“We just have to play our game. Miege is a great team and they do a good job of capitalizing on the other teams’ mistakes. We will need to play with focus and play mistake free. I can’t think of a better game to be a part of, number one versus number two.  It should be a great game.” Kellner said.

We caught up with Marshall in the latest Q&A edition of Faces in Kansas below.

I grew up in a house that loved football.  Until the eighth grade I lived in Texas, so I grew up playing Pee-Wee football in a town that shut down on Friday nights for the games.

My goals are for me to help my team win a state championship and to create opportunities for me to play in college.

I really think we do. We have so much talent and a great coaching staff.  Most importantly, we believe we can get it done.

What makes you such a force as a lineman?

I try to focus on technique. I also spend a lot of time during the offseason in the weight room and on agility exercises/drills.  I guess I approach this as I would a job; a job in which I have other people relying on me to do my part and a job that I love.

Overall, I guess I am a pretty quiet guy. I don’t get overly hyped or get down when things aren’t going our way. I have confidence in all my teammates and, above all, I want to make sure I am doing my part so I am there for them.

You guys have Miege this week, what will it take to be competitive and win?

Just play our game. Miege is a great team and they do a good job of capitalizing on the other teams’ mistakes. We will need to play with focus and play mistake free. I can’t think of a better game to be a part of- Number one vs. number 2.  It should be a great game.

Trevor Watts has been tearing it up lately, talk about that?

Trevor is an awesome player, and I am glad we are teammates.  He is a great athlete and great person. He works extremely hard and will be the first one to give props to the big guys up front. I think that what makes Trevor so good is he is always competing with himself. Some of the things he does on the field are absolutely amazing.

Power football with many weapons.  Although we have thrown the ball much more this year, our foundation is the run game.  That makes it a lot of fun for an offensive lineman.

We have a great fan base, band, cheer and dance team which creates a great atmosphere. Our stands are always packed.  Our supporters seem to be very proud of what we have accomplished so far this year, which gives the team a great sense of pride as well. We have so many big playmakers on both sides of the ball. It is just fun to watch.

Offense, defense and special teams. In my mind, everyone is a key player.  Our lines on both sides are big and physical, we have multiple weapons at running back and wide receiver with lots of speed, our linebackers have been fantastic, and our kicking/special teams game is strong.  Offensively, we have had some explosive plays, and defensively we have held our opponents to 43 points through 7 games.

Just competing as a team with my friends and the memories I know I will be able to take with me. I have to admit, I also like to get a good pancake.

It’s fun. Coach King can be intense, but the team feeds off his passion for the game and his passion for doing what’s right. He has really turned De Soto football around in his time as head coach.  His knowledge in strength and conditioning is a great asset to the players.  Coach Gastelum, our OC, lives and breathes football, and Coach Thaemert, our DC, has a great defensive mind. They are all very supportive and dedicated to our success.

How would you describe your guys’ start so far?

So far so good with a 7-0 start. We have had a lot of fun as a team this season and are focusing on staying humble and hungry.  We have a big test this week against Miege.

Just continue to put in the work, take it one game at a time and avoid injuries.

We put in lots of work. The whole team is very dedicated, and we have all been working toward the same goal since losing in the first round of the playoffs last year. That left a pretty bad taste in our mouths and is what drove us all summer long.

I would love to play at the next level. So far, I have an offer from William Jewell and from University of Central Missouri. I am currently talking to several other programs, as well.

You hold a 4.2 GPA, how important is the classroom to you? Favorite subject?

The classroom is extremely important to me. I love football but know that I can’t play forever. My parents instilled in me from an early age the importance of academics and its role in my success throughout life.   I really like math, specifically Algebra and Calculus.

I grew up playing football and baseball, but I chose to focus on football in high school.  It is what I am most passionate about, and I felt that I could gain the most benefit from spending my offseason in the weight room getting stronger and more agile.  I also spent much of that time really focusing on perfecting my technique.

I like relaxing and hanging out with my family.

I am interested in studying Aerospace/Aeronautical Engineering.  I hope to someday be designing aircrafts to improve travel efficiency.  I am really interested in the possibility of designing technologically advanced aircrafts for the United States military.

Coach Gastelum is a great role model. He holds players to a high standard and expects a strong work ethic.  He teaches us to always play with integrity and confidence.  He models this behavior in his daily actions.

There aren’t many choices in De Soto, Kansas, but I like JT’s Sports Bar and Grill.  They have a really good spicy chicken sandwich.

I like playing the guitar.  I never took formal lessons, but YouTube has been a great instructor.  I like to play songs by bands such as Guns n Roses, Metallica and AC/DC.