v Faces in KS: Micah Grover - Sports in Kansas 
Warning: include(../includes/bodytag.php): failed to open stream: No such file or directory in /home/kansass/public_html/ks/news/index.php on line 36

Micah Grover is one of the most accurate QB's in Kansas. (photo: Tiffany Cannan) 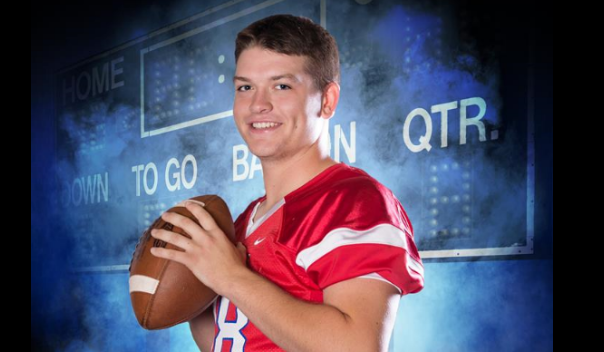 Grover has better size than most small school lineman in the state at the 3A level. In fact he very well could still be a lineman. As a freshman and sophomore, weighing 230 plus pounds, Grover started offensive tackle, linebacker and long snapper. Grover came in district play two years ago after the starting QB and backup were both injured and Cheney has never looked back. In fact, the Cardinals would go on to win the district in 2015.

"If it wasn't for offensive coordinator Coach Baldwin during my sophomore year believing in me I'd still be a starting lineman for our team right now." Grover said.

The quarterback position has seemed to work out nicely to say the least as Grover is one of the top 3A quarterbacks in the state. He has passed for 1,224 yards with 18 touchdowns this season through six games. Very impressive numbers, but what's most impressive is his accuracy and he makes very few mistakes. Grover has zero interceptions this season in 89 passing attempts. He has completed 72 percent of his passes on the year. It's not just a one year thing either, Grover only has five interceptions in 341 career passing attempts with 43 career touchdown passes, an 8-to-1 ratio. Grover can also run a little for his size as he has 659 rushing yards in his career with another 17 touchdowns, giving him 60 combined touchdowns in his Cheney career.

Grover may be best suited for baseball at the next level. Known for his hitting, he could also project to be a nice first baseman in college but he also pitches. He is also a basketball player for the Cardinals who finished as the 3A state runner-up last March .Grover is still keeping his options open for football, even though he tells us he may favor baseball.

Cheney doesn't just air it out either, they are a balanced pass/run offense. Grover's favorite target this year has been Trent Scheer who has caught 23 balls for 433 yards with six touchdowns. Hunter Adolph has also enjoyed a big year with 18 catches for four touchdowns. Trey Patterson also has 206 yards and four scores, while Lakin Petz has 146 yards with three scores. Riley Petz is having a huge year in leading the rushing attack with 899 yards and 12 touchdowns, while Grover has added 377 with 10 scores on the ground.

"Our line has been huge this year opening up holes and protecting the pass. We have a lot of skill guys with talent with all of them that can make a play." Grover said.

Cheney, led by head coach Shelby Wehrman, is undefeated on the year and will begin district play this week in which could be the best district in Kansas. Chaparral (5-1), Cheney (6-0), Conway Springs (6-0) and Garden Plain (6-0) combine to be 23-1 with only one playoff spot on the line. Cheney gets Chaparral this Friday. We caught up with Grover below in the latest edition of Faces in Kansas.

I’ve been involved in sports my whole life and football I felt the connection early when I would go to K-State games as a young kid and just loved watching it. Football I feel is the ultimate team sport where one guy can’t do the work it takes all 11 every snap to contribute to the goal in mind and that’s why I love it.

As far as goals I just play down by down and week by week. I don’t look ahead because in sports too many times if you look past an opponent that’s when you get beat then the ultimate goal that you were working for is all the sudden gone.

We absolutely have a shot and the best part about it if we’re going to make a run it’s not going to come easy so that’ll make it feel any better. I hear we’re in the toughest district in 3a but all that is an excuse for the loser and to make a run every single player will have to bring it and if we do that I feel we’ll be very successful.

The people around me are definitely what makes me the player I am. No player is good in football without their supporting cast. Our Offensive Line gives me enough time to do my thing and on the other end the wide receivers and tight ends catch the ball and make everything a force.

Our offense has a lot of moving parts, we are balanced Pass/Run and that makes us a threat because defenses have to respect both.  Our line has been huge this year opening up holes and protecting the pass. Our skill positions have talent down the line, you can lean on every single one of them to make a play when needed.

The way we play football is we have fun and fly around, we make games action packed. I think a lot of the publicity goes to those big schools for how much talent they have but in reality it’s the same game and I believe we can put up a fight with almost any team.

We have key players all around. I’d say this is one of the top offensive lines this town has seen. For sure our receivers are the most talented group on our team. Running back Riley Petz is becoming a rising star before everybody’s eyes. On the defensive side Jacob Howell, Brendon Dewey, and Zane Smith are playing very well for us right now.

I love how you have to come ready to play every single night and if you don’t you will get exposed physically.

Coach Wehrman I believe is bringing the passion of football to Cheney Ks. He brought so much knowledge of the game here and is so passionate at what he does and I tip my cap to our administration for going out and finding him.

We are off to a hot start but our reality check will come this week with 3 tough district games in a row.

We had football skills once a week and lifted 4 times a week and truly got better as a team.

I plan to play college baseball but have not out ruled college football just waiting to see what opportunities arise.

I like to play Xbox and just relax and hangout with family.

I see myself coaching and mentoring young kids.

My favorite subject is probably weights because we don’t have homework and you’re not using a pencil and paper.

I’d say Eric Hosmer of the Kansas City Royals because he shows how much passion it takes to be successful in sports.

You can’t beat China B & G buffet in Cheney on an afternoon.

That if it wasn’t for Coach Baldwin, our offensive coordinator, my sophomore year believing in me I’d still be a starting lineman for our team right now.