v Faces in KS: Sam Hardin - Sports in Kansas 
Warning: include(../includes/bodytag.php): failed to open stream: No such file or directory in /home/kansass/public_html/ks/news/index.php on line 36 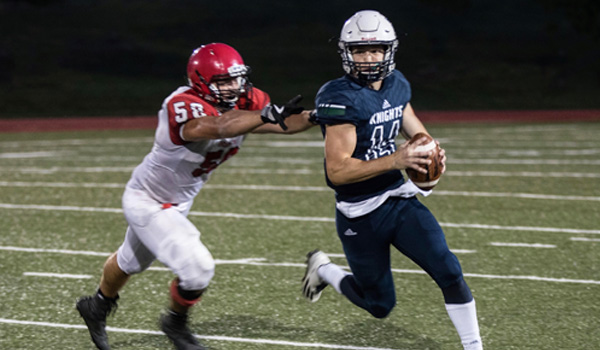 When it comes to players putting up numbers on Friday night across the state one that you can always count on to produce is Wichita Trinity High School senior Sam Hardin.

Hardin, a 6-foot-1, 184-pound, quarterback, has passed for 1,606 yards this season with 22 touchdowns in the first six games. Not only does he get it done with his arm in the spread pass-first offense that the Knights run, he also gets it done with his legs. Hardin has rushed for 563 yards on the season with four touchdowns. He is no stranger to success at the quarterback position as he threw for 1,362 yards and 15 touchdowns as a junior last fall, while rushing for 600 more yards with five scores. Hardin has thrown just five interceptions in 186 attempts this season. In last weeks game Hardin had 195 passing yards with six passing touchdowns and 122 yards rushing with a touchdown.

Trinity may not be where they want to be record wise at 3-3 but the three losses have been to quality competition. The three losses are to Cheney, Conway Springs and Garden Plain, all 3A teams, that are a combined 18-0.

The offense has also produced in every game this season. Seniors Caden Williams and Hillard Cozine have stepped up to be the top two targets for Hardin this season. Williams is among the leaders in the state in receiving yardage as he has 44 catches for 714 yards and 12 touchdowns. Cozine has 29 catches for 460 yards with eight scores. Senior Jacob Baker also has 16 catches for 238 yards and a score.

Trinity has produced multiple division one players as of recent including Morgan Burns, Tyler Burns and last year Ben Adler, all of whom signed with Kansas State. However with all those big time players they have never made the Kansas State High School Activities Association Playoffs. Hardin and teammates are hoping to change that this year.

The Knights, led by head coach Jared McDaniel, will begin district play this week as they face Nickerson. Their four team district consists of Nickerson, Clearwater and Wichita Collegiate with only two playoff spots in 4A-II on the line. We caught up with the play making quarterback below in the latest edition of Faces in Kansas below.

My father is a huge football fan. We would watch football every Sunday when I was around three. I looked up to my dad and wanted to do what he did.  Football is something he loved so I fell in love with it too. He coached my team from kindergarten to sixth grade.

My goal this year is to lead my team to state playoffs for the first time in school history.

Yes, if everyone is healthy, I believe we could make a run.

I’ve always been able to make plays with my feet, throw well on the run, and make pretty good decisions under pressure. I also have a great group of receivers who were willing to put in a lot of work with me in the offseason.

We run the spread and are a pass-first offense. I have one of the state’s best receivers, Caden Williams, and I have the best tight end in the area, Hillard Cozine. Those two plus my o-line, Jacob Baker and Mark Hedstrom make throwing the ball look easy.

Our stadium is one of the best small stadiums in the state. If you enjoy watching the ball get slung around, you should stop by.

The team aspect and the relationships that are made.

I love it. Coach McDaniel and I have developed a strong relationship over the years. He likes the same type of offense that I like, so we work well together.

We have 3 wins and 3 losses. Obviously not the most ideal record, but after each game, our team has come out better and more improved.

Everyone staying healthy and focused.

We had weights and conditioning almost every morning, our 7 on 7 team practiced every Thursday, and my receivers and I would throw at our field almost every day for a couple of hours. I also had many sessions with my QB coach from Tulsa, Joe McCulley, which my receivers would also attend.

Seeing interest but no plan yet

No, I played basketball up until last year. I wanted to put on more weight in the offseason and focus on football.

Hang around with my friends or family.

Hopefully with a great wife and a great job; right now, I am thinking about dentistry or medicine.

My favorite subjects are the sciences or the religion courses. I am an A student, with only a couple of B’s thrown in there.

My parents. I mentioned my dad earlier. He would say my mother is where I get my athleticism. She played basketball at Kansas State. Both of my parents have a firm relationship with God and that’s something I look up to.

Way too many good choices in Wichita, but love Firebirds and Chester’s for special occasions.

I have watched “The Office” on Netflix more than five times through.