v Faces in KS: Tristan Lee & Dalton Sporing - Sports in Kansas 
Warning: include(../includes/bodytag.php): failed to open stream: No such file or directory in /home/kansass/public_html/ks/news/index.php on line 36 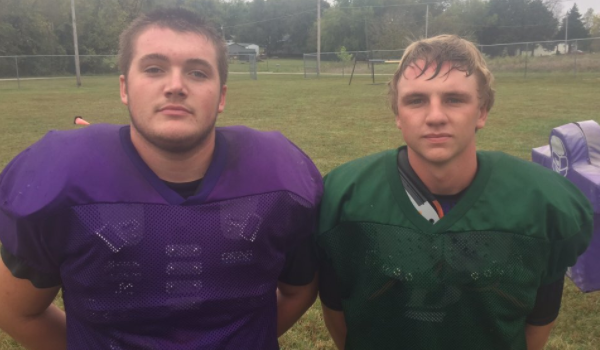 The Burlingame Bearcats will make the 280-mile round trip northwest to Clyde on Friday night for a battle of unbeatens matchup with the Clifton-Clyde Eagles. The two teams enter Friday’s game with identical 5-0 records and the Bearcats will be going for their 24th consecutive regular season win, but the task will be hard in visiting territory.

The Bearcats have outscored their opponents 295-20 this season and have given up points in just two games, while posting three shutouts. The Eagles on the other hand have outscored opponents 283-12 and have also given up just six points in two games, so Friday night should be a game to watch in the class 8-Man Division 1, District 3 standings. The Eagles currently have the No. 1 seed, while Burlingame is in second.

The Bearcats have been rolling this season and a big part has been quarterback, Dalton Sporing. Sporing has been the quarterback all four years for the Bearcats and has thrown for 3,710 yards and 76 touchdowns in his time on the field. Sporing has only played in three games this year, because of a torn MCL suffered in basketball season this past February. Sporing says that he is back to 100 percent and is getting the timing back with his receivers and such. Sporing was a workhorse his junior season, passing for 1,430 yards/33 touchdowns, while rushing for 1,221 yards/30 touchdowns. His efforts helped guide Burlingame to the 8-Man Division I semifinals for the second consecutive season.

Sporing gives a lot of credit to his offensive line and it all starts up front with Tristan Lee. Lee, a 5-foot-10, 240 pound senior has paved the way for Sporing and other guys to break free for big gains. Lee earned first team all-league honors as a junior for offensive line and defensive end. Lee is hard to block if you’re an opposing team’s offense, because of his size and speed, he’ll track you down no matter where you’re at on the field. Lee currently has 54 tackles so far and is averaging over 10 per game.

The Bearcats’ success has improved ever since coach Jeff Slater took over the program for the 2014 season. Slater took over a program that went 3-6 in 2013, but flipped the script in 2014 with a 6-3 record. Then the success really started showing, as the Bearcats went 11-1 the past two seasons and have played in the 8-Man Division 1 state semifinals both of those years, so a trip back deep in the playoffs is definitely a possibility for Slater’s led Bearcats. Burlingame hasn't played for a state title since 1972 when they won 1A. They've never played for a title in the 8-man ranks. They have four semifinal appearances as a school, two in 8M-I, both under Slater, and two in 1A back in 1971 and 1972.

We caught up with the two oustanding 8-man seniors below in the latest edition of Faces in Kansas.

I started flag football in kindergarten and tackle football in the second grade. It was what all my friends did so I was just sort of a tag along.

My main goal for the season is to lead our team week in and week out to get to Newton.

We have one of the best offensive lines in the state in our division, they do the work so I am able to run free in open field or stand tall in the pocket. We are on the same page and I often have only one or two guys to beat. I am a balanced quarterback between my run and pass game.

For anyone that hasn’t seen an 8-man game, why come to one?

The quicker tempo of the game and the different schemes. It allows the athletes to shine a little bit more due to less people on the field.

Take us through the injury how it happened and what the recovery process has been like and where you’re at now?

Late last February I jumped for a rebound in our last regular season game of the year.  It was something I had done numerous times before. When I landed, there was a pop in my knee and I automatically knew something wasn’t right. I was hoping I had just re-torn my MCL like I did Freshman year. The recovery process was grueling. The first three nights post-op I remember getting only a few hours of sleep a night, every move you make there was a sharp pain through the knee. At the time of the injury, six months felt like forever away. After the first three weeks when I could  finally walk again it sped up a little bit. I could see improvement in my knee week by week which helped my confidence immensely. It took hard work and a “never quit” mind set during the hours of therapy. Now I am back to full speed and getting the timing back down between the receivers and myself.

My favorite thing about football is the hometown atmosphere we take everywhere we go.

What has it been like with Coach Slater being the coach at Burlingame?

Intense. He is a high energy coach that gets more out of us than we see possible. Coach sees things in film that I would never catch on my own that really help me to accell on Friday nights.

We have had a good start. We still have things we need to fix, but the good thing about it is that everything we see is on us. It isn’t anything the opposing team has been doing that has us scratching our heads, it is a lack of us staying focused and getting the job done that we need to on any given play. It’s hard to be too upset with a 4-0 start.

What has the town been like after you guys made the semis the last two years?

The community has been electric every Friday the past three years. It is all I have known to play for. Looking at the sideline and seeing nothing but purple is and screaming fans really gets us going on game days.

Absolutely. We will have a tougher first round than usual this year, but it is nothing we won’t be able to handle.

We have a lot of talent on our team this year. On offense we have Colton Noonan who will go up and compete for any ball I throw his way. On the defensive side of the ball we have our two defensive ends. They cause havoc every game and have to be an offenses nightmare. Any of the skilled positions on offense are liable to break open a run at any time. Our offensive line gives a great push upfront which allows us to have multiple blocks to run off of.

The biggest thing we did was get in the weightroom. I think we are a stronger and faster team this year than last year.

It allows me to get around some of the bigger, slower players.

I am still keeping my options open and am still undecided. I have not yet received any offers.

I play basketball, baseball, and do track along with football.

I am usually with my teammates hanging out. We are with each other more than our families most times during the Fall.

In 10 years I hope to be working in the field of physical therapy in one way or another.

My favorite subject in school is science. I have been a 4.0 student all four years of school.

My role model is my grandpa on my mom’s side. He is a genuinely good guy who treats everybody with the respect he expects in return.

Best place to eat in Burlingame or the surrounding area?

The closest good place to eat is Buzzard’s Pizza. It is seven miles away in Osage City.

I like to hunt and fish in my free time.

I started tackle football in 2nd grade because I thought it looked fun and it was!

What're your expectations for the rest of the season?

You're off to a 5-0 start and play unbeaten Onaga on Friday night, how has your team been preparing for them?

They come off the line hard and are physical so we have been working on our first steps this week. They are a good team and we need to show up and play our best.

I love 8-man football. It's a faster pace game which makes it really fun.

Your team has won 23 straight regular season games, how cool is that?

It's pretty cool but I really want to make it past the sub state game this year, that has gotten us the past two years

It is just a fun environment, there is nothing like game days. All day is about football

What makes you so hard to defend when you're on the defensive line?

What's your favorite thing about football?

Playing alongside my best friends.

Do you have any pregame routines?

What will it take to make a deep playoff run this season after losing in the semis the past two seasons?

Improving our physicality as a team

I play basketball and throw in track

Fishing, being with my friends, and reading comic books

What's one thing most people don't know about you?

What're your plans for college? Major?

Who has been your role model growing up?