v Faces in KS: Nick Davenport - Sports in Kansas 
Warning: include(../includes/bodytag.php): failed to open stream: No such file or directory in /home/kansass/public_html/ks/news/index.php on line 36

Nick Davenport of Ell-Saline is a big armed QB that has his team 4-0. (Huey Counts, Salina Journal) 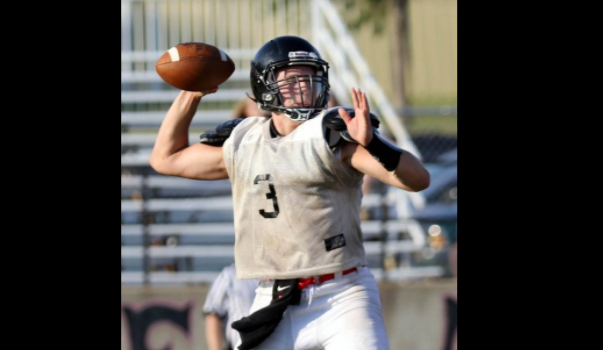 Two football seasons have passed and the Ell-Saline Cardinals still have a bitter taste in their mouth after losing the 2014 class 2-1A state title game to Olpe, 26-24. The Cardinals struggled to win in the 2015 and 2016 seasons, as they had just seven wins combined from those two seasons, but junior quarterback Nick Davenport and the Cardinals are feeling confident with their 4-0 start to this season.

The Cardinals have wins over Sedgwick, Remington, Moundridge and most recently Inman so far this season and will take their unbeaten record to test on Friday night with a home game against Hutch Trinity, a team that is 4-0 as well.

Ell-Saline has been clicking on all cylinders and Davenport, now a three-year starter, has been the leader on the offensive side of the ball passing for 603 yards and six touchdowns through four games. While the offense has been putting up a lot of points, the defense hasn’t allowed many points. Treyton Peterson leads the defensive unit as a freshman with five interceptions, a forced fumble, fumble recovery and 13 tackles already for the Cardinals. Davenport leads the defense with 28 tackles on the season and a sack.

Not only does Davenport get it done on the field, we also saw him at a combine this last May and were very impressed with his big arm and size at 6-foot-1, 210-pounds. Davenport won a long pass challenge at a camp this summer going for 64 yards. He definitely has a live arm.

Davenport isn’t just making himself known on the football field, as he’s also a wrestling state qualifier. Davenport is a member of the Cardinals’ track & field team in the spring and competes in the 4x400 relay, discus, shot put and javelin. He says playing multiple sports is a big part of his athletic success, because each sport helps one of the others out in various ways.

The Cardinals are led by coach Terry King, who has been around for awhile and has had a lot of success for Ell-Saline. Davenport describes King as an “old school, hard nose, encyclopedia of football knowledge.” It’s safe to say that the Cardinals players respect the game and the knowledge that King brings to the table.

When Friday comes around in the small town of Brookville (population 263) the entire town is usually at the football field. It’s a true Friday Night Lights experience and a very supportive town and community according to Davenport.

Be sure to nominate the Nex-Tech Wireless Central Kansas Athlete of the Month by emailing Chet Kuplen at sportsinkansas@gmail.com

You guys are off to a 4-0 start, how have the first four games been for you and your team?

This year has been fun so far.  We have worked hard to change our offense so that we are stronger in the passing game and more efficient as a whole.  Each week we are focused on working on what we can improve on.

You've got a big game with an unbeaten Hutch Trinity team on Friday night, what are your expectations for that game?

We know this will be a tough game and Trinity will give us a good test to see where we are so far this season.  I expect us to come out focused and execute a full game plan with minimal mistakes.

How has practice been this week in preparation for Friday?

Practice has been really good this week.  We've been focused and there's a lot of enthusiasm, our coaches have done a good job of preparing us for what we will see on Friday night.

Your team went 3-6 last season, so how does it feel to already have more wins this season?

It's great to already have more wins than last season but we feel we have a lot of potential this season and we know we are capable of competing at a high level. We are excited to be where we are right now but we definitely expect we can accomplish more.

Who are some other top players on your team?

This one is tough because everyone is contributing a lot this year but I would recognize the leadership we have gotten from our seniors this year more than anything.  Guys like Avery Bradley, Spencer Came, and others have really stepped up this year and set the bar high for all of the team.

Coach King is an old school, hard nose, encyclopedia of football knowledge.  He understands the game very well and he has taught me a lot about understanding the concepts of football.  His philosophy is to be straight up tougher than your opponent and to outperform them physically. This is my third year under Coach King, I enjoy and respect him as a coach and a friend.

The last two seasons your team has struggled record wise. What is it about this year's team that is different?

This year we have a lot of experience on our line and we also have a lot of weapons in our skill positions.  Generally we have come closer as a team this year and formed a stronger bond than we have in the past.  Each week we go out there and play for each other.

Do you feel like this team is rebuilding after a run to the state title game in 2014?

We definitely are building back up but we are also trying to build a solid program so we can be successful in the years to come.

You're also a state qualifier in wrestling. How does wrestling help you with football and vice versa?

There are so many things that wrestling has done to help me with football like building strength, mental toughness, and self-confidence just to name a few.  Conditioning in football helps me with endurance and staying in shape for wrestling.

What is there to do in Brookville? Are you a Salina or Brookville resident?

The main thing to do in Brookville is go to school or a game.  Other than that there isn't too much to do.  I live outside of Salina but not in Brookville.

Usually everyone's excited for the game and sometimes we have a pep rally to get us hyped.  Game days are great because it's an activity the whole school enjoys and takes pride in.

Do you have any game day routines?

My routine consists of getting taped, reviewing plays on the white board, and then getting my arm warmed up.

The college teams I like are Kansas State and Texas.  In the NFL, I like the Dallas Cowboys

How long have you played football? Always been a QB?

I've played football starting with flag football, then salvation army, and then in middle school and high school with Ell-Saline.  I have always been a quarterback and I love playing the game.