v Faces in KS: Peyton Lane - Sports in Kansas 
Warning: include(../includes/bodytag.php): failed to open stream: No such file or directory in /home/kansass/public_html/ks/news/index.php on line 36 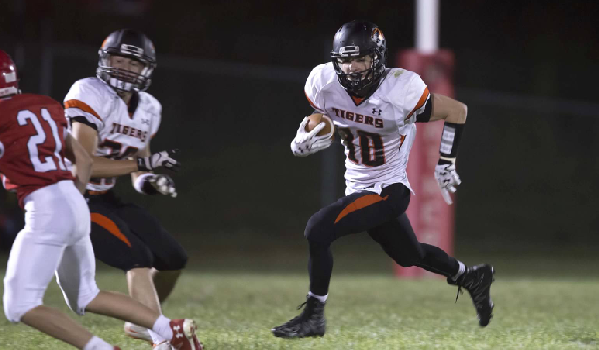 Peyton Lane of Clay Center is one of the top small school multiple sport athletes for the Class of 2018. His name seems to come up across all three of the seasons in Kansas over the last few years.

The senior is an all-state candidate this season at defensive back where he has become a tackling machine, racking up 48 tackles over his first four games of the season for the Tigers 3-1 start. He had 125 tackles last year and has 222 over his career at Clay Center. In wrestling he placed sixth in the state as a junior last winter and has qualified all three years to 4A state so far. His best sport may be track and field where he is the 4A state pole vault champion in 2016 and 2017 as a sophomore and junior. Lane's PR mark of 15'6" won the 4A state title last May in Wichita.

He has options at both football and track and field at the next level and may plan on doing both. Lane, who plays quarterback and free safety for the Tigers, projects as a safety at the next level. He is 6-feet tall and weighs 180-pounds. He is an athletic defensive back with decent sped in the 4.6-4.7 range and features a 35.5" vertical.

Lane has the Clay Center Tigers off to a 3-1 start in 2017 as they have won three consecutive since dropping their opener to 3A power Phillipsburg. His 48 tackles rank second in 4A-II this season and he has also intercepted one pass. As a quarterback he has added six touchdowns combined rushing and passing so far through four weeks.

Clay Center, led by head coach Todd Rice, will play fellow NCKL opponent Marysville (3-1) at home on Friday. The Tigers are looking for back-to-back playoff apperances this season for the first time since they did it in 2012 and 2013. Clay Center has never made it past a semifinal appearance with the last time going to the semis was 1983. We caught up with the oustanding senior multiple sport athlete below in the latest edition of Faces in Kansas.

This feature is presented by Old Chicago of Manhattan. Visit us at 2001 Clock Tower Pl. in Manhattan. Find us online by clicking here

My dad was a coach at Campus High School when I was young and when we moved to Clay Center he was also one of the coaches here so I was always around it when I was younger.

My goal this season is to help lead my team into the playoffs and make a run. We had a rough start to the season but things are going good for us now.

Last year my main position was free safety and with the teams we play we see a lot of good running backs and run heavy teams. Being put in the position to have to tackle a good back in space or coming down hill is tough but we work it in practice a lot an when it comes to the game my adrenaline hits and there is nothing better that getting a good hit in.

After the big loss to a really good Phillipsburg team we had to refocus and we are taking it week by week. For now our focus is on winning a league tittle. The rest will come when necessary.

I think that we have a good chance to win a few play off games this year. The thing about our team is not that we are big and tall but we are quick and have a lot of toughness. We know what it is going to take to win and we are working hard on it every day.

Our offence has been a really big run heavy team the past few years and when we have 3 guys out wide and in the tight end position over 6’2 with nice hands it has opened a lot of things up. We also have a good back up QB who is a sophomore, Cooper Glavan. Playing both sides of the ball I need some time to come out and he has been able to come in a drive the ball and is a great passer. Wide outs – Anthony Atkinson Enneking – Connor Last – TE Wyatt Alexander.

Slot back Caleb Mendum is one of our fast running backs with experience.

Gavin Siebold – middle linebacker, one of the toughest guys we have, I expect him to make an all league/state run this year, he is a great tackler and is one of the state leaders in tackles.

This summer I was in the weight room 6-7 days a week as well as working on footwork and running plays. I went to a few senior showcases at colleges and think I got some good things out of those.

Coach Rice is awesome, I think he really cares about all the guys and he does a good job making things pretty fun.

I’ve been looking at a few places and just went on a visit to Pitt State. I am planning on doing football and track in college next year.

I have wrestled and done track the past 3 years qualifying for state in wrestling 3 times and placing 6th in 2017 and track 2 times winning 1st place both in 2016 and 2017 in the pole vault.

In the summer I like to go swimming and go to the lake with my friends. Also I Play Disc Golf.

Hopefully working at a chiropractic office.

My favorite subject in school is probably English.

Best place to eat in Clay Center or the surrounding area?

My shoes match my outfit everyday.