v Faces in KS: Brendan Webb - Sports in Kansas 
Warning: include(../includes/bodytag.php): failed to open stream: No such file or directory in /home/kansass/public_html/ks/news/index.php on line 36

Brendan Webb of Buhler is one of the states top recruits for 2018. (photo: Jolene Reed) 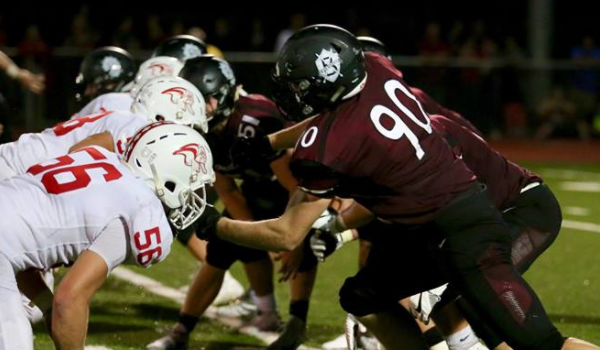 If there were a freaks of Kansas high school football list, Buhler High School senior Brendan Webb is a guy that would be near the top of that list. The 6-foot-5, 215-pound, senior, football player, can do things a lot of people his size simply can't do in sports.

What exactly do we mean? Well the senior defensive end and tight end is a sprinter in track and field, a jumper in track and field and also a thrower. Sure many people can try to do that, but wait until you see Webb's marks. He throws the shot 54-08.25 which was near the top in 4A last season, has a 44-2 triple jump also near the top, runs the 200 in 23.6, has a 142-10 toss in the discus and goes 171-05 in the javelin. He was also a part of the 4x100 relay. A 6-foot-5, 215-pound sprinting defensivel lineman? All those marks, with maybe the exception of the 200 meters, are all-state caliber track and field marks year in and year out for 4A. How many lineman do you know that can run that fast, throw like that and jump that far? Personally, we dont know many if any that we have ever had like that in Kansas. We definitely have seen our share of guys that can sprint at a high level and throw at a high level in track and field that were also star football players. Not that we are saying Webb is this caliber of football player just yet but a few of those sprint/throws/football guys are Lance Lewis (Scott City/Nebraska), Mark Simoneau (Smith Center/KSU/NFL), Monty Beisel (Douglass/KSU/NFL) and Ian Rudzik (Ulysses/KSU). Pretty good list, right? But none of those guys were 44-foot triple jumpers in addition to that and none were 6-foot-5. So yes, Webb is one of the biggest freaks of high school football in our state for 2017-2018. Oh and just a side note, if you're called a freak in sports, that's a very good thing.

So its football season and why all the track and field talk, what exactly do these marks mean? It means explosiveness and that's what recruiters are looking for. As we mentioned with the other athletes above from the past, those marks are a great measuring stick for college recruiters to judge how athletic and explosive someone like Webb is. For all you non track and field people we will give some other measurables as Webb also has a 37-inch vertical and a 4.6 40-yard dash time. It has sparked so much interest this past off-season that Division I ranked FCS programs Illinois State and South Dakota have both offerred. There are several FBS programs also on Webb and we could see an FBS offer happen soon. Webb will have to get stronger and adapt to college football in the long run, but there's no question he has the frame, speed and athletic ability that college coaches drool over. We aren't college coaches or recruiters by any stretch of the imagination but we do connect the dots to promote kids in this state and follow recruiting as closely as anyone in Kansas you will see. What we see in Webb is a very good college prospect that projects to be a very nice athletic defensive end or tight end at the next level. He has better measurables than many we have seen at either position over the last five years.It's up to the college coaches to decide on what level or team he is capable of going to. But we do feel like FBS programs are sleeping on this rising 2018 product out of Buhler, with that being said FCS is still a very high level of Division I football for Webb to land at and he already has received those opportunities.

Buhler returned a loaded cast of players this season including Sports in Kansas All Non-Senior players Dalton Brown at running back and Dalton Smyres at wide reciever. Lawson Schultz and Braden Rose figure to be two of the top lineman in the 4A-I class this season. Rose and Webb form what may be the best defensive end duo in the state this season. Jhet Burkhart is back at linebacker this and Ben Epp has stepped in nicely at quarterback so far in 2017.

For now Webb is focued on the football season and trying to get his team back to the state title game, a place they were last season as they fell to Miege to take 4A-I state runner-up. Webb knows they have to take it one game at a time and stay healthy when district play begins in week seven of the season. The Crusaders play a loaded schedule, in fact in their league Augusta, Buhler, Maize, and McPherson all sit at a 3-1 record and all are in the brutal AVCTL-III. Buhler fell to McPherson in week one and since then have won three in a row including wins over ranked Collegiate (4A-II) and Maize (4A-I) last week. Buhler will be back in action this Friday against Winfield.

Buhler, led by head coach Steve Warner, is looking for its first state title since they won the last year ever of 4A back in 2013. However that will be short lived as 4A will be back in effect for 2018 fall with the new classifications, elminating 4A-I to 4A and 4A-II to 3A. We caught up with the outstanding senior below in the latest edition of Faces in Kansas.

Be sure to nominate the Nex-Tech Wireless Central Kansas Athlete of the Month with Sports in Kansas by emailing Chet Kuplen at sportsinkansas@gmail.com

My family has always been very into sports, my Father rowed for the Coast Guard, my Mom was very active in Track and Field, and my grandfather (on my Mom’s side) played for the University of Texas and could have gone to the NFL.

My favorite sport is a tossup between Track and Field and Football. Football is probably my favorite because it’s very family oriented.

What makes Buhler such a special place to play and go to school at?

Buhler’s coaches aren’t just coaching because they can, or it gives them a little money. They do it because they have a passion for the sport itself. The staff here at Buhler want to see you succeed as well.

Can you guys make a deep run in 4A-I this year?

Yes! I have no doubt we can, we have eight returning starters on offense and defense. We went to state last year and lost to Bishop Miege, that loss has fueled the fire for our ride to the path to success.

What was the experience like getting to go to a title game last year?

It was honestly jaw dropping. I went to the state track meet and it was nothing like the state football game.

Describe yourself as a teammate and as a player, what style of player are you?

I’m the type of player that fits into the machine of football. Football isn’t an individual sport, we all have to do everything right and then something big may happen. If I don’t make the big sack, but our DB gets a pick six. I did my job by rushing the quarterback.

What is it like to play for the coaches at Buhler?

Everyone is completely passionate about which position they coach. They actually want to be there.

Well with Track and Field many of the events teach you different ways of being athletic. Shot Put teaches me to be more and explosive. 4x1 teaches me to trust the man in front and behind me and to run like your hair is on fire. Javelin teaches me that form is more important than strength, of course having both makes the jav fly far though. And finally Triple Jump helps me with balance, form, and strength.

How are you able to run and jump like you do for your size?

I honestly don’t know. I’ve been blessed with many gifts and I feel like I use them well.

Are you being recruited by anyone, what offers do you have?

I went to a lot of college camps this year. They all taught me new things that have helped me with football.

Best place to eat in Buhler?

Hopefully I’ll be working for FEMA and I’ll be walking the around the rim of a volcano seeing if there will be an upcoming eruption.

I love to write poetry.