v Faces in KS: Gabe Pieschl - Sports in Kansas 
Warning: include(../includes/bodytag.php): failed to open stream: No such file or directory in /home/kansass/public_html/ks/news/index.php on line 36 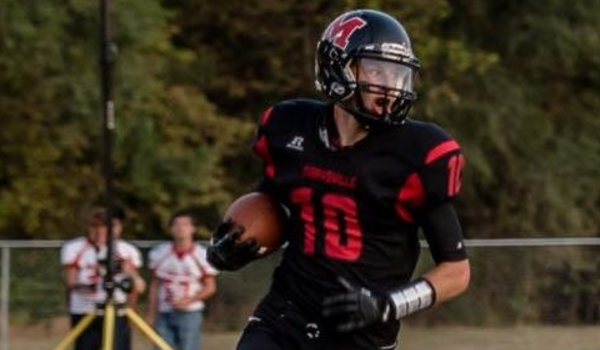 Last March Marysville won the 2017 3A state basketball title 45-37 over Cheney at Hutch Sports Arena bringing home their first state title in boys basketball since 2003 and third in program history. Gabe Pieschl, then a junior, scored 71 points over three state tournament games to lead his squad to a 22-4 mark on the year. Pieschl was named the Sports in Kansas 3A Basketball Player of the Year for his accomplishments as a junior after averaging 21 points per contest over the 2016-2017 season.

We knew Gabe was a basketball player but this season he has opened the eyes of many with the stats he is putting up on the football field on Friday nights for the Bulldogs. The 6-foot-3, 165-pound, senior receiver, has hauled in 14 passes for 437 yards receiving with six touchdowns in just three weeks. What sounds like a successful season stat line for many is something that he has done it in just three weeks. Pieschl is ranked third in receiving yardage in all classifications of Kansas so far this year on the Sports in Kansas stat leaderboard. Not bad for a guy who had just 16 catches for 283 yards in his entire career entering his senior season, right? Well not only that he has the Bulldogs off to a 3-0 start and has people around Kansas wondering just how good this 2017 team might be.

A big reason of the production on the football field with Pieschl is the connection with 6-foot-2, 170-pound, senior quarterback Jack Blumer. Blumer has been oustanding in his three starts this season completing 41 of his 56 pass attempts for 751 yards with 12 touchdowns and zero interceptions. He has also added four scores with his legs. When he connects with Pieschl its for an average of 31.2 yards this season, including a long of 73 that went for a touchdown. In the week one 52-13 blowout win over 3-time defending 3A champ Rossville, Blumer threw for 316 yards and six touchdowns. Four of those touchdowns and 192 yards went to Pieschl. Pieschl wasn't done yet with just the big game receiving against Rossville either, he had two interceptions in the contest. So far, by stats, it has been the top QB/WR duo we have seen in 3A football for 2017.

These two have Marysville, an NCKL team, in the converstation as being a contender in the loaded 3A classification. What do we mean by loaded? Well 4A-I, 4A-II, 5A, and 6A all have just 32 teams. 3A has 64 teams, which adds an extra playoff game and there are some loaded four team districts with just two playoff spots to come out of district play. In fact, at this point there are 21 unbeaten football teams in 3A out of the 64 total 3A football teams. To compare this to a class just above 3A, 4A-II has five of its 32 total teams undefeated. Marysville was ranked fifth in this loaded classificaton in this weeks poll from Kpreps.com as they picked up a 50-13 win over 4A-I Wamego last Friday. The Bulldogs are a team that go back and forth on East and West brackets because of their location and depending on who's in the classification in the two year cycles, but this year they are 3A West. 3A East has been controlled by either Silver Lake or Rossville going to the state title game every single year since 2002 with the exception of one year and that would be the 2009 Marysville Bulldogs, when they were on the East bracket. 3A West is a bit more open with four different teams that have played for the title in the past five years including Scott City twice, Collegiate, Hesston, and Beloit. Collegiate and Scott City are both now up to 4A-II. No path is easy to get to a title game, but you get the idea of how tough 3A can be.

Pieschl did it for his basketball team last March on the biggest stage by stepping up in the state tournament and bringing Marysville back a state title for the first time in 14 years. Can he help propel the football team to championship caliber this season? We shall see as the Bulldogs are looking for their first appearance in a state football title game since 2009. Marysville has never won a state football title in the modern playoff era (1969-present) but have taken second twice in 2009 and 1990. But it's early and we still have a long season of football ahead and what really matters is weeks seven, eight and nine in district play to even be in the conversation, but they are certainly off to a very hot start in 2017. Bulldogs have one of the toughest districts on the 3A west with Beloit (2-1), Minneapolis (2-1) and Riley County (3-0). Marysville, led by head coach Dustin Heuer, will be back in action this Friday on the road against 4A-II Concordia (1-2). We caught up with the outstanding senior multiple sport athlete below in the latest edition of Faces in Kansas.

This feature is presented by Crist & Pieschl, Rehabilitation P.A., proudly supporting the Marysville Bulldogs in 2017-2018!

How did you get involved in football and basketball?

I started basketball in 2nd grade because the 3rd graders needed a point guard.  I started flag football in 3rd grade and tackle in 5th.

Do you play any other sports besides basketball and football, if so which ones?

No. I played baseball until I was a sophomore and then decided I wanted to spend more time working on basketball.

What do you plan to do at the next level, how tough is the recruiting process from small town Kansas?

I would love to play basketball in college but am finding the recruiting process is tougher when you are from a smaller school.  Sometimes the kids from smaller schools get overlooked.

What makes Marysville a cool place to play?

The competitiveness of our programs have improved in the last few years.  Our students and community are really excited about our success and now we have a lot of community support.

We want to win the NCKL league, finish regular season 9-0 and win our 1st round playoff game.

How good of a QB is Jack Blumer?

He's amazing.  He's a quick decision maker and dual threat that can run as well as pass.

Is it a surprise for you all to start the way you did?

Coming into the season was a little bit of a question but we all worked hard this summer.  We had a lot of tough kids to replace but have some kids that have really stepped up and are doing a good job.

Can you guys make a deep run in 3A this year in both sports?

I believe we can.  Football may be a little tougher than basketball but we seniors are very competitive and motivated.

What position and sport do you plan on playing at the next level?

I would love to play basketball as a guard in college.

How has being a multiple sport athlete helped u in football & in basketball?

Being a multi sport athlete has allowed me to develop skills in one sport that I can use in the other sport.  There's alot of cross over.  It's sometimes tough juggling all the demands of playing both at a high level but I can't imagine not playing either one.

My mom.  She is amazing and my biggest fan.  She gives me pep talks and fires me up before games and is always pushing me to be better.  My mom even broke her foot rebounding for me last year.

What’s it like being perhaps the best 3A basketball player in Kansas?

Its such an honor to be considered that!  I couldn't have done it without my teammates support and that of my coaches.  I've spent many hours working towards being the best I can be.

What is it like to play for your coaches in all sports?

It is demanding.  They push me and want the best out of me.  They don't allow shortcuts.  Coach Heuer encourages us to be great at everything on and off the field.  Coach Brown is the toughest coach I've ever had which has pushed me to become the player I am.

Who will be teams to watch this season and in your league?

Nemeha Central, Phillipsburg, & Silver Lake.  There are alot of really great 3A teams across the state and its definitely a tough road to state.

Who are some other key guys to return for you this year?

Obviously Blumer at QB.  We've got a really strong receiving core and are very athletic and deep in that position.  Meinhardt, Sparks and Mooradian are key components to our offensive line.

I spent a lot of time in the weight room, at 7-on-7, and playing AAU basketball for SSA Hoops.

Best place to eat in Marysville or surrounding area?

My favorite place is El Ranchero.  Their combination dinner #10 is awesome.

Weights class is great but if I had to choose a required class it would be history.

I'm shy until you get to know me.