v Faces in KS: Travis Theis - Sports in Kansas 
Warning: include(../includes/bodytag.php): failed to open stream: No such file or directory in /home/kansass/public_html/ks/news/index.php on line 36

Travis Theis had 1,975 yards rushing as a sophomore for Pratt. (Photo: Bill Rea) 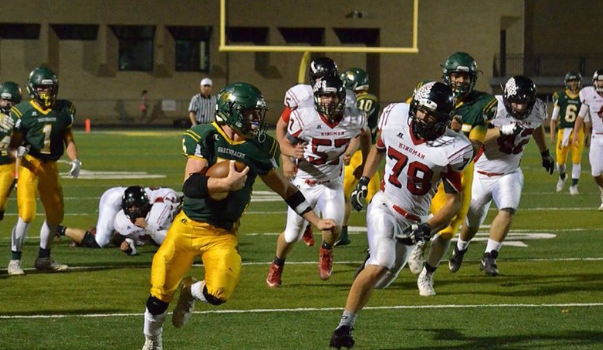 When doing features around the state we talk to many of our advertisers around that specific town and that always sparks a converstation about the local football team. It's what small towns in Kansas have to talk about it and we are very proud of that in our state. One thing we commonly heard in Pratt, Kansas was Travis Theis. "Have you seen the kid play, we've had some good ones around here, but I dont think one ever quite like him.", one local business man told us. Well we have and we agree, he is the real deal.

The Pratt junior running back was one of the best players in Kansas last fall as a sophomore in helping the Greenbacks to a 4A-II state title under head coach Jamie Cruce. It was just one year removed from a 4-5 season, that many would say a "came out of nowhere team". However Pratt had some key injuries and lost some heartbreakers in 2015. That's long gone after the state championship season last year. Theis was a first team All Non-Senior from Sports in Kansas and was on every 4A-II all-state team that was published. He rushed for 1,975 yards last season as the Greenbacks got their first state title since 1995.

This season has been no different and maybe on a whole new level. Now a junior, the 5-foot-9, 185-pounder, has rushed for 746 yards and 12 touchdowns in just three weeks. His biggest performance came in week one where he had 437 yards and six touchdowns in the win over Larned. Theis now has 3,191 yards rushing and 45 rushing touchdowns in 25 career games since starting as a freshman at quarterback in the flexbone offense of Pratt.  Theis is also the extra point and field goal kicker for the football team. Already so accomplished but still has a lot of football left to play.

So what makes this running back from Pratt so special? He's not the biggest guy and not the fastest guy. It's hardwork and hours spent in the weight room. Theis is so explosive that at 5-foot-9 he could dunk a basketball as a sophomore in high school last year. He was part of the state runner-up Greenback basketball team in 4A-II for 2017. Theis cleans 335-pounds and squats 515 pounds. There's division one college running backs that aren't doing that currently at programs across the country. He is the true definition of a "weight room warrior". He is pound for pound one of the strongest players in Kansas and in our opinion the top 4A-II football player in this state, and ranks near the top of all-classes. Will he be division one, division two, or even a baseball prospect? We don't know and that's not for us to decide. We do know one thing, Theis can flat out play high school football on Friday nights in Kansas.

Theis could also materialize into a baseball prospect at the next level and has some options in that sport. He has hit .489 combined over the last two seasons. He had 33 hits, three homers and 26 RBI last season as a sophomore in 22 games. As a freshman in 2016, he hit .591. No matter what he is doing, he seems to produce.

Pratt, now ranked in the latest Kpreps poll at three, will get Lyons (0-3) this week. Pratt beat CKL rival Nickerson 28-14 this past Friday night. Quarterback Landen Studer has five touchdowns this year and 348 yards of offense after three weeks, while juniors Cadence Riner and Kaden Blankenship are each averaging over seven yards per carry. The Greenbacks weren't ranked at the beginning of last year in 2016 and weren't either this year, maybe due to the fact of only four offensive starters and one defensive starter back from last years state title team.

Pratt plays in the CKL, one of the best 3A/4A-II leagues in the state, where the schedule will definitely test and prepare you for anyting you need to see in the postseason. Pratt has not lost since week five of last year to Hoisington (32-14) and is on a 11-game winning streak. Last year out of the CKL Hesston earned state runner-up in 3A and obviously the Greenbacks were the 4A-II champ, with Hoisington a heavy contender who lost to Hesston. Maybe they weren't the favorite to repeat this year but any time you have a Travis Theis on your team, it makes you a contender. We caught up with him below in the latest edition of Faces in KS.

This feature is presented by Home Lumber in Pratt. Proud supporter of the Pratt Greenbacks! Best of luck to all of the teams at Pratt this season! Visit Home Lumber online here.

My older brother (class of 16) started playing football in 3rd grade and ever since then I’ve been around it and been playing.

It’s a great way to stay fit and compete with people in maybe different positions, different stances and playstyles.

What do you plan to do at the next level, how tough is the recruiting process from small town Kansas?

My plans after high school depend on who is willing to give me a chance to play and make a difference at the next level. It’s similar to being a smaller guy in size on the field. Bigger colleges don’t pay attention very much to smaller schools, especially in Kansas. You have to throw yourself out there and make sure everybody is gonna hear you, make yourself known.

What makes Pratt such a special sports town?

There’s Greenbacks everywhere you turn and go. Just talking about friday nights. “Once A Greenback Always A Greenback”.

What was it like to win a state title coming out of nowhere last year?

Many people were surprised and thought we did come out of nowhere last year but this isn’t true.

Coming into the season unranked is a great feeling for all of us. Our team loves to be the underdog and we’re all up for the challenge.

What position do you plan on playing at the next level, is baseball a consideration for you?

I feel i could play any position in a flexbone offense including quarterback. Baseball is in the picture for sure, I’ve gotten baseball looks and opportunities but still have none for football.

How has the weight room really changed your game?

Weight room is the game! Strength is very helpful in football and is a huge advantage but 90 percent of football is the mental game.

What is it like to have all the hype surrounding you going into 2017 as an individual and as a team?

It’s nothing but a thing. There really isn’t very much hype on Pratt at all this year. We are the underdogs and we love it.

What is it like to play for coach Cruce?

I wouldn’t want to play for anyone else. The guy is unbelievable and devotes countless hours into our program. He is a great father, teacher, and coach from every aspect. You can tell everyday he cares about each and every one of us.

Who will be teams to watch this season and in your league?

If I were you I would definitely watch out for PRATT. The CKL is good just like every other year. You can expect big things from Nickerson and Smoky Valley.

There are too many to name. Everybody has a role on our team and does it well. You will hear many new names throughout the year from this Pratt team.

What did you do this offseason to get better?

Best place to eat in Pratt or surrounding area?

Not sure, Taking everything one day at a time.