Karee Dinkel of Hays High is 4-0 to start the 2017 season. (Photo: Stacie Zimmerman) 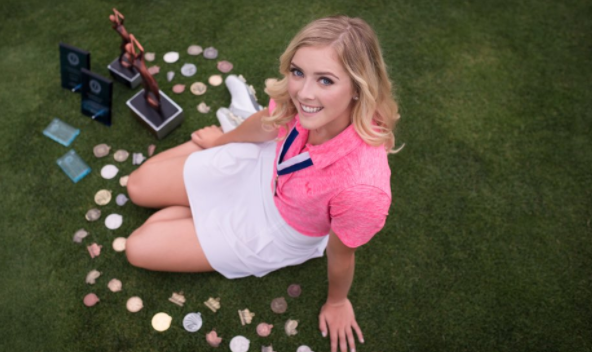 The Nex-Tech Wireless athlete of the month, chosen by Sports in Kansas, for their performance over the month of August is Hays High School senior Karee Dinkel. High school are slow in the month of August with only golf, volleyball and cross country going on over the first week in our Western Kansas territories, but Dinkel hasn't been slow on the golf course as she has been outstanding for the Lady Indians in 2017.

Dinkel has started out the season 4-0 in 2017 with a new nine hole school record. She placed first in the Hays High Invite shooting a 39 (+2) in her first meet of the year. That was followed up by shooting a one under 34 for first place for a new Hays High school record for nine holes at the Salina Central Invitational. She then shot 74(+1) at Dodge City to get first place and shot a 75(+3) at Garden City for another first place finish.

Dinkel is undecided if she will play collegiately next year and her primary focus is on the 2017 high school golf season. Last season Dinkel played at TMP in 3A before transferring to Hays where she took second in the state with a 87 at the 2016 3A State Golf Tournament. She won the state title in 3A as a sophomore in 3A shooting an 85. She took 19th as a freshman for TMP in 2014, the same year her current team last won a 4A state golf title.