v Putz of Miege sets state record in win over Aquinas - Sports in Kansas 
Warning: include(../includes/bodytag.php): failed to open stream: No such file or directory in /home/kansass/public_html/ks/news/index.php on line 36

Putz of Miege sets state record in win over Aquinas

Carter Putz of Miege, pictured with OC Justin Hoover, is into the record books. (submitted photo) 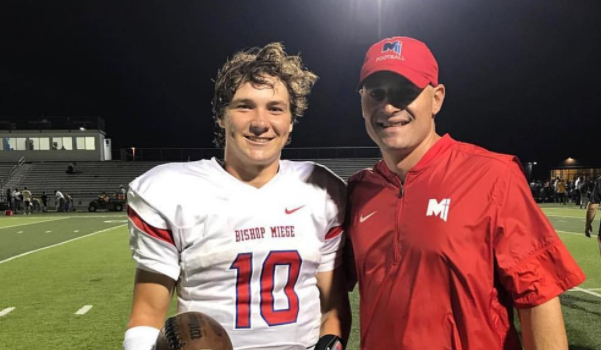 Bishop Miege senior quarterback Carter Putz now has his name in the Kansas Sports Hall of Fame record book after his third quarter 98-yard touchdown pass to sophomore Daniel Jackson on Friday against St. Thomas Aquinas to give him his 93rd career touchdown pass.

Putz entered the game with 92-career touchdowns tied with Silver Lake's Shannon Kruger, yes relation to Oklahoma head basketball coach and Silver Lake/Kansas State legend Lon Kruger, who threw 92 from 1994-1997 as a four-year starter. Putz has been a three year starter for the Stags and will have plenty of room this season to extend the record. Kruger went on to become an All-MIAA basketball player at Washburn while Putz is a Notre Dame baseball commit.

On Friday, Putz threw for 230 yards and a touchdown, in the 27-14 victory over 5A power and nearby rival St. Thomas Aquinas. It marked the sixth time in a row that the Stags and head coach Jon Holmes had beaten STA. Putz, known for his arm, also had two rushing touchdowns on the ground.

"It was a great accomplishment for Carter. It has not been easy for him with the pressure to get the record. He has done a tremendous job leading leading our team and putting us in a position to win games." Holmes said.

Putz, who was just featured by Sean Boston of Sports in Kansas on Friday in the latest Faces in Kansas, is also on track to break the Kansas all-time passing mark for yardage in a career this season. Putz has 7,175 yards in his career and would need 1,727 yards to break Will Schneiders (SM North, 2013-2016) mark of 8,901. Schneider, like Kruger and unlike Putz, was also a four year starter.

Putz threw over a third of his touchdowns to the graduated Jafar Armstrong, now a freshman at Notre Dame, who caught 36 of those over 2015 and 2016. Armstrong had 3,744 career receiving yards for Miege with 45 touchdowns, nine of those coming from Ryan Willis in 2014, now red-shirting at Virginia Tech after transferring from Kansas. 20 more of the passing touchdowns from Putz went to the graduated Landry Weber, now a walk-on at Kansas State, who had 1,160 yards and 20 receiving touchdowns last season.

Miege is no stranger to the Quarterback position going to the Division I level, however that won't be Putz. As mentioned earlier, he is headed to play infield for the Notre Dame baseball team, where he has been committed since his sophomore year. Willis as we mentioned above at Virginia Tech was the QB in 2013 and 2014, before that it was Montell Cozart, now at Boise State after transferring from Kansas. Before that it was Max Shortell, who was once the starter at Minnesota, before finishing his career at Jacksonville State. A big reason for the success of the QB at Miege has been Elite 11 QB Instructor and current Stag Offensive Coordinator, Justin Hoover. Hoover also works with some of the best quarterbacks in the region as he runs SpinIt QB Academy.

"Obviously just really proud of him. A huge accomplishment and I think he would be the first to tell you it's never about chasing a record. He just wants to help his team win each week." Hoover said.

Bishop Miege is the #1 team in the Rack Performance/Sports in Kansas Super 25 Poll and #1 team in the 4A-I Kpreps Poll. They will be back in action against BV North, maybe the best 1-2 team in the state with losses to Aquinas and Blue Valley. Putz will get to match-up with fellow Miege back-up quarterback Graham Mertz, one of the top recruits in Kansas for 2019.

Miege, under Holmes, has been the most successful team in Kansas by record over the last five football seasons with a record of 49-4, including three straight 4A-I titles. 3A three-time defending champ Rossville is 53-5 in that same time period, but has suffered three losses this year.