v Labette Bank Athlete(s) of the Month: Galena Football - Sports in Kansas 
Warning: include(../includes/bodytag.php): failed to open stream: No such file or directory in /home/kansass/public_html/ks/news/index.php on line 36 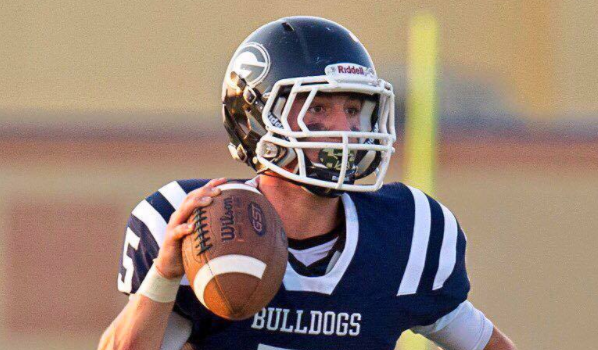 The month of August is slow for high school sports action but Galena was the only team in the Southeast Kansas area that got a win over the month in football with their 16-0 shutout victory over Colgan on August 31st to open up the 2017 season. However, even if they had other compeition to go against the Bulldogs have been one of the most impressive teams in 3A Kansas so far in 2017. So even though normally we give it to an individual in the Southeast Kansas area, this month Galena gets the nod as a team as several individuals shined for the Bulldogs over the first two weeks of the season. They also picked up a win on Friday with their 28-21 victory over Frontenac.

A big reason for the Colgan win was the play of wide reciever Garrett Hall who had over 100 yards recieving and Joseph Helton who had over 150 yards rushing in the shutout win. The Galena defense limited Colgan to just 151 yards of offense. J.C. Shelton, in his first year as a starting quarterback, has also been big for the Bulldogs 2-0 start in 2017 with his arm and legs. It's not just Joseph Helton that has stepped up either, brother, Michael, has also been huge for Galena in 2017. In the win over Frontenac Shelton had two rushing touchdowns while each Helton brother had a rushing score. Michael also picked off a Frontenac pass to give the Bulldogs a 28-21 win after Frontenac made a comeback after being down 28-7. Galena, led by all-state lineman Trevor Little, has used a solid offensive and defensive front to pave their way to an undefeated record and one of the emerging 3A teams to watch this season.

The Bulldogs, led by head coach Beau Sarwinski were recieving votes in this weeks 3A Kpreps Poll, and will be back in action on Friday against nearby rival Baxter Springs (1-1). 3A is one of the deepest classifications in Kansas with 33 of the 64 teams last season having a record of .500 or better. 32 teams make the 3A playoffs from 16 four-team districts in Kansas, which are separated with 32 teams on the East and 32 teams on the West.

Labette Bank would like to congratulate the Bulldogs on an impressive start in 2017!