v Faces in KS: Trey Gilbert - Sports in Kansas 
Warning: include(../includes/bodytag.php): failed to open stream: No such file or directory in /home/kansass/public_html/ks/news/index.php on line 36

Trey Gilbert of Holcomb will be a player to watch again this season in Western Kansas. 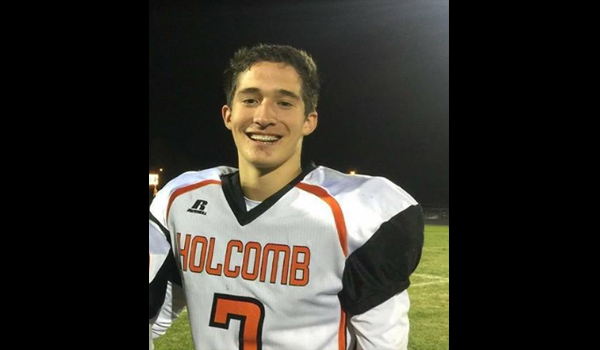 Trey Gilbert will have a lot of memories when he gets older and looks back on playing days at Holcomb High School. During Gilbert’s three years so far, the Longhorns have been a dominant success in class 4A-II. Gilbert competes in football and basketball for the Longhorns and has been a major key to the recent success.

The Longhorns football team lost in the 4A-II semifinals to eventual champion, Andale, in Gilbert’s freshman year. The team then won a state title in 2015, followed by a run to the semifinals in 2016 as well. Holcomb has two state titles on the hardwood during Gilbert’s time in high school and an overall record of 62-5 in the three seasons.

As a freshman Gilbert was the backup quarterback on the Longhorns team to all-state selection, Trey Teeter, who is now the assistant coach at Halstead High School. Gilbert saw some time in varsity games, but didn’t get too much time. Sophomore year came around and Gilbert had the same role, but got a little more action under center. The Longhorns went on to win the 4A-II state title during Gilbert’s sophomore season, a year after losing in the state semifinals.

Two years went by and Gilbert finally had his chance to prove what he was capable of doing. Gilbert shined in his junior campaign, as he helped guide the Longhorns to an impressive 10-2 season and a loss in the 4A-II semifinals to eventual champion, Pratt.

After attempting just 16 passes in his first two seasons as the backup, Gilbert threw 207 passes in his junior season. Gilbert completed 111 of them for 1,888 yards and 24 touchdowns, while throwing just eight interceptions. The wait was finally over and Gilbert proved that he was capable of being the go-to player under center for coach Kent Teeter. Gilbert was also a threat with his legs, rushing for 487 yards and 2 touchdowns.

The 6-foot-2 165-pound point guard product was also a big contributor to the Longhorns success this past basketball season. Gilbert averaged just over 10 points per contest for a team that won the 4A-II state title and had a 24-1 record to take with them. Gilbert scored in double figures in 14 of the Longhorns’ games this past season and posted a season-high 24 in an overtime win over Purcell (Okla.).

Whether you see him on the football field or the basketball court, you can bet that Trey Gilbert is at one of the two putting in the extra work to pursue his dreams of playing beyond high school. At this point in time Gilbert plans to play college basketball, but is still undecided.

This feature is presented by The Good Sport, Inc. in Garden City and Ron's Market in Holcomb. Proud to support Trey Gilbert and Holcomb Longhorn Athletics in 2017-2018. Also special thanks to American Implement of Garden City for powering all updates in Western Kansas this season with Sports in Kansas, a proud supporter of the Holcomb Longhorns.

Q: Your junior season ended with a heartbreaking loss to eventual state champ, Pratt in the 4A-II state semifinals. What did you and the team take away from that game?

A: We learned that we need to bring it every week and be better prepared for every team.

Q: What're your expectations going into this year's season?

A: We expect to finish what we left off from last season. The seniors and I want to finish on top.

Q: The small town of Holcomb has had a lot of athletic success over the past few years. How does it feel to be apart of such a successful program?

A: It's a blessing. I've always admired how hard the classes above me worked to get better and I hope I can carry that tradition on to the classes below me.

Q: How has your summer been? Have you went to any camps or combines?

A: Our summer has been great! We are having guys stepping up to positions they've never played before. As a team, we went to Fort Hays University football camp in early June. 5. It's still a process. But I am planning on playing basketball in college.

Q: Who are some of the other names to watch out for this year on the Holcomb roster?

A: Some names to watch out for this year would be Chance Rodriguez, Kaden Tichenor, Reece Morss, and Carter Blackburn. I believe that the team this year will be like last year, where someone new will have a breakout game.

Q: Have you always been a QB? Do you play defense too?

A: I've always been a QB. It's always been a dream of mine to lead my teammates on the football field. Unfortunately, I do not play defense.

Q: Have you always lived in Holcomb? What is there to do there?

A: I moved to Holcomb from Garden City my 4th grade year. There isn't much to do here honestly. If we wanted to do anything, we would just drive 5 miles to Garden City.

A: Very interesting. He's always has unique plays and has a great style of playing the game that suits me well. His coaching makes football fun and exciting.

A: I used to be a big Philadelphia Eagles fan, like my brother, so I was a big Michael Vick fan growing up. The way we could scramble out the pocket and still make a great throw down the field was something I admire.

Q: Have you worked on anything in particular this off season to get better?

A: I've been hitting the weight room hard. I'm trying to improve my strength and agility to help my team be better this year.

Q: Do you have a favorite NFL player? Team?

A: As I said earlier my favorite team would still have to be the Eagles. But I actually don't have a favorite player in the NFL now.

A: I hope to see myself with my beautiful wife, living in my dream house where I could start my family.

A: I am a conspiracy theorist. I believe in Aliens, Bigfoot, and all that controversial things. It's always fun for me to argue my open-minded opinions to my friends.

A: I always pray and visualize before games. That's something my mom taught me growing up.