v Faces in KS: Cameron Young - Sports in Kansas 
Warning: include(../includes/bodytag.php): failed to open stream: No such file or directory in /home/kansass/public_html/ks/news/index.php on line 36

Cameron Young (1) of Mill Valley had over 1,500 yards rushing as a soph last fall.(Mill Valley News) 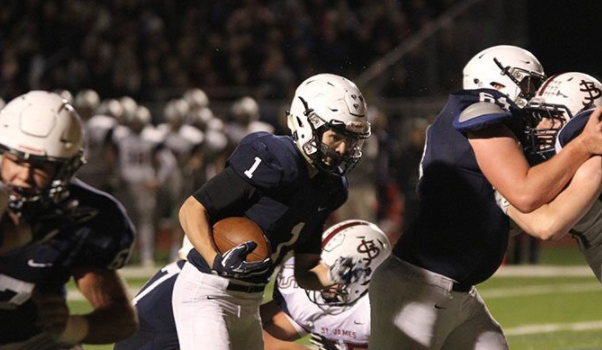 Cameron Young has had a pretty successful start to his high school football career at Mill Valley. The Jaguars have won back-to-back 5A state titles and will go for their third this coming season and will have a strong core of last year’s state title team returning.

The offensive game starts with quarterback, Brody Flaming. Flaming had a standout junior season for the Jaguars with 2,700 passing yards and 33 touchdowns to go along with 1,297 yards rushing and 6 rushing scores. When Flaming doesn’t have the ball, he’ll go to the man behind him, Young. Young a junior-to-be rushed for 1,546 yards during his sophomore campaign and 13 touchdowns on the way to earning first team All-5A honors as a running back. Young was one of the top sophomores in all of Kansas last fall and did it in the best league in Kansas, the EKL. Young and Flaming led the offensive attack and provided 90 percent of the total rushing game for the Jaguars last season, so you could say that they’ll have a good shot at the three-peat.

Young camped at North Dakota State this summer and really liked what he saw up in Fargo. Expect Young to possibly pick up some offers very soon, but there is plently of time as he still has two years of high school football to go and has a very bright future ahead of him. He isn't the biggest guy at 5-foot-10 and 180 pounds but he has exceptional speed in the 4.47-4.55 range and has a vertical jump of 38 inches. He also bench pressed 265 pounds as a sophomore last fall. All of the numbers at the time last year were well off the chart for a sophomore in high school well under 200 pounds.

Young feels that the Jaguars have a good shot at going for the three-peat for many reasons. One of those reasons is the strength of schedule that they have with competing in the Eastern Kansas League. Mill Valley began the year 3-0 before dropping four straight to EKL teams, Blue Valley, Aquinas, Miege and Blue Valley North. The Jaguars then reeled off six consecutive victories en route to the 5A state title win over Goddard in one of the craziest games of the 2016 season.

The Jaguars defeated Goddard in the state title game in Pittsburg, 35-34 in double overtime. Mill Valley’s defense forced four Lion turnovers, but one stood out more than the other three. Goddard was inches away from coming away with the championship in overtime, but a forced fumble by Dylan Smith at the goalline was recovered by Jack Eber in the endzone for the Jaguars.

Mill Valley’s quest for a three-peat will begin on September 1, as the Jaguars will play host to St. James. We do know that Mill Valley will be tested playing in the states best league with several state championship contenders across three classifications (4A-I, 5A and 6A). Last season the EKL brought home two state titles (Mill Valley - 5A, Miege - 4A-I), while Blue Valley took second in 6A.

Q: You're one of the top running backs in the entire state, how does that feel?
A: I just try to do my best every time I touch the field and luckily I have had a really good O-line thanks to Coach Pollard. I am always trying to improve my game.

Q: You've played two years of high school football and have two state championship rings to show for it, how cool is that?
A: I always feel blessed to already have two state titles under my belt already. It was something I dreamed about as a kid growing up playing football.

Q: What's it like playing for coach Applebee?
A: I feel really lucky to have a coach like Applebee he is great coach to have he pushes everyday to better yourself, he also really cares about you on and off the field.

Q: What're your expectations for this years team?
A: The expectation of my team will never change we want to 3 peat.

Q: How has your summer been? Did you participate in any camps?
A: I have had great summer thanks to our football weight program also along with some other training and I feel stronger, faster, and more explosive than ever, I couldn't be more excited. NDSU is one camp that I attended and really enjoyed meeting the coach staff and touring around the school facilities.

Q: What will it take to three-peat in 5A?

A: I think for us to have a good shot of a 3 peat it will come down to us as a team coming out to play and compete every week. We play in the hardest league in Kansas and you can never come out laid back because every team is so loaded in the EKL.

Q: You and Brody Flaming were the leading rushers for the Jaguars last year and you're both back this year, how nice will that be? Especially with him at QB again.
A: It's really great have Brody back this year he is a great competitor and is one of the hardest working people I know. He makes great decisions and when we get in a rhythm during a game we become deadly.

Q: You play in such a tough league, how does that help prepare you for the postseason?
A: I love our league it's like a fight every week and we really embrace that as a team and love the challenges  it brings week in and week out. I think it showed last season how crucial it is playing the schedule we do to prepare us for the playoffs.

Q: Your OC from the last two years is now at Olathe West, so will that be a big change for your offensive schemes?
A: Coach O' Neil was big part of our play calling last year and great coach and mentor for me but I believe nothing will change with our play calling from Coach Strack.

Q: Do you play any other sports?

A: Sophomore year I stuck to just football so I could help myself put on weight for the upcoming season.

Q: Who are some other players to watch on your team this year?
A: On offense we have Brody Flaming at QB. Evan Rice at WR who has great hands. Also Mitchell Grissom he is one of the most dominant lineman in KS.
On defense I would say Ike Valencia and Sage Sieprada are going to be key leaders.

Q: Is there any player you grew up watching that you admired?

A: Some players that I really admire are Walter Payton, Barry Sanders and Ezekiel Elliot. I love to watch these players highlights and see how they play their game so I can learn from them to improve my game.

Q: How long have you played football? RB?
A: I have been playing football since 4th grade since my mom wouldn't let me play my 3rd grade year because she thought I was going to get hurt. I have also been playing RB my entire football career.

Q: Do you train anywhere or how have you been able to be such a threat on the field?
A: Currently I have just been working out on my own and doing our summer weight program. My vision is probably my biggest threat on the field it allows me to see blocks and holes made by my O-line so I can make quick cuts to allow myself to get up the field.

A: My pregame routines consist of playing my music to the max so I can't hear my surroundings, also I have to get dressed and ready the exact same way every game.

Q: Where do you see yourself in 10 years?
A: In 10 years I see myself being very successful in the business world. I hope to have an exotic car collection before the time I'm 30.

A: Most people probably don't know I like to fish and be around nature when I have the time.