v Faces in KS: Brody Kooser - Sports in Kansas 
Warning: include(../includes/bodytag.php): failed to open stream: No such file or directory in /home/kansass/public_html/ks/news/index.php on line 36

Brody Kooser (1) will be among the states best for the 2017 season for Derby. (Jared Weinman) 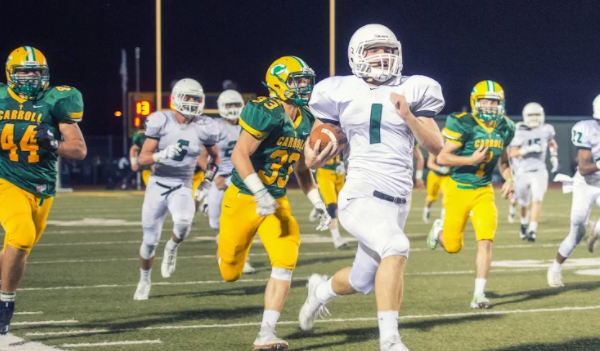 If you drive into the Derby city limits on any Friday night in the fall, you will more than likely not see very many people roaming the streets, because they’ve all made their way to Panther Stadium. Panther Stadium is located at 925 E. Madison Avenue in Derby and is home to the Derby Panthers football team.

Panther Stadium becomes a sanctuary on Friday’s in the fall when the Panthers are playing at home. The Derby faithful packs the stadium and people sitting in lawn chairs all around the stadium. It’s safe to say that the Derby community brings the crowds on Friday nights and the Panthers team gets the job done every Friday night. This fall, the Panthers will go for their third straight class 6A state title under coach Brandon Clark.

Brody Kooser began playing football 10 years ago and has loved the game ever since. Kooser, now a senior and starting running back for the Panthers was a huge part to the team’s success last season. Kooser finished his junior campaign with 220 carries for 1,681 yards and 31 rushing touchdowns for the Panthers. He also hauled in 9 catches for 212 yards and a score. He was a first team All Non-Senior from Sports in Kansas as well as an All-6A pick from several publications last fall.

For the Kooser family, it's also about carrying on the legacy of Derby football. Brody's younger brother, Braxton, was killed in a car accident as a freshman in 2013 and never got to experience playing varsity football at Derby. If you remember all the stickers on the helmets in the past years, that's what the BK was all about in the Derby community. We've since three state championships for the Panthers in 2013, 2015, and 2016 since the accident. The two, Brody and Braxton, were just 18 months apart. Brody has defnitely carried on the legacy of Derby football as he shined on the biggest stage a year ago in Kansas and has one season left to play. It's all about Derby for the Koosers as both of Brody's parents, Rob and Alana, are both graduates of the school. As well as younger brother, Brecken, is a sophomore member of the football team that plays defensive back.

The Panthers season ended the way that every school wants to and that’s with a state title. Derby’s second consecutive state title wasn’t an easy one, as they had to escape Blue Valley, 17-14. The game went down to the final seconds, literally, as Blayton Tullis drilled a 21-yard field goal with under 30 seconds to go to lift the Panthers on top of class 6A for back-to-back years.

Although the Panthers did graduate a lot from last year, including quarterback Dan Dawdy, the Panthers will have high expectations going into this fall. Coach Brandon Clark took some of his top players down to Frisco, Texas in July to compete in the National 7-on-7 Championships. The Panthers brought back a 4-5-1 record and had a lot of positives after competing against teams from Texas, Arkansas, Oklahoma and Louisiana.

Derby’s chance at a three-peat will begin on September 1st at Goddard Eisenhower.

This feature is presented by Johnson and Company CPA’s is a proud supporter of the Derby community including Derby sports and education. Visit us at www.johnsonandcocpa.com for all your tax and accounting needs

Q: What was it like being part of an undefeated team that won the 6A state title last year?

A: I’m extremely grateful to be apart of that team and be able to play with all of those great players.

Q: Take us through that game, as it was one of the craziest games in state title game history. What was it like playing in that game?

A: Blue Valley was a great team and it was a tough game. I’m happy to be able to playin that game and help my team win. It was most definitely the most nerve racking game I’ve ever played in.

Q: What’re your expectations for this years season?

A: My Expectations for this season is to win every game and nothing less.

Q: Your team went down to Texas a few weeks ago and played in the national 7-on-7 tournament. How cool was that?

A: It was extremely cool. I think it’s a great opportunity for us to be able to compete with those great teams.

Q: What will it take to win a third straight title in 6A?

A: We have a bunch of younger and new starters this year. Those players will have to step up and I think they will. Our seniors have to be leaders.

Q: You really had a great junior season and earned many awards. How have you improved your game since last fall?

A: Fixing the little things. Whether it be on the field, in the weight room or anything else.

Q: What’s your recruiting process looking like? Any offers?

Q: Have you always been a running back?

Q: When did you start playing football?

A: I’ve been playing football since 2nd grade.

Q: What is it like playing for coach Clark?

A: Coach Clark might get angry a lot, but he’s a great coach and I’m grateful to be playing for him.

Q: Do you play defense too? If so, what position?

A: Our team goes through the same routine each Friday, but personally, no.

Q: What is it like playing in front of such a great community on Friday nights?

A:  It’s a lot of fun. It also makes you very nervous playing in front of a big crowd. But very happy that the Derby community is such a big football community.

Q: What’s something most people don’t know about you?