v Sports in Kansas: 25 Tight Ends to Watch for 2017 - Sports in Kansas 
Warning: include(../includes/bodytag.php): failed to open stream: No such file or directory in /home/kansass/public_html/ks/news/index.php on line 36

Jackson Heath of BV Northwest has division one offers and is primed for a big season in 6A. 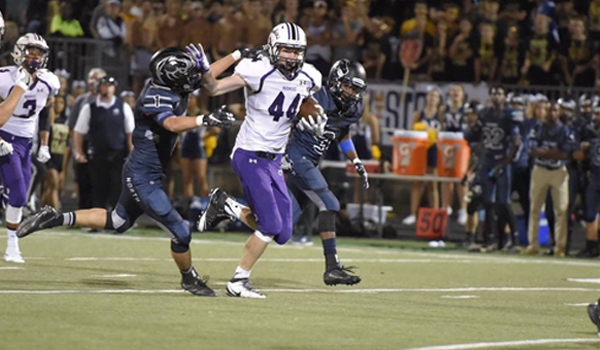 Sports in Kansas has compiled its list of 25 Tight Ends to Watch for the upcoming 2017 season. List is alphabetical by last name and is not a recruiting list. Every year Chet Kuplen and Ben Mitchum compile lists to project who the states top players will be at the beginning of the season which is based on last years performance/stats, input from coaches/media, and recruiting/video highlights. Special thanks to Rack Performance for powering this list.

Beason isn’t the biggest but he was one of the better TE’s in 5A last season for the 5A runner-up Lions. He earned first team All AVCTL-II honors as a junior last fall. He caught 28 passes for 456 yards for eight touchdowns last season. With some stud lineman back and all-state Quarterback Blake Sullivan at it again, Goddard could have another very nice season in 5A.

Boyd could develop into a nice prospect for 2019 with his size. He showed some playmaking ability on both blocking and catching the football a year ago for the Cowboys as a sophomore.

Borth is a nice run-blocker, basically an extra offensive lineman for the Bulldogs. He doubles as a stud on the defensive side of the ball where he was one of the better defensive lineman in the Frontier League a year ago. The 6’3 long-arm prospect may figure in better at DE at the next level but is an exceptional blocker whether he is playing tight end or tackle.

Cason helped pave the way blocking for Jovon Baldwin and Ryan Henington a year ago and will be relied on heavily again in 2017. He has nice size and shows the ability to also be a threat in catching the football. We were really impressed with how Cason finished blocks and gets to the next level sealing off defenders. Don’t be surprised if a school at the next level will make Cason an offensive lineman.

Clausing has the size college recruiters drool over, he also may be a transition offensive lineman at the next level. He is a project at the next level but look for a big season for him in 4A-I.

Clune will be relied upon heavily on the line to help pave the way for a loaded cast of backs for Aquinas this fall. Although Aquinas hasn’t won a title under Dreiling, they have made deep runs the past few seasons and this could be the year for the Saints. Clune plays in the best league in the state and was a second team All EKL selection a year ago at TE.

Cundiff was a first team All Non-Senior as a sophomore from Sports in Kansas last fall. Look for another big season and some recruiting interest to surround Cundiff this season. He currently holds an offer from KU.

Diggs has caught six touchdowns from his tight end position over the last two seasons and earned second team AVTCL III honors a year ago for the Bullpups. Last season he caught 17 passes for 196 yards, four of those going for TD.

Emery is known for being one of the states top recruits on defense but the coaching staff figures to use him some in an offensive role at times this season. If they do look out because he will be a weapon whether he is blocking or catching the football. He will double with Dylan Freberg to form one of the best combo tight end groups in Kansas.

Fairchild could emerge into a prospect for 2019 with his size. He also plays for one of the most consistent programs in Kansas and will have a chance to prove himself as one of the top playmakers in 2019 at tight end and defensive end over the next two seasons. Fairchild has the ability as a blocker and a receiver.

Fenderson could develop into a prospect this fall for the Aces. He shows the ability to be a nice blocker and has the athletic ability to be a threat in the receiving game.

Freberg had a breakout year as a junior in 2016 with 35 catches for 356 yards and four touchdowns. Look for a big year for Freeberg with the addition of Graham Mertz at QB, a Miege transfer with a KU offer, that will be a first year starter as a junior. We also listed teammate Miles Emery, who is perhaps the top DE in Kansas, will also look to be in on some different offensive situations at TE this year for BV North.

Ginavan will split out more as a receiver and is known more for defense but when used as a tight end he can be an efficient blocker and has a nice skill set. If he decides he wants to play football at the next level and adds strength, instead of baseball where he is also one of the top pitchers in 4A-II, he could see some FCS offers generate this fall at defensive end, where he is one of the top returnees in the state.

Griffin is a defensive end and tight end that should expect a breakout year for the Pioneers in 2017. He has the ability to be a nice blocker and receiver.

Hanika may be more known for high school basketball as a starter on the Hayden basketball team but features great size at the TE position for the 2016 4A-II state runner-up.

Heath has multiple division one offers and rarely comes off the field for the 6A Huskies. Expect that to be the same this year and expect brand new head coach Clint Rider to get him the ball often as Rider has been known to throw it around the yard with his past two teams (Hesston, SE-Cherokee). Heath also doubles as an outside linebacker and can play defensive end.

Hicks could end up being the top recruit in Kansas for 2019 on the defensive side of the football. He could play on offensive lines or even tight end if utilized on both sides of the ball this year for the Grizzlies who have had a lot of recent success under Steve Martin. Hicks is an absolute athlete and features a 32 inch vertical. He has several division one offers. Kamerion Wimbley, former NFL player and a first rounder out of Florida State in 2006, had similar size and explosiveness to Hicks when he was in high school at Northwest back in 2002. We could see Hicks ending up with 20 plus offers after this season.

Jackson is more of a receiver but is a hybrid type and can play both tight end/receiver. He had 15 catches for 339 yards with two touchdowns last fall.

Like Kenyon Tabor last year, Littleton is a hybrid and can play TE or WR. He makes the TE this list due to the fact he may project as a TE at the next level based on size. Littleton got it done for the 5A back-to-back champ last season with 567 receiving yards in a loaded cast of receivers for the Panthers in 2016. He will be the go-to-guy in 2017 for Derby as they look to win their fourth state title in five years.

McGinnie was an all-league pick a season ago and is one of the biggest tight ends in the state at 280 pounds. He also doubles as a defensive lineman. McGinnie is seeing D2 interest with an offer and could generate some FCS/FBS interest this season.

Parks is 6’5” and 230 pounds and has the size to play at the next level. He also has nice speed registering a 40 in the 4.8-4.9 range. He is a great blocker but may be an even better receiver over the middle. Northwest also splits Parks out in some situations and he’s a defenders nightmare with the size.

Showed his ability as a nice blocker and athletic pass catching tight end last season in the states best league. Although BV West struggled in the loaded EKL, Pascuzzi should be a bright spot for the program in 2018. He will need to get stronger at the next level but features nice 4.7-4.8 range speed at TE.

Waters is built like a receiver and that’s basically what he is but listed as a TE in the 8-man ranks. Waters had an all-state season last year as a sophomore where he caught nine touchdowns and had 920 receiving yards a season ago.

Webb is a division one prospect and more known for his defense but will be one of the top playmakers in 4A-I this season on both sides. Webb is a freak athlete as he has a shot put toss of 54-08, triple jumps over 44 feet and runs a 200 in 23.6. Expect Webb to blow up on the recruiting scene this season.