v Faces in KS: Jace Ruder - Sports in Kansas 
Warning: include(../includes/bodytag.php): failed to open stream: No such file or directory in /home/kansass/public_html/ks/news/index.php on line 36

Jace Ruder of Norton is not just a top QB in the nation, hes a multiple sport star for the Bluejays. 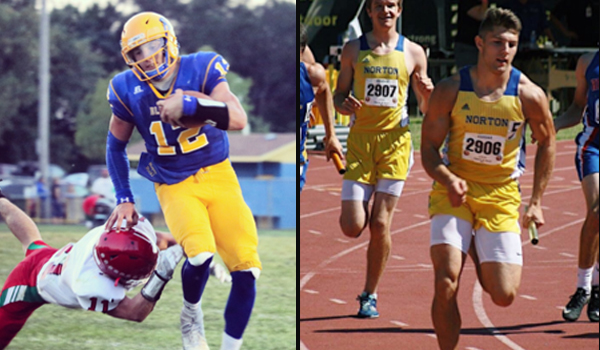 Located just 11 miles south of the Nebraska border in north central Kansas, the town of Norton is home to around 3,000 people and the number one football recruit in the state for the upcoming school year.

So how does a kid from a small Western Kansas town get the exposure of being a big-time football recruit across the nation with around 15 division one FBS offers from nearly every conference in the country? We will tell you below on some of the measurables of this special 2018 Norton product.

Jace Ruder, a 6-foot-3, 205-pound quarterback for the 3A powerhouse Bluejays has recently committed to the University of North Carolina after decommitting from the University of Tulsa in late May. Ruder is rated as the 14th best dual-threat quarterback in the nation by Rivals for the class of 2018 and the number one overall prospect by Rivals in the state of Kansas for 2018. Ruder is the highest ranked quarterback, based on recruiting services we've had in Kansas, by Rivals since Tyler Matthews of McPherson (2011) and Blake Bell of Bishop Carroll (2010). Bell, who played TE and QB at OU, is now in the NFL as a TE with the 49ers.

Ruder attended a camp in Chapel Hill in mid June and announced his commitment two days after his visit via Twitter. Ruder knew after he stepped foot on campus that wearing a Tar Heels jersey was the right fit for him. He looks forward to playing for coach Larry Fedora and his coaching staff, as well as playing in the ACC. The Tar Heels coaching staff was excited to grab the dual-threat 3-star quarterback.

Ruder began playing football at a young age and has gradually became better and better every year and it has shown in his days playing for Norton. He has traveled to camps all across the United States, which has proven to be a huge factor in his recruiting process. Ruder threw for 580 yards and 7 touchdowns in his freshman campaign, to 1,407 yards and 11 touchdowns in his sophomore season, followed by a 1,598 yards and 14 touchdowns in his junior outing. Ruder also is a threat with his legs, as he rushed for 746 yards and 16 touchdowns last season for a team that went 7-4.

Ruder has been recruited heavily over the past year or so and it really sparked lately after his decommitment from Tulsa. Ruder picked up offers from schools like Baylor, Florida State, Georgia, Indiana, Iowa, K-State, Ole Miss and Penn State to name a few. It’s safe to say that Ruder, a product from such a small town in Kansas has made a name for himself.

Not only does Ruder look the part and looks like he lives in a weight room, he gets it done in multiple sports. This past spring Ruder used his sub 4.5 speed to win a state title in the 3A 300m Hurdles at the KSHSAA State Track Meet in Wichita. Ruder hurdled his way to the gold medal in a time of 40.10. He also was all-state in the discus taking second and throws in the 150-165 range. How many high school quarterbacks do you know that can throw a discus that far? Our guess is not many and ones that are overly explosive. But Ruder didn’t just star on the football field or the track, he was also a big part of the Bluejays’ basketball success. He averaged 12.3 points and just over eight rebounds per contest in his junior year.

This year’s Bluejays team will be young, but Ruder feels like this team has a lot of talent and could turn some heads. Norton also features Tevin Petrie, who could also become a recruit to watch this season in Kansas and could contend for all-state honors. Ruder and the Bluejays will open up the 2017 season on September 1st at Goodland.
--

R & S Oilfield Service, Inc. and the whole Ruder Family are proud to support the Norton Bluejays and Jace Ruder.  Go Bluejays and the best of luck in 2017-18.

Also be sure to nominate the Nex-Tech Wireless Athlete of the Month for Western Kansas each and every month by emailing sportsinkansas@gmail.com

Q: You have recently committed to North Carolina, what made that your ultimate decision?

A: I committed to UNC because of how comfortable I was with the coaches and Chapel Hill. The coaching staff are great men of God and have great motives behind their coaching. Along with that, chapel hill has somewhat of a small town feel and the football program is perfect for what I want to do.

Q: You attended the UNC camp two days before committing to the Tar Heels, was that a big part of your commitment as well?

A: Yes, and no. Honestly once I set foot on campus I had a pretty strong feeling about North Carolina. Being able to throw to guys like Jordyn Adams and Dyami Brown is exciting and seeing how Coach Heckendorf coaches.

Q: Who were some of the other contenders in your recruiting process?

A: Some other contenders were Georgia, Baylor, Penn State, Indiana, Ole Miss, Flordia State, and some others. I never really had a "top" list.

Q: What does it mean for a guy like you from Norton, KS to have the opportunity to play in the ACC and in Chapel Hill?

A: Having the opportunity to play ball in the ACC for North Carolina being from a small town in Kansas is very exciting. Not many kids get the opportunity and it really just proves that God is great and hard work pays off.

A: Yes, rankings are fun and can make you feel good, but ultimately I could care less what I'm ranked. All that matters is getting the opportunity and outworking the guy next to you.

Q: You're not just a really good QB, but also a state champ in track. What does it mean to you to succeed in both sports?

A: Succeeding in multiple sports is a very positive thing for me as an athlete. It teaches me how to compete in other situations and use other athletic abilities.

Q: What made you open your recruiting process back up after committing to Tulsa?

A: I opened up the recruiting process simply because my goal is to play in the NFL and I believe that to be able to play at the highest level against the best of the best will help prepare me for that professional level.

Q: Norton went 7-4 last season and lost in the second round of the 3A playoffs, what will it take to make it farther this year?

A: It will take a surreal amount of hard work from the guys this year. We are very young coming in and it'll be a fun process.

Q: How do you feel about this year's team?

A: Like I said earlier we are very young this year, but having young guys means a strong desire to get better so we will definitely be grinding.

A: It's a lot of fun playing for coach Melvin. He's a man of God and makes sure he's teaching us more than just the game of football.

Q: Have you always lived in Norton?

A: I've got great family here in Norton and have always lived here.

Q: Who are some other players to watch on the Bluejays team?

A: We've got a lot of hard working guys on the team who have been putting numerous hours in during the offseason and I think everyone will be able to see that once we start playing.

Q: What have you been working on specifically in the off season to become a better player overall?

A: This offseason I've really been working on mastering my throw and increasing all areas of my gameplay. Continuing to create that mindset that can keep it even keel and then hit a switch instantly and turn it on.

A: I've been playing QB my entire career starting in 4th grade. So all in all this will be my ninth year.

Q: Is there any QB past or present that you've always looked up to and wanted to model your game after?

A: I really enjoy studying Aaron Rodgers and Tom Brady's film because their gameplay is different than mine. I can incorporate parts of their gameplay into mine to expand my skill set.

A: My favorite NFL team is the Dallas Cowboys and favorite player is Aaron Rodgers

A: My pregame routines consist of staying focused at the task at hand and eliminate any distractions to begin to build up that fire prior to kickoff.

Q: What is there to do in Norton?

A: Norton is a town of approximately 3000 so Even though it's a small Community, it's very supportive of the schools and their activities. As far as things to do, we have a great golf course that I love to play, we have a lake right outside of town, and we have some of the best hunting in the state . Our family likes to hunt and I don't have much time anymore but my dad is big into bow hunting. Our town is always having community events that promotes a lot of pride in our town.

A: In ten years I see myself with a family while living out my dream of playing in the league.

Q: One thing that most people don't know about you?

A: One thing that most don't know about me is that I'm pretty musical being able to play the guitar, piano, drums, and somewhat sing.