v Faces in KS: Hayden Gillum - Sports in Kansas 
Warning: include(../includes/bodytag.php): failed to open stream: No such file or directory in /home/kansass/public_html/ks/news/index.php on line 36

Hayden Gillum of Plainville is one of the top small school returnees in Kansas for 2017 season. 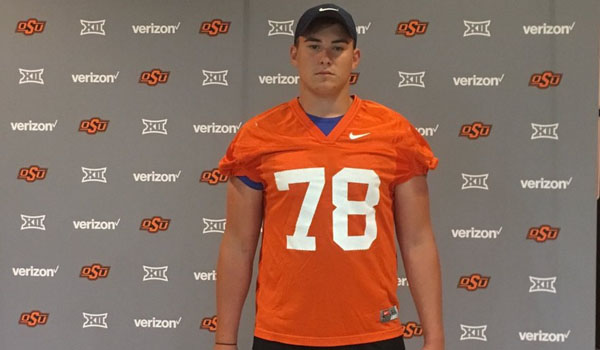 The Plainville Cardinals hopes of winning a 2-1A state championship came up just short in a 28-24 loss to Troy last fall, but the Cardinals are confident of a return trip to Hays. Plainville’s leading tackler from a year ago, Hayden Gillum, will return and has high expectations going into the upcoming season.

Gillum, a 6-foot-3 245 pound defensive end and middle linebacker is a force of havoc for any opposing team across the line of scrimmage. Gillum has shined in the offseason and had an extremely impressive outing at the Sharp Performance Combine in Salina in May. The combine was impressive enough for a lot of collegiate coaches to attend and that is where Gillum picked up his first offer from Butler CC. Gillum has added nearly 30 pounds to his frame from this time last year and with added work in the weight room could land an offer from from the Division I (FBC or FBS) level this fall.

Gillum hopes that he will build on more than just the Butler offer after attending many more camps and combines over the summer months. With Gillum’s frame and agility he looks to be one of the top defensive players in the state this coming August.

Like most high school kids Gillum’s summer months will be pretty jampacked. Gillum also is a member of the Cardinals basketball team and will be playing basketball, as well as attending football camps and combines.

The Cardinals went 11-2 last season with losses to 3A power Phillipsburg (11-1) and 2-1A state champion Troy (13-0). Gillum finished the season with a team-high 97 tackles with 63 of them coming solo. Gillum had 14.5 tackles for loss, as well as four sacks and one interception. Jared Casey, a sophomore for the Cardinals had a stellar freshman campaign with 96 tackles, two sacks, two interceptions and three forced fumbles from his linebacker position.

Gillum isn't the first one in his family with success either as his brother Hadley, a former Faces in KS featured athlete a few years back, was a first team all-state basketball player for Sports in Kansas and went on to play at Fort Hays State University.

Look for the Cardinals to make another deep run in the 2017 season with a lot of talent returning. We caught up with Hayden below.

Special thanks to Plainville Livestock for powering 2-1A features with Sports in Kansas.

Q: Your team made it to the state championship game this past fall, what was that feeling like?

A: It was absolutely amazing, after all the work we put in as a team to finally reach our ultimate goal was extremely satisfying.

Q: What will it take to get back to that title game in November?

A: It all starts with the fundamentals and little things that coach helps us with day in and day out, and of course hardwork in practice and the weight room through out the summer!

Q: What do you do in the offseason to get prepared for the upcoming season?

A: I work a lot on just getting my body in shape for the upcoming season, and working on new techniques to put into use during the football season.

Q: How long have you played football?

A: I started playing football in the 5th grade, this was my 7 year playing.

Q: Is there one or two OL in college or the NFL that you look up to and try to learn from? Any middle linebacker (MLB) as well?

A: I really like Luke Keuchly's play style at LB and his hustle on the field, he's a very aggressive player and I like that. I also look up to J.J watt at DE and his work ethic, I admire he was from a some what small town and that relates with me.

Q: When did you start playing on the OL? MLB?

A: I started playing OL in the 7th grade along with MLB

Q: You're also a big threat at MLB too, what makes you so dominant?

A: I really try to be the most physical/aggressive player on the field and I feel that gives me an advantage, I also put a lot of time into film, and studying tendencies and what teams like to do.

Q: What is it like playing for coach Stephenson?

A: Playing for Coach Stephenson is great, he's a really big role model to me and a great guy, he will help with anything whether it's on the field or off the field. I really look up to him!

Q: Have you always lived in Plainville? What is it like being a Cardinal?

A: I have not always lived in Plainville, my family moved here when I was in first grade , I love being a cardinal, the amount of support from the community is amazing, a lot of games we brought a bigger crowd then the home team, the community supports us a ton and I am very thankful for that.

Q: You picked up a offer from Butler at the Sharp Combine, that had to have felt good. How do you feel you performed there?

A: Yeah, that was exciting! I thought I did well! For the first combine of the year, I got some good marks set and now I have something to build off of!

Q: What is your offseason like? Do you participate in any other sports?

A: My off season is usually pretty busy, I play basketball also, during the summer I will be attending a good amount of football camps, and also doing summer weights.

A: I don't have to many set routines for pregame, I always eat a big meal the night before. I also always have a blue Powerade right before the game.

Q: What are your goals for the upcoming season?

A: I have high expectations for this upcoming season and ultimately I want to be back in Hays KS playing for the state championship again.

Q: Who are some other key players on the Cardinals roster?

A: There are so many key players on our team it's hard to choose a few, our team would not be what it is without each and every player on our team. From our freshman up to our seniors!

Q: Name some things to do in Plainville

A: In the small town of Plainville there isn't much to do so we have to make our own fun, whether that's just driving around with friends or a pickup game in basketball, or just tossing the football around!

Q: What offers do you currently have? When do you hope to commit?

A: Right now I have an offer from Butler, The summer is looking pretty bright, I have a good amount of FBS/FCS looks, after attending some camps and visiting places this summer I will see how things turn out with what offers are on the table. I have a few schools at the top of my list right now, I would like to commit after this football season!

Q: What is one thing that a normal person wouldn't know about you?

A: I love the outdoors and being around family and friends