v Faces in KS: Jarret Dotson - Sports in Kansas 
Warning: include(../includes/bodytag.php): failed to open stream: No such file or directory in /home/kansass/public_html/ks/news/index.php on line 36

Jarret Dotson of Baxter is 26-3 on the mound over his career. (photo: Michael Rodgers Photography) 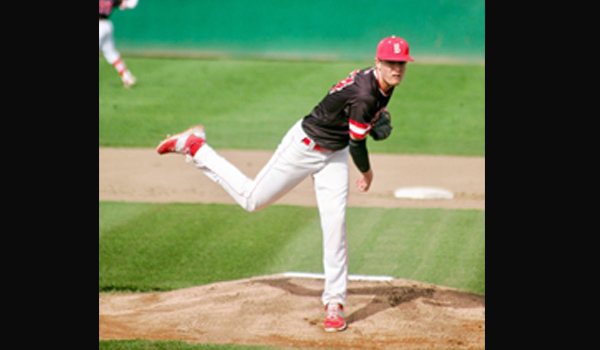 When it comes to high school baseball careers in the state of Kansas, there are only a few that have had the success that Jarret Dotson of Baxter Springs has had over the last four years on the mound.

Dotson, a 6-foot-2, 170-pound, senior, right handed pitcher, that has signed with Pittsburg State, has been an all-state caliber player since he entered his freshman year at Baxter Springs throwing in the mid-to-high 80s. He has put together a 26-3 career mark on the mound, only second in wins this year among all active players in all of Kansas (Conner VanCleave, Holcomb, 32-5 - also a state record). His three losses, one came in his first start ever as a freshman, and two have came this year, one to four-time defending 2-1A champion, Colgan and one to Ketcham (OK), who made the state tourney in Oklahoma. Dotson also features a 1.50 ERA and has maxed out as high as 90-MPH fast ball in his career, but has been consistent over the last two seasons at 85-88. He was named the 2016 4A-II Player of the Year from Sports in Kansas and the 2016 4A-II Pitcher of the Year from the Kansas Association of Baseball Coaches last year as he helped lead the Lions to the 4A-II title a year ago.

It also helps Dotson plays for one of the most known baseball towns in Kansas that have produced multiple division one baseball players and some minor leaguers over the years. Baxter, located in the southeast corner of the state plays in the very competitive CNC League, who has 20 state titles from five different league high schools since 2001. Although he may not have the perfect record of Baxter's David Johnson (20-0, 1990-1993 - state record most wins/no losses) who went on to play at Kansas State and minor leagues for the Rockies, Dotson's name will join the likes of several Baxter stars over the years. His 26 wins aret tied second all-time with Drew Hartley (1995-1998), a former division one player at Arkansas Little Rock from Baxter, who went 26-4 over his career. But it wont be reachable to get the 29 wins that are a Baxter record and were once state record by Jeff Karnes with 29. Baxter Springs isn't just known for its individual talent either as it has state baseball titles in 1985, 1991, 1992, 2002, 2003, 2006, 2007, and last years 2016 team. It all stems from youth and little leagues in Baxter that have made a lot of noise at the state and national level over the years. In fact, Dotson's 14-year old team made the Little League World Series in August of 2013 with his father, Shane, as the head coach. Six of those players are on this years squad including Dotson, Karnes, Noah Wilson, Austin Williams, Drake Shaw and Nate Thompson. Less than 9-months after that Dotson was pitching his team to a regional title as a freshman, in fact he is one of the only players in Kansas history to win four regionals on the mound as a pitcher.

"It's every baseball players dream to play for a team like Baxter that have had the success they have had. I moved to Baxter in the first grade from Alabama. I've loved the past 12 years of school here and have made lifelong friends." Dotson said.

It's not only Dotson that is an all-state/player of the year caliber player on this Lions team either. His teammate Kaid Karnes, a Cowley County signee, has been nearly as impressive over his career. Karnes, a lefty who throws in the mid 80s, has well over 200 strikeouts in his career. Karnes had 87 strikeouts last season in 51.1 innings pitched. They form one of the better pitching duos in the entire state of Kansas.

"Kaid is a great teammate because he pushes me to be my best and I can do the same for him." Dotson said.

For now the focus is on the 4A-II state tournament as the Lions look to repeat as the state champion. Last year the Lions won the 4A-II title with a 13-3 victory over traditional power BIshop Ward in the title game. Fifth seed Baxter Springs (16-4) will open up play with fourth seeded Concordia (14-3) in the 4. vs. 5. matchup in Emporia on Thursday at 1:15 pm. We caught up with the outstanding pitcher below in the latest Q&A edition of Faces in KS.

How did you get involved with baseball? Just started coach pitch when I was a little kid and loved it ever sense.

How has the season went so far? Good, started off a little slow but were coming to our strongest point at the right time.

What is it like go to Baxter have you went there your whole life? I moved to Baxter in first grade, from Birmingham, AL. And I've loved the past 12 years of schooling at Baxter. I’ve made lifelong friends

Whats it like to have another arm on your team that is an all-state arm like Kaid Karnes? It’s great because he's someone who pushes me to be the best i can and i do the same for him.

How is it to play for a tradition rich school in baseball and Coach Mercer? it’s every baseball players dream to play for a high school who has had the success Baxter has. and Coach Mercer is someone who is always hard on us, but its because he knows our potential and just wants the best for us. He does whatever it takes to win, so you have to respect that.

Why did you choose Pittsburg State, who was all in the mix of recruiting you? Pitt just felt like the best opportunity for me and my family and will set me up for success. And just a couple Juco’s, mainly Cowley and NEO. But Pitt just felt like home

How tough is the CNC league in baseball? It’s definitely a tough conference, especially when you're one of the top teams year in and out. Everyone wants to beat you, so they play to their best ability.

What was it like to win a state title last year and what will it take to repeat? It was one of the best feelings I've ever had. to know that your hard work finally paid off. And this year id say the key to repeating is swinging the bats like i know we can. we have the pitching to do it, and if we can get our bats hot then nobody can beat us

How has the pitch count affected you and your team? it hasn't helped, but we've managed to change and adapt to it and be successful so as long as the team gets the win, it doesn't matter who's on the mound

Where do you see yourself in 10 years? Hopefully still playing baseball. But if not I'm going to med school to be an opthomalogists.

Best baseball players you've played with and played against? i’ve played against Ian Anderson, who was a top 5 draft pick in the first round this year, he was definitely one of the best pitchers I've seen.

Who do you look up to? in baseball, Derek Jeter because he always played the game hard and clean. and in life, my dad because he's taught me that not every situation needs a reaction and to always work hard and not give up on your dreams

Who are other key players on your team? All 9 of us on the field, as long as we all hit then we will be good.

How tough does the 4A-II field look this year? We play Concordia first game and from the talk I've heard its supposed to be the game of the tournament. theres a lot of good teams but if we play to our capability nobody can beat us

You guys made a little league world series as 14 year olds, how many members of your team currently were on that and what was it like to have your dad as a coach? there are six of us on our high school team. Drake Shaw, Kaid Karnes, Noah Wilson, Austin Williams, Nate Thompson, and myself. It was good to have my dad as a coach because he was always there, and always pushed me to be the best I could

Favorite subject in school? US History

One thing the average person wouldnt know about you? I love adrenaline rushes