Austin Madl of Frontenac will look to win a 4A title this spring. (photo: Derek Livingston) 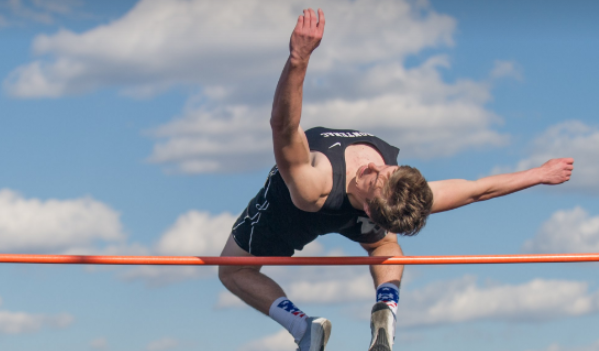 The Labette Bank Athlete of the Month, as selected by Sports in Kansas, for their performances over the month of April for the Southeast Kansas area is Frontenac High School senior, Austin Madl.

Madl, a senior high jumper who stands just 5-foot-10, broke the Frontenac school record in the high jump by going 6-foot-6 at the PSU Jocks Nitch Invitational earlier last month on April 14th in Pittsburg. Madl, who had previously went 6-foot-4, is one of the top high jumpers in Kansas this season. The Missouri Southern signee is ranked in a two-way tie for first in 4A this season with his 6'6" mark, tied with sophomore Marhall Faurot of Scott City. He is also tied for fifth in all classifications of Kansas. 6-foot-10 remains the top jump in Kansas this season by senior Tony Kinser of 3A Hugoton. Madl has seen tremendous improvment over the last two seasons, jumping 6-foot-0 as a sophomore and junior and is now one of the top jumpers in Kansas. Madl is not just a track and field athlete either, he was also an all-league running back for the Raiders CNC league championship football team this past fall. Madl also participates in the sprints and relays for the Raiders.

Labette Bank and Sports in Kansas would like to congratulate Austin on an outstanding senior season so far!