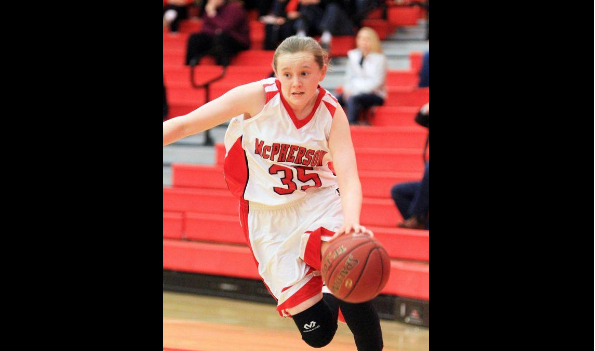 The Nex-Tech Wireless Central Kansas Athlete of the Month for their play over the month of March 2017 is McPherson High School junior Taylor Robertson.

Robertson, the 2017 Kansas Gatorade Player of the Year, helped lead the Lady Bullpups to the 2017 4A-I state title game in which they took second place, losing to Bishop Miege. Robertson has now been a three-time all-state selection for MHS from Sports in Kansas. She also earned the Junior Player of the Year from Sports in Kansas in 2016-2017. The 5-foot-7 guard averaged over 24 points a game this season, hitting 85 three pointers, while making nearly 60 percent from three-point field goals in 2016-2017. Robertson is also looking to become the all-time leading scorer in the history of the historical McPherson High School girls program and is well on her way with over 1,300 points already with one full season remaining. She is ranked as high as the #18 point guard for the Class of 2018 by ESPN.

Nex-Tech Wireless would like to congratulate Taylor and the McPherson girls basketballl team on an outstanding basketball season.