v Faces in KS: Tate Busse - Sports in Kansas 
Warning: include(../includes/bodytag.php): failed to open stream: No such file or directory in /home/kansass/public_html/ks/news/index.php on line 36

Tate Busse of St. Francis went over 1,000 points as a junior. 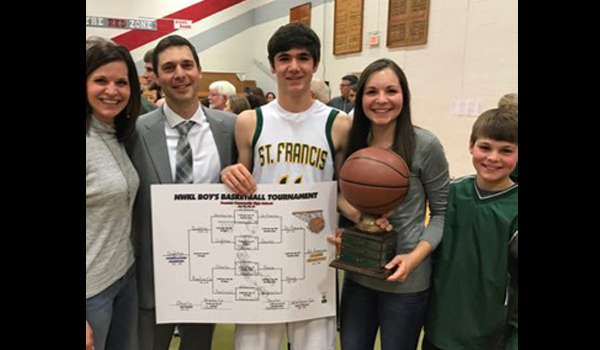 It is a rare feat and big accomplishment to get 1,000 career points in a high school basketball career, it is even more rare to get 1,000 career points as a junior. That is until you meet Tate Busse, a junior guard at St. Francis High School. St. Francis, Kansas, population 1,329, is located in the northwest corner of Kansas just a short drive away from the Nebraska and Colorado borders.

"Getting 1,000 points was really cool and I couldn't have done it without all of my teammates. It's something I never really thought i would get as a junior. It's an honor." Busse said.

Busse became just the fifth player in school history to go over the 1,000 career point milestone and is a huge reason the team is 18-2 and a team on the rise in 1A-I. The 6-foot-2 junior has made a state leading (all-classes) 70 three pointers this season, shooting 48 percent from behind the arc, which is also the fifth best % in Kansas. He is averaging 21 points per game with three boards, three steals, and four assists per contest. He has scored 420 points so far in 2016-2017. Busse, who has a career average of 16.5 points per game over the last three seasons, is a strong candidate to make every all-state list in Kansas this season for his classification (1A-I).

Saint Francis isn't just about Busse either, it's loaded with athletes in the high school. The football team, which Busse played receiver and defensive back, took second this year in 8M-I. Football studs like Taylor Rogers, Brock Waters and Quinton Cravens are all two-sport stars that are a huge part of the basketball team as well. Also add in Jeremiah Neitzel who is a big part of the defense for the Indians this season while Dalton Straub and Brady Dinkel have stepped up big off the bench.

"We really have some great teammates on our team. We all want to win and we have played together since we were little." Busse said.

The Indians (18-2), led by head coach Cory Busse, who is Tate's father, begin postseason play on Friday against La Crosse (9-12) in the 1A-I sub-state semifinals hosted by Quinter at 6 p.m. The winner gets the winner of Brewster/Triplains (12-6) or Quinter (8-12) in Saturday's sub-state championship with a 1A-I state berth on the line. Saint Francis has not been to the state tournament in 20 years, making their only appearance as a school back in 1997. They are currently ranked fourth in the final KBCA Boy's Basketball Poll in 1A-I.

We caught up with the outstanding junior below in the latest Faces in Kansas Q&A feature.

This feature is presented by American Implement of Wheeler, Kansas & Krien Pharmacy, proud supporters of the St. Francis Indians. Best of luck at sub-state.

Basketball is just something that I have always loved and have been around since as early as preschool . I think the biggest way I got involved was when my Grandpa, Ward Cassidy was the basketball coach here in Saint Francis. I use to think it was so cool getting to be with and watch the older guys play and I just wanted to be like them.  I would go to a lot of practices and dribble a ball until they were over.  I just liked being in the gym and playing.

How's the season going so far?

The season has been going really good. We are 18-2 and we won the league tournament earlier this year. It was something that has never been done here. We are really starting to play good team basketball. We are starting to peak at the right time and I think our chances look really good going into sub-state and the state tournament.

What was it like to get the 1,000 point career milestone as a junior?

Getting the 1,000 point mark as a junior was really cool and I couldn’t have done it without all of my teammates. It’s something that I never really thought I would get as a junior.  It’s just an honor. It’s fun to think that I’m just the fifth player in Saint Francis history to get past the 1,000 point mark.  I still have the rest of this season and my entire senior season to add to it.  It is still more fun to win but it is an indication of how hard I have worked to get better.

We really have some great teammates on our team. Taylor Rogers is one of the best defensive players around here and a great all-around athlete. Brock Waters just does whatever he needs to do for our team to win.  He is a good scorer, defender and rebounder.  Quinton Cravens is probably one of the best post players around and when you pass it into him you know he’s probably going to score it.  He also can really rebound and defend.  Jeremiah Neitzel is a huge part of our defense and is a great rebounder. Then we also have Dalton Straub and Brady Dinkel coming off the bench and we couldn’t do it without them.  All of the guys are a lot of fun to play with and they are really good athletes.  We all just want to win and we have played together since we were little.

What will it take for you guys to make a run at state?

I think for us to make a run at state we need to just continue to play like we are now. If we continue playing like we have been the last couple of games I think we have a great chance to go do something big at the state tournament.

We have to get there first so we will work hard at sub-state and then worry about the next tournament, but we can do it.

What is it like playing for your dad as a coach ?

Playing for my dad the last two years has been great. He is always there to tell me what I need to work on and he is hard on me when I need it. Everytime I step on the court I know that he’ll be there for me after the game no matter what the outcome is.

What is it like to grow up in St. Francis?

Growing up in Saint Francis is very quiet, but it is also very nice. I have grown up being very close with my family, cousins and grandparents.  I also have gotten the chance to play 3 sports with the same group of friends my whole life.  In a small town there are not a lot of distractions on the weekends so I spend a lot of that time in the gym getting shots up and trying to improve my game.

Do you play any other sports? How are those for you?

I also play football and track. In football I started at wide receiver and defensive back.   This year in football we had a great season and made it to the championship game where we lost to Osborne. In track I run the 4x800, 800 and the 4x400. We placed fifth in the 4x400 last year at the State Track meet in Wichita, Kansas.

My favorite subject in school is probably algebra 2. I have always enjoyed math for the most part.

I do want to play after high school but right now all I am worried about is winning with my team and getting better every day.  I think the best way to get a chance is to do those things.  In the summer I have some camps that I have been invited to that I will go to and I think I will play on an AAU team.  I have had some schools ask for film and my grades and other info.  I will play somewhere, I just need a chance.  As far as what I would like to study, I don’t really know yet.  I like a lot of different things so I am just thinking.

Who do you model your game after?

I really don’t model my game after any certain player. I try to take certain moves from many different players and put them into my game. One player that I have taken the most from would probably be Luke Kennard of Duke. He finds so many ways to score and get his team involved and that’s something I try to do.

My favorite team is Creighton. I have been to a couple of camps there the last two years and have gotten to know some of the coaches and players so it’s always fun to watch them.

As of now I’m still thinking about what I want to be.

The best place to eat in Saint Francis is just here at home. My Mom and sister are both great cooks and they always seem to make something that we all like.  We all love to sit around and talk while Mom and Cassidy cook, and then eat.

One thing that some people might not know is that I also love to hunt. My Grandpa Ward and Dad have been taking me hunting since preschool and it’s also a good way to spend time with my family.