Brandon Mlekus (2) of Frontenac is among the states best at QBs. (Photo: Derek Livingston) 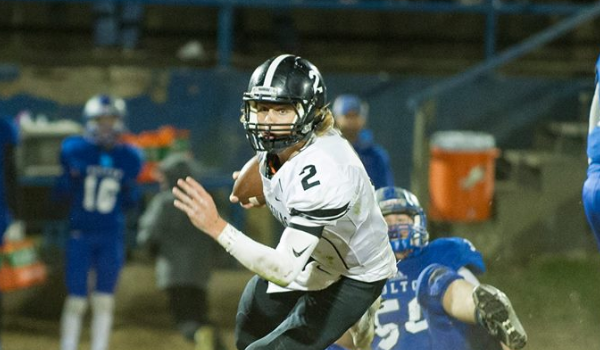 Miles, a 6-foot-5 245 pound lineman, has signed to play at Baker University out of the NAIA next season. A starter for the Lions, Miles will head to a program that was the 2016 NAIA National Runner-Up. Baker competes in the Heart of America Athletic Conference.

Hartley, a starter at wide receiver and defensive back for the Lions, signed to compete in football at Mid-America Nazarene in Olathe. MNU competes at the NAIA level in the Heart of America Athletic Conference.

Wilson is one of the best kept secrets in Kansas and lands at Coffeyville Community College. The 6’5” 185-pound senior was one of the best receivers in 4A-I this season. He’s an athletic speedster that should be a great addition to the Red Raven program. He’s also one of the top hurdlers in 4A in Kansas. Wilson is a 2017 Kansas Shrine Bowl selection.

Bicknell will play at Division II Pittsburg State this next year after being a back-to-back all-state selection in 4A-II for the Raiders. He helped lead the Raiders to an undefeated league title in 2016 and was one of the top defensive backs in the area. He also doubled as a threat in the return game and wide receiver. Bicknell is also one of the top basketball players in the CNC league this season. He has nice size at 6’1 and 195 pounds.

Flora will be one of three Frontenac Raiders to go on to play for the Pittsburg State Gorillas in the class of 2017. The two-time 4A-II all-state linebacker was one of the best playmakers in the CNC over the last two seasons on both sides of the football. He figures to be on the defensive side at Pittsburg State. Flora has the size to play at the Division II level at linebacker standing 6-foot-1 and weighing 220 pounds.

Mlekus was a huge get for the Gorillas and figures to play on the defensive side of the football after being a two-time all-state selection at quarterback for the Raiders. He was one of the top dual threat quarterbacks in the entire state of Kansas for the 2016 season. He was a Sports in Kansas 4A-II Offensive Player of the Year, as well as Top 100 Senior, Top 33 All-Classes pick by the states two major newspapers and the Craw-Kan Southeast Kansas All-Area Player of the Year. Mlekus is also one of the state’s top wrestlers in 4A.

Dean was a two-time honorable mention All 4A-I quarterback for the Grizzlies and led them into the playoffs this season for the first time since 2009. He will play at Southwestern College out of the Kansas Collegiate Athletic Conference.

McPherson signed with Sterling out of the Kansas Collegiate Athletic Conference as a running back. He rushed for over 1,000 yards over the last two seasons and was the SEK League Offensive Player of the Year as a senior in 2016. His twin brother, Isaac, who plays at Fredonia, signed with Benedictine College.

McDowell, a senior linebacker for the Vikings, has signed with Sterling College out of the Kansas Collegiate Athletic Conference. McDowell is a 6’0 210-pound senior who figures to play on the defensive side of the ball for the Warriors.

Duncan, a top 100 senior from Sports in Kansas, has signed to play at Washburn out of the MIAA. He was an all-state selection in 5A for the Dragons at defensive line. He is also an all-state wrestler.

Harris was a four year starter at defensive back at PHS. He has signed to play with Pittsburg State. The 5-foot-9, 160-pound, senior, was a three time All-SEK league pick in football and is also all-league in baseball.

Kent, a division one signee at Northwestern, was a two-time all-state selection in 5A at defensive end and tight end. He had over a dozen offers at the FBS level before choosing Northwestern last summer. Kent features the size that division one coaches want at 6’5” and 255 pounds.

Woods was an honorable mention All-5A pick as a senior for the Dragons. He may have been one of the more underrated players in the Southeast Kansas area. The 6’3” 230-pound senior has signed with the hometown Pittsburg State Gorillas. He was also a first team All-Area pick in 2016.

Peine, a 6-foot-6, 285-pound, senior, offensive lineman, has signed with Northern Iowa. The Panthers play in the Missouri Valley Conference at the FCS level. Peine was a Top 100 senior from Sports in Kansas and an All 4A-II selection this fall.