v Faces in KS: Alyssa Howard - Sports in Kansas 
Warning: include(../includes/bodytag.php): failed to open stream: No such file or directory in /home/kansass/public_html/ks/news/index.php on line 36 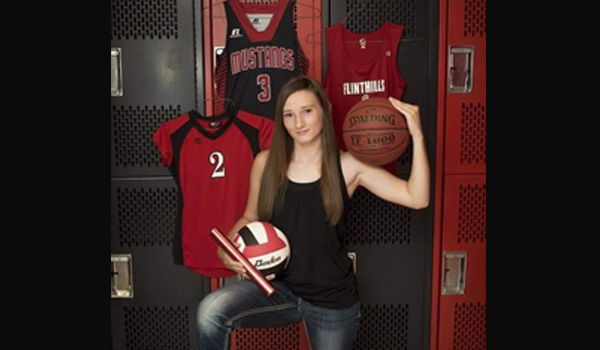 Alyssa Howard, senior at Flint Hills High School, located in Rosalia which is just 15 minutes east of El Dorado in the central part of the state, eclipsed the 1,000 high school career point milestone earlier last week as she scored 39 points in a 69-44 win over Cedar Vale-Dexter.

Howard is having a monster senior season, one in which she is averaging 22.1 points per game, 4.8 boards per contest, 4.36 steals per game, and 3.45 assists. Obviously with her career point totals, she isn't a one year wonder, she has a career average of 17.3 points per game and has been named to the Sports in Kansas 2A all-state teams over the last two seasons as a sophomore and junior. Howard has been one of the top small school girls players over the last few seasons.

The Mustang senior isn't only a basketball player either, like most small town kids, she plays multiple sports. She was a second team all-state selection this season in volleyball as her team made it to the 2A state tournament. Howard was also selected to the 2A All-State Tournament Team. Then last spring, she was also a state qualifier in track and field in the 800 meters and the 4x100 relay.

Not only is Howard having a lot of individual success over her career, her team, led by head coach Monty Melugin, is currently 10-1 and just won the league tournament at Cowley Community College for the first time since 1974 after taking third the last two seasons. Flint Hills is currently ranked sixth in the latest 2A KBCA Rankings that were released this past Monday. Last season Flint Hills finished 17-5 and were led by Howard and current teammate Ashley Melugin in finishing second in the South Central Border League.

Howard will play next season at Tabor College out of the Kansas Collegiate Athletic Conference, but for right now she is focused on getting her team to the 2A state tournament in 2017 in Manhattan. We caught up with the 1,000 point scorer below.

My dad (Brett Howard, current Principal/AD at Flinthills-Rosalia) was a coach pretty much throughout my whole childhood and I grew up watching athletics.  For as long as I remember, I participated in all most everything I could. I think having my dad so involved in athletics had a major impact on me.

What does playing basketball mean to you?

Basketball is by far my favorite sport and it has been for a very long time.  Playing basketball is a stress reliever for me. It is something that clears my mind from everything going on. It is also something that I do whenever I have some free time or just need something to do.

How has the season gone so far?

Our season is going very well so far. We are 10-1 overall.  We just played in our league tournament at Cowley County Community College and got first place. This is the first time our school has won since 1974.  The last two years we got third and second, so getting first place was an amazing feeling for us seniors.  We are now getting into the part of the season where we play all of our league schools and we are hoping to finish first in our league standings as well.

What was it like to hit the 1,000 point milestone, was it a relief?

When I figured out that I passed the 1,000 point mark, I started crying because it has been such a major goal for me.  The night I hit 1,000 points was an amazing night overall because of three reasons.  We won that game to move on in our league tournament. I broke my previous school record of most points score in a single game with 39 points on the night. The final reason of course being that I reached the 1,000 point milestone on my home court.  I had no idea that I had crossed this milestone until we got into the locker room that night after the game and my coach told the team.  I immediately burst into tears because of this accomplishment.

What do you do in the off-season to become a better player?

My off-season is mostly the summer because I am involved in other sports.  I work very hard in the summer by attending summer practices and working out in the weight room.  I also played on a MAYB team that played in about five tournaments over the summer.  Our school team also attended a summer team camp to try to improve as a team as well.  I take my summers very seriously because it is such a great time to improve and I work very hard to make myself better.

I have been lucky enough to commit and sign to play basketball for Tabor College. This was also a dream come true because a goal of mine ever since I was a little girl was to play college basketball.  I plan on majoring in Biology to then continue my education at Wichita State to become a physical therapist.

What motivates you to become a better player?

When I was younger, my motivation was watching my dad’s high school girls’ basketball team.  He had some very talented athletes and I wanted to be just like them.  When I got older my motivation was wanting to play in college.  I knew it would take a lot of work and I was willing to do that to be able to accomplish this goal. Now my goal is to be able to be a great player at Tabor and I know I am going to need to work very hard to be a good collegiate player. My team also has been one of my biggest motivations because of how supportive they have been in my quest to become a collegiate player.

Play any other sports, which ones?

What is it like to grow up in your small town?

The small community is actually a lot better than people think. Everybody knows everybody and the support from the community is amazing.  Our community is also amazing because they try and travel with us as much as possible.  I love the small town feel because you know everybody on a personal level.

I have two different colored eyes.  One is a dark brown and the other one is hazel.