v Faces in KS: Tyler Lingg - Sports in Kansas 
Warning: include(../includes/bodytag.php): failed to open stream: No such file or directory in /home/kansass/public_html/ks/news/index.php on line 36

Tyler Lingg is one of the top multiple sports small school athletes in Kansas. 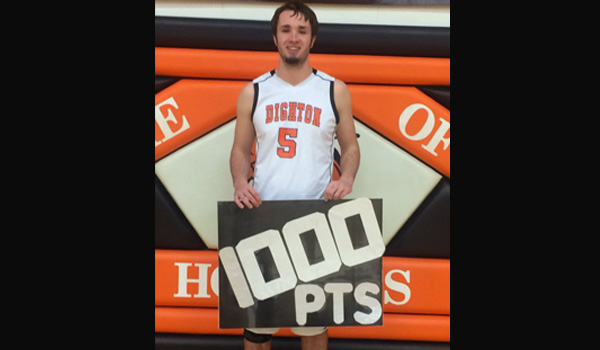 Tyler Lingg, senior at Dighton, a town of 1,038 people and high school of just 69 kids that is about an hour northeast of Garden City in Western Kansas, has established himself as one of the top small school athletes in the state of Kansas for the class of 2017.

Lingg, a 6-foot-5, 205-pounder, excelled on the football field this fall for the Hornets in leading them to their first ever state title appearance in football with just 14 players on its entire roster. Along with 8M-II Player of the Year, Dylan Foos, he formed one of the best QB/WR connections in the state for 2016. Lingg passed for 2,338 yards and 45 touchdowns in leading Dighton to a 12-1 state runner-up finish, with at least 1,300 of those going to Foos. His most impressive stat may be his accuracy as he completed 71 percent of his passes in 2016. Lingg also rushed for nine touchdowns over his senior season. On defense, from his defensive end spot he racked up eight sacks this season. Along with Foos, Lingg was a first team all-state selection in 8M-II and was named to the Sports in Kansas Top 100 senior football players in all classes of Kansas. Lingg, Foos and Lake Lewis have all been selected to play in the 8-man all-star game this summer, along with Foos going to the Shrine Bowl

Football may not even be his best sport, as Lingg doubles as an all-state basketball player. As a senior this season, he is averaging a double-double with 22.5 points per game and 10 boards per contest. Lingg averaged 13.5 points lst season and 9.1 rebounds per game to go along with 4.1 assists per game. Lingg is also a shot blocker with nearly two block shots per game. He was an all-state selection from Sports in Kansas last basketball season as a junior in his classification. Lingg went for 25 this past Friday in a 56-53 win over St. Francis as he surpassed the 1,000 career point milestone.

"Tyler is such a dynamic player. He can play any sport and he can play every position." Foos said.

Keep an eye on Lingg this season as he will try to get his Dighton Hornets (5-3) back in the state tournament, this year in 1A-I as they lost in the opening round of the 1A-II tournament a year ago. Dighton basketball, who also features Foos and Lewis, is currently ranked seventh in the state of Kansas in 1A-I by the Kansas Basketball Coaches Association as of this past Monday. Dighton boys aren't the only team in town, the Lady Hornets, who won the 1A-II state tournament last season, are still good and are led by Sara Cramer and Jordan Speer. They are currently ranked #4 in 1A-I.  We caught up with the outstanding Western Kansas senior below.

When I was a little kid my parents signed me up to do intramural basketball. I played on a flag football team over in Scott City since Dighton didn't offer a team. When I was a 3rd grader a bunch of my current high school teammates played on a tackle football with Scott City kids down in Garden City through the YMCA. We did that until middle school.

What is your favorite sport?

What was it like to go to state this year in football with a small amount of players (14) on your team?

It was an amazing experience. Having a small team made it just that much better because we were all close and each one of us knew that our teammates had our backs.

What is it like to grow up in Dighton?

Growing up in Dighton has been awesome. The whole community is just so great. It's almost like one big family. You know everyone and they know you and if you ever needed something, there will always be someone there to help you out.

Having a receiver like Dylan makes my job so much easier. He was my security blanket you could say. If we needed a play I knew that I could trust him to go up and get a pass and more times than not he would make a big play out of it. Even when he wasn't making the play, he was attracting so much attention that it gave other players such as David Cramer an opportunity to make plays. I was really impressed by him with it being his 1st year playing and being so consistent!

What off-season work did it take for you guys to get to a title game?

The off-season was a very important time for us and our success. We had a tremendous amount of kids show up to morning weights and work hard day in and day out. We also had senior led practices throughout the summer. This helped especially at the beginning of the season because most everybody knew the plays and their responsibilities.

How has the basketball season went for you?

Basketball so far has been a lot of fun. We started out the season a little slow. I kind of expected that because we had some football injuries that were still healing but now everyone is getting healthy and I'm really looking forward to seeing what this team can do the rest of the season.

What type of basketball player are you?

I'm a very patient and fundamental player. I know that in order to get big time results I have to do the little things all the time.

Other key players on your team this season?

Lake Lewis is a key player because not only can he shoot the 3 ball but can also play the post. His height is very deceiving. He know how to use his body. Dylan Foos is a good play maker for us. He opens up everyone's shot when he penetrates and kicks.

I'm currently undecided what I'm going to do at the next level.

For someone who has never played sports in a small town, what is it like, the atmosphere, the town etc?

Playing sports in a small town is a great thing. Sure we all grow up wanting to play in front of thousands of people but playing in front of a small town crowd is as good as it gets. Especially when the town is like Dighton where you get support from the entire community. The atmosphere is also amazing. Having those lights shine over you and then and playing every time we score is an awesome feeling.