v Faces in KS: Hunter Kier - Sports in Kansas 
Warning: include(../includes/bodytag.php): failed to open stream: No such file or directory in /home/kansass/public_html/ks/news/index.php on line 36 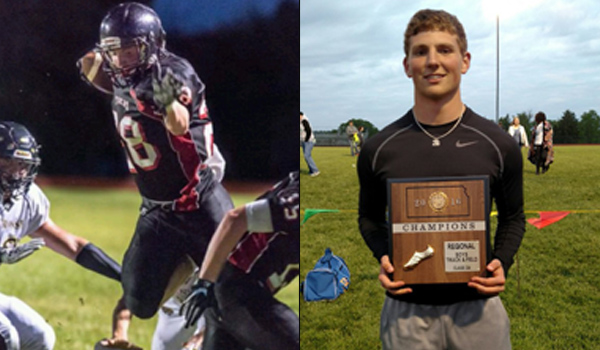 Washington County senior Hunter Kier is one of the top two-way small school football players in Kansas and has been since his junior season, where he racked up 1,456 yards and had over 100 tackles on the way to a 10-1 record in 2015. This season, things haven't changed much for Kier, besides the Tigers are in 2-1A this year and not 3A like last year. He has battled injuries but is proving his toughness since coming back to be one of the top iron man players in Kansas this season.

"I have been satisfied with how the team has done so far but on a personal side I have been disappointed when I had to miss three quarters in two of our games and missed the Troy game due to injury." Kier said.

Well Kier may have missed their biggest regular season game of the year against 2-1A #1 Troy and some other action but it hasn't stopped him from producing all-state caliber numbers once again in 2016. As a running back he has rushed for 1,148 and 14 touchdowns, while racking up 98 tackles from his linebacker spot. Washington County has an 8-2 record in 2016, but Kier was out during one of those losses against Troy. The Tigers only other loss was to 3A #1 Hoisington (47-6), in a game they trailed only 21-6 at the half.

Kier, who stands 6-foot-0 and weighs 200-pounds, is not only a top small school football player in Kansas, he is also a state champion in track and field. Last spring Kier won the 2A state championship in the discus with a toss of 156'4 at the KSHSAA State Championships in Wichita last May. He also has speed, as he was a member of the 4x100 relay team that took sixth in 2A. There are not many high school running backs in Kansas that go on to win state discus titles or throw that far. Not that we are comparing Kier to any of the following by football talent, but a few that come to mind that have been high school running backs and studs in the throws in track and field are Lance Lewis (Scott City) Monty Beisel (Douglass), Mark Simoneau (Smith Center) & Ian Rudzik (Ulysses). Pretty elite territory for sure, but it shows the explosiveness as an athlete that Kier features. Kier has a bench press of 315 pounds, squats 450, cleans 305 and features a 30" vertical, pretty impressive for a 200-pound kid in Class 2-1A.

"He's pretty special. His biggest thing is the weight room. He has worked a lot on his speed. He is a trooper." Washington County head coach Doug Thompson said.

"We will need to stay disciplined and do our assignments in order to win. With nearly everyone playing both ways, which we are used to is difficult, you have to be in shape to perform at a high level. When the fourth quarter rolls around you hope that your team is healthy. I think we have been tested and our Twin Valley league is also very competitive to help us prepare for this post season run." Kier said.

We caught up with Hunter Kier below in the latest edition of Faces in Kansas Q&A.

Q:  How did you get involved in sports?

A: I grew up around football.  My dad coached my older brother's little league football team & I went to all the practices with him until I was old enough to play.

Q: How has the season been for you so far?

A: I have been pretty satisfied on how the team has done and played but on a personal side I was disappointed when I was sidelined 3 quarters in two of our games and missed the Troy game to an injury.

Q: Whats it like to play for Washington County and Coach Thompson?

A: When Coach Thompson came to Washington County 2 years ago he was very upfront and honest with us and maintained that relationship which help bring us together as a TEAM.  As we have shown here at Washington not one player can make a team and if someone goes out its next man up.  Coach Thompson has brought lots of pride and winning attitude to our program.

Q: How tough has your schedule been?

A:  Well obviously there are some teams much tougher than others but I feel we have been tested against some of the best teams 3A class and under.  I think our Twin Valley League also is very competitive which should help prepare us for the post season run.

Q:  You only have 22 players, how difficult is that, and playing both ways?

A:  It makes practices very difficult because you barely have enough to scrimmage and if someone gets hurt there is no one else which is a pain.  It is difficult but we have been playing iron man football here for a while.  You definitely need to be in shape to perform at a high level when the 4th quarter roles around and hope the team stays healthy.

Q:  You have missed some time with injury this year, how long were you out and what happened?  you all good now?

A:  During our game with Jackson Heights I suffered a high ankle sprain.  I was running the ball up the gut and got my ankle rolled up on and my body when back over the top.  I tried to go the following week at Centralia and made it just one quarter before my ankle rolled and was sidelined again for the game.   My parents took me to a specialist in Manhattan to confirm diagnosis of just a high ankle sprain.  Despite wanting to play in the Troy game Coach Thompson said NO!  As far as all good, I guess as good as you can be this far into a football season and should be fine.

Q: How rare of a combo is a state discus champion that plays running back?  How long have you done track?  Do you look to repeat any other events as well?

A:  Dont know for sure about specific discus/running back combos but the state of Kansas has had a bunch of outstanding throwers that were also great running backs and football players.  Mark Simoneau, Lance Lewis and Ian Rudzik come to mind pretty quickly.  I have competed in track for what will be my sixth season.  I hope to defend my title in the discus and also hope to help get our 4x100 back to state again to improve on our sixth place finish last year.

Q:  Who are some other key players to watch for?

Q:  Have you noticed a difference from 3A last year to 2A this year?

A:  I think with our schedule this year we have had a very similar schedule strength from a year ago.  I have no doubt 3A football holds probably the greatest in class variance from the bottom to the top.  It is very difficult when playing the Hoisingtons with roughly 50 kids on the sideline and fresh guys to bring in late in games to most 2A schools playing close to iron man football.  That isn't to say there aren't good teams at the 2A because there are quality teams.

Q:  What will it take to get a win against Colgan?

A:  We need to stay disciplined and do our assignments.

Q:  How important is the weight room to you? What did you do this past off season to get better?

A:   Think everything with sport begins and ends with the weight room.  When I was an 8th grader I wanted to be able to start and play with my older brother who is two years ahead of me in school.  I knew the only way to accomplish what I wanted was being able to beat seniors out for starting spot.  So I begged my parents to buy me a free weight set which they agreed to but with the stipulation that if it wasn't used it would be sold.  I have spent lots of time with those weights.  As for what I did this off season to get better, I have spent the last 3.5 years with Jake Sharp and David Leonard at Sharp Performance in Salina.  I also attended many college camps through out the midwest.  My goal has been and continues to be to play football in college.

Q:  Plans at the next level?

A:  To play football and get my degree in business

Q:  Play any other sports than football and track?

A:   Basketball I didn't go out last year but intend to my senior year

Q:  One thing the average person doesn't know about you?

A:  I enjoy Hunting and the outdoors.