v Faces in KS: Cailie Logue - Sports in Kansas 
Warning: include(../includes/bodytag.php): failed to open stream: No such file or directory in /home/kansass/public_html/ks/news/index.php on line 36

Cailie Logue of Girard is among the nations top runners. (photo: Greg Hall) 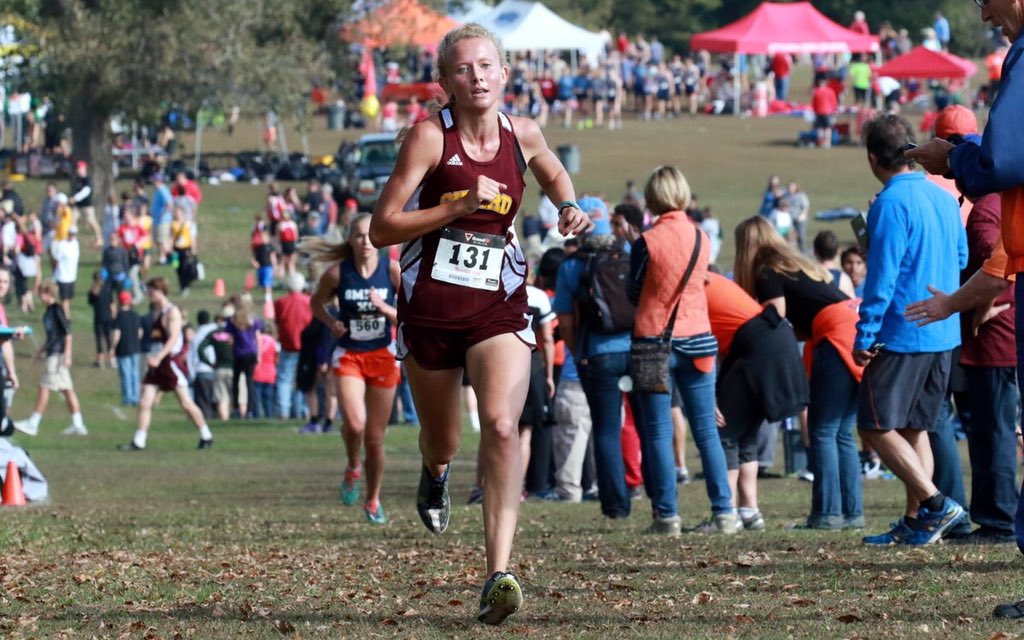 Girard may be just a small town located at the intersection of Highway 7 and Highway 47, and may have just under 3,000 total people in the community, but one of those is a local celebrity. Cailie Logue, one of the nation’s top runners that is a senior at Girard, has established herself as one of the fastest runners in United States for the class of 2017.

Logue, who has just committed to Iowa State University two weekends ago, has the second fastest time this fall in the nation and at one point held the fastest time in the 50 states. Logue chose the Cyclones for many reasons, including quickly bonding with the Cyclones cross country team and coaching staff.

Logue was approached by Rich Weins, a physical education teacher at Girard, nine years ago, when Logue was in third grade. Weins noticed that Logue looked like she liked to run and suggested that she compete in the Hershey’s track and field championships. Logue has since become a superstar in the small town located in southeast Kansas.

If you’ve attended the KSHSAA track and field state championships held every May at Wichita State’s Cessna Stadium, then you’ve probably heard Logue’s name announced several times. Logue has won nine state titles, three in cross country and six on the track. She has won the 3200m run three times, 1600m run twice and the 800m once. She’ll look to become just the fifth Kansan to ever win state titles in cross country all four years, as she’ll run at state this Saturday.

Logue set three class 4A meet records last spring as a junior at the KSHSAA state championships. Logue set the records in 800, 1600 and 3200 en route to state titles in each of those races. Logue has twice earned Gatorade XC Athlete of the Year in Kansas and was the 2016 Gatorade Track and Field Athlete of the Year in Kansas. She also won the prestigious Festival of Miles last June in St. Louis with a time of 4:46.09. Her 1600 time of 4:44.08 is third all-time in Kansas history in any classification, while her 3200 time of 10:07.96 is fifth all time. Logue's biggest accomplishment so far was taking third at Nike Outdoor Nationals in Cross Country last fall as a junior.

Logue trains six or seven days a week, usually 30-60 miles per week. She also trains 48 out of the 52 weeks in a year. Logue has also proved she has a lot of range in running as she has won the 400, 800, 1600, 3200 all three years so far at the CNC League Meet, not something you see every day. She only enters three individual events at the state level, where she is elite and record breaking in the 800, 1600, 3200, but she has never lost a CNC League Meet race at 12-0 in three seasons. If you could enter more than four events at one time, there's no telling what Logue could do on an afternoon of running.

Track and field and cross country running and coaching is in the Logue family genes. Errol Logue, Cailie’s grandfather coached Cailie’s dad, Matt. Matt was a three-time All-American at Pittsburg State University, where he met his wife, Christie. Christie was an eight-time Division II national champion in the 5K and 10K races.

The town of Girard may be small, but according to Logue, there are plenty of things to do, such as attend school and church activities. Logue lives outside of the town and enjoys running long distances out on the country roads and trails.

Logue, along with her team, will compete in the 4A state meet held on Saturday, October 29 at the Wamego Country Club, where she will look to become just the fifth girl in Kansas history to win four cross country state titles, regardless of classification. By the time the state meet rolls around in 2017, Logue could go down as the best girls prep runner in Kansas high school history. We caught up with Logue in the latest Q&A edition of Faces in Kansas below.

This feature is presented by Producers Cooperative Association's Farm Store in Girard, we are committed to making your life easier by supplying you with the things you need. As always, we have a great selection of farm and ranch supplies, including pet supplies, fence and corral building supplies and equipment, automatic waterers and feed bunks, tack, dog food, pet and animal health supplies, ear tags, work wear, boots, bird seed, and much, much, more. Please, come in and check out our great deals on lots of new merchandise including YETI. Come see us at 300 E. St. in Girard.

Also special thanks to Mathis Drug Store in Girard for powering 4A updates with Sports in Kansas this fall.

Be sure to nominate the Craw-Kan "Your Community Technology Partner" Team of the Week every week by emailing chetkuplen@kansas-sports.com or tweeting @sportsinkansas

Q & A with Cailie Logue

Q: You've recently committed to Iowa State, what made you choose the Cyclones?

A: There are many things I like about Iowa State. My favorites are Coach McDonough and the team. On my visit, I really enjoyed spending time with the girls on the team, and I felt comfortable with Coach McDonough. My visit was very exciting, and my excitement from my visit still hasn’t worn off. I also considered if I wasn’t running at the university, would I still be happy? Iowa State’s academic environment, campus lay out, and the town of Ames were the right fit for me.

Q: What is your training like? How often do you train?

Q: What's it like having your dad as your coach?

A: My dad was also coached by his father Errol Logue, and has perspective on having a dad as a coach. I appreciate all my dad does for me as a dad and a coach because he is an advocate for his athletes and children. He is always helping me do what is necessary to succeed and become a better person in running and in life in general.

Q: You're one of the top runners in the entire country, what has made you so talented?

Q: What's it been like living in Girard? Have you always lived there and what is there to do in such a small town?

A: I live outside the town of Girard, but I love being a part of the Girard community. Although there is not a movie theatre or a mall in the town of Girard, there are many school and church events that keep most people, including myself, plenty busy.

Q: Both of your parents were runners in college, does running just run in the family's blood?

A: It seems to! Both of my grandfathers ran Track & Field in highschool, and my grandpa Logue went on to be a distance runner at Friends University and later became my father’s high school coach. He was inducted in the Kansas coaches Hall of Fame and the Friends University Hall of Fame. My parents both ran in high school. My father was a 4 time Kansas State Champion, and a 3 time DII collegiate All-American at Pittsburg State University. My mother, Christie Allen Logue, also ran at PSU and was a 8 time national champion and 11 time All American.

Q: What are some of your favorite places to run?

A: My favorite places to run are the dirt roads and trails on which our team does most of their training.

Q: Where all have you traveled to run?

A: This past summer, I traveled to Portland, OR, for Nike Elite distance running camp and Alamosa, CO, for Adams State High Altitude Distance Camp. Last fall, I competed at Nike Regionals in Sioux Falls, SD, and Nike Nationals in Portland, OR.

Q: What goes through your mind on race day? Before the race? During the race?

A: Each race, I only want to do my best. One of my team’s pre race rituals includes a prayer huddle. I try to approach each race as an opportunity to improve and have fun.

Q: Who has impacted you the most in your life?

Q: Do you have a favorite athlete?

Q: What extracurricular activities are you involved in?

A: Many! Some include Band, Girard United Methodist Church youth group, Kayettes (leadership & service organization), FCCLA,  4-H, and our school newspaper The Trojan Tribune (I am a photographer and reporter).

Q: Did you ever compete in any other sports, or just XC and T&F?

A: In middle school I tried volleyball my 7th grade year, and I played basketball in 3rd through 8th grades.

Q: At what age did you begin competitive running?

A: After moving to Haderlein Elementary School in the 3rd grade, my Physical Education teacher, Rich Weins, encouraged me to try Hershey’s Track & Field. This was my first time running competitively. In the seventh grade, I began to train for the first time.

Q: What is one thing an ordinary person wouldn't know about you?

A: The only thing I can cook are desserts.

Q: What is one word to describe yourself?