v Faces in KS: Dillon Williams - Sports in Kansas 
Warning: include(../includes/bodytag.php): failed to open stream: No such file or directory in /home/kansass/public_html/ks/news/index.php on line 36 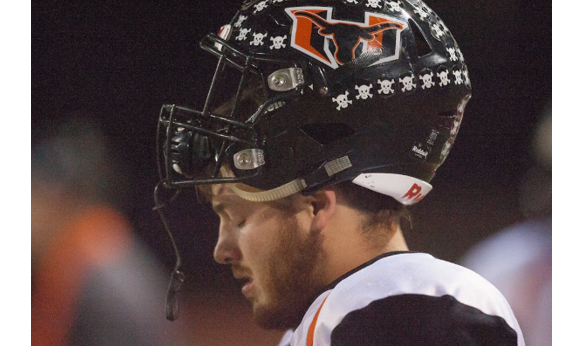 Holcomb senior Dillon Williams is one of the best linebackers in all classifications of Kansas. The senior has 485 career tackles and was selected as the Sports in Kansas 4A-II Defensive Player of the Year as a junior last fall as he helped lead the Longhorns to the 4A-II state championship.

Things haven't changed for Williams and Holcomb, the number one ranked team by Kpreps in 4A-II at 7-0. The 6-foot-0, 227-pound, senior linebacker and fullback, continues to get it done on both sides of the football. He has 85 tackles over the first seven games of his senior season and has started all four years at linebacker for the Longhorns. On offense, used primarily as a blocker, he has 1,645 career rushing yards and 22 career touchdowns as a fullback. Williams, although not receiving major division one interest at the time, is one of Kansas' toughest players in the class of 2017 and he proves it every Friday night. Williams has great size for the linebacker position in college, features a 4.6 40-yard dash, benches 350-pounds and squats 450-pounds. He was also part of the 2015 4A-II state champion Longhorn basketball team.

"I am a completely different person outside of football but when I play football I am exceptionally aggressive. I strive to be the best and outwork anyone and everybody. I play the game with a ton of emotion and passion. I have some junior college offers right now and would like to go on to college to play football and gradate." Williams said.

The good thing for Williams, he is surrounded by a cast of very good players much like himself. Conner VanCleave, a senior tight end and defensive end, is back for his senior season after earning all-state honors at defense last season. VanCleave is a three-sport all-state selection in football, baseball and basketball. Brandon Stegman, a senior utility man that also earned all-state honors in 2015, can do a little bit of everything for the Longhorns and leads them in receiving. First year starting quarterback Trey Gilbert is among the states leaders in passing for 4A-II and has 1,320 passing yards with 22 touchdowns. Junior Kaden Tichenor leads Holcomb in rushing this season and has six total touchdowns on the year. Senior defensive back Michael Roth has picked off five passes to lead the defense, while Stegman has four.

"Our expectations are to go undefeated and win back-to-back state championships. We have a lot of key players and everyone that plays on this team is a key player. In order to win, everyone has to do their job." Williams said.

Holcomb, led by head coach Kent Teeter, went 11-2 in 2015 and captured the 4A-II state title with a 21-0 win over Holton in the title game, a game which Williams totaled 16 tackles. The only losses in 2015 were to 4A-I Ulysses and then 3A Scott City. This season the Longhorns have been perfect and beat the two teams they lost to in 2015 in now 4A-II Scott City (32-13) and Ulysses (52-0). A 14-point win over Colby in week five has been the closest test for Holcomb as they won 27-13. This years team is primed to repeat but will first have Pratt (6-1) in districts this Friday.

"We have put in a lot of hard work and dedication. We have had good athletes here in the past but couldn't put together a championship team. Everyone has really bought in over the last couple of years to the program. We know teams are going to give us their best shot and that's a good thing because they're going to get our best shot as well." Williams said.

We caught up with Dillon, who could get that milestone 500 career tackle mark over the next couple games, in the latest Q&A edition of Faces in Kansas below.

American Implement of Garden City. Visit us at 2611 West Jones Avenue or give us a call at 620-275-4114. Check out featured John Deere Equipment at www.americanimplement.com. American Implement is a proud supporter of the Holcomb Longhorns.

I watched football on TV with my father and every since then I've always wanted to play.

How has this season went so far?

This season has been great! We are off to a 7-0 start and we are looking really tough this year.

How would you describe yourself as a football player?

Exceptionally aggressive. I always strive to be the best and outwork anyone and everybody. I play the game with a ton of emotion and passion as well.

Expectations for your team this year?

My expectations for the team this year is to go undefeated and win back to back state championships.

What is it like having a target on your back after you guys won a state championship?

It's not all that bad. We know that teams are going to give us their best shots and that's a good thing because they're going to get ours as well.

What is it like to play for Coach Teeter?

Coach Teeter is an interesting guy. He’s a really great coach and knows a lot about football. He knows when it's time to joke around and when it's time to get to business but overall it's great playing for him.

Who are some of the key players on your team this year?

Brandon Stegman, Conner VanCleave, Kyol Blackburn, Alex Ortega, Dayton Quint, Trey Gilbert, and Jonathan Prieto. I think that everyone that plays is a key player. In order for us to win everyone has to do their job.

How has Holcomb become a power in football in a short amount of time?

A lot of hard work and dedication. We have had good athletes in the past and just couldn't put together a championship team and throughout these past couple years everyone has really bought into the program. Once people bought into the program and worked hard it was a matter of time before we were a force to be reckoned with.

Favorite place to eat in Holcomb?

What is it like to grow up in a small western Kansas town?

Its really cool living in a small town. Everyone knows everyone and that's not always a bad thing. It is great getting to know and talk to everyone in your town. It's not as hectic as being in a bigger town.

It is full of high excitement. There are speeches and pep talks. It's great seeing the fans and the support they give to us.

I would like to go on to play college football and graduate college. I have some offers from some jucos.

I am a completely different person outside of sports. I enjoy being around friends and family.