v Faces in KS: Wyatt Hubert - Sports in Kansas 
Warning: include(../includes/bodytag.php): failed to open stream: No such file or directory in /home/kansass/public_html/ks/news/index.php on line 36

Wyatt Hubert (81) of Shawnee Heights is among the states elite defenders. (submitted photo) 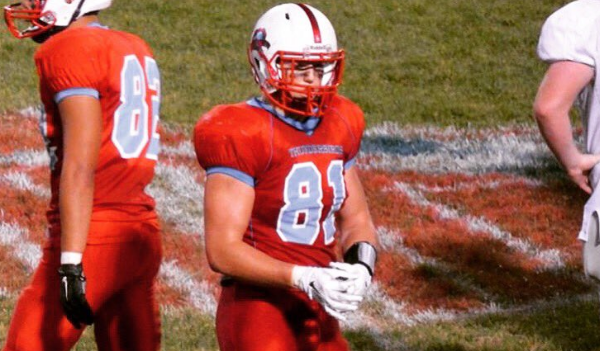 When it comes to explosive football players in the state of Kansas, there are perhaps none as explosive as Shawnee Heights senior, Wyatt Hubert. Hubert, a 6-foot-4, 250-pound, defensive end and tight end, has a 4.75 40-yard dash time, a 350-pound bench press, a 450-pound squat, cleans 345 pounds ,and dead lifts 520 pounds. Not numbers you often see across high school football teams in the state of Kansas.

"I put in a lot of extra work this off-season that consisted of summer weights, defensive end drills in the afternoon and conditioning in the evening. I improved an aspect of my game everyday. I also worked with trainers to improve my quickness and strength." Hubert said.

College coaching staffs took notice after Hubert's breakout junior campaign in 2015 that landed him as a First Team All Non-Senior from Sports in Kansas last fall. It ultimately landed him an offer to play defensive end at Kansas State after his visit last February. He was offered on February 6th of last year and committed just two days later.

Hubert isn't just one of those kids that's recruited because of size or what he does at combines or in the weight room, sure he does all those things very well, but he really proves it every week with his play on Friday nights. He is arguably the states best defensive end this season, despite constant double teams, and has eight sacks to rank third in 5A this season. He also has 63 tackles to rank near the top in the state among all defensive ends in Kansas. Hubert also has over 500 yards receiving and a couple touchdowns as a tight end in his career.

"I am strong so I can take on double teams. I am also quick and have a quick first step explosion which is difficult for tackles to block me with my technique." Hubert said.

Shawnee Heights, led by head coach Jason Swift, isn't having quite the year that Hubert expected, going just 2-5 over the first seven weeks. However, with the new playoff system in 5A in place for week nine, it will start a new season for everyone. That doesn't mean they can't catch fire at the right time. Two years ago the Thunderbirds started the season 1-4, before winning six straight, making the 5A semifinals and finishing 7-5 on the season. A 5A semifinal game they lost in 2014, 42-41, to eventual state runner-up St. Thomas Aquinas.

"The season is going good, our teams record is not like what we wanted but we are improving every week. Playoffs will be tough with everyone making it and it will be different because there doesn't seem to be a powerhouse team like there has been in the past. Teams that are supposed to win are going to lose and teams that are supposed to lose are going to win. I'm excited to see it this year. The playoff run two years ago was an unforgettable experience." Hubert said.

For now, Shawnee Heights and Hubert have their last regular season game of the year in week eight this Friday at Emporia. We caught up with the outstanding senior below.

I got involved from watching my older brother and older cousins growing up playing!

It was long and often times stressful. I'm thankful that it ended the way I planned it to end.

How did the offer happen at KSU and how did you decide to commit and why?

On February 6, I went on a visit to Kansas State and the moment I walked in I was taken into the defensive end coaches meeting room and I was offered there on the spot. I decided to commit on February 8 because it was the school that I had always grown up watching and was the best school that suited me.

What is it like to play at Shawnee Heights?

Playing at Shawnee Heights is awesome, there's no other program that rather be a part of, the coaches expect your best at everything and just want you to always give 100% on the field at practice, and games, in the classroom, and in our personal lives. They are all great mentors and role models.

What was it like to play in that deep playoff run two years ago?

It was an unforgettable experience, the memories I had with that year were amazing. Everyone was bought in and we are talented at every position which allowed us to keep winning games.

How is the season going so far for you?

The season is going good, our teams record is not like what we wanted but we are improving every week.

What makes you such a difficult player to block?

I'm strong so I can take on double teams well, and can fit my run reads well also. I'm also quick and have a quick first step explosion off the snap which allows tackles to have a hard time blocking me because my quickness and my technique in my pass rushing.

What did you do this off-season to make you become a better player?

I put in extra work, my summer days consisted of summer weights in the morning, defensive end drills in the afternoon, and conditioning in the evening, i improved an aspect of my game everyday. Also working with trainers to help with my strength and quickness.

How tough will the 5A playoffs be this year, it seems like everybody has a wide open shot in 2016?

Other players to watch for on your team?

Offensive/Defensive Tackle Cade Holmes. Cade is a really big guy and has a great technique for an offense tackle, he's a hard-nosed football player that doesn't take plays off and has a great work ethic.

Running Back Christian Clark. Christian is both a downhill runner and is not afraid to lower his shoulder and get yardage, but he is also very fast and shifty and can make you miss.

My favorite subject in school is science but more specifically human anatomy, I love to learn about the human body.

My favorite Kansas state football player is Jordan Willis, he's the most experienced defense end and has awesome leadership skills.

Best social media app and why?

I'd have to say that Twitter is probably the best social media app, Twitter has everything, I've also seen some of the funniest things I've ever seen before on Twitter. It also was one of the main roles in me getting recruited.

Do you play any other sports, which ones? Do they help you out for football?

I am a thrower in track and field and a power lifter, both benefit me extremely for football.

Favorite place to eat in the Topeka area?

My favorite place to eat in Topeka is Buffalo Wild Wings or the Shack bar and grill.

I love to read books that help me improve my morals and values. Books about work ethic, discipline, bettering yourself, etc.