v Faces in KS: Hunter Hanzlick - Sports in Kansas 
Warning: include(../includes/bodytag.php): failed to open stream: No such file or directory in /home/kansass/public_html/ks/news/index.php on line 36

Hunter Hanzlick of Hoisington has the #1 Cardinals primed for a deep run in 3A. (photo: Joey Bahr) 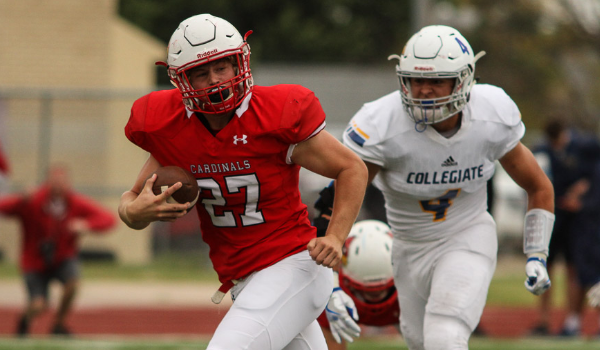 The Hoisington Cardinals will enter Friday’s district play with a perfect 6-0 record and the number one ranked team in the state in the latest Kpreps Poll. The Cardinals have outscored their opponents 259-53, a big part of the success has been the Cardinals offense. Hoisington is averaging 43.2 points per game and is led by senior running back, Hunter Hanzlick.

Hanzlick has proved himself to be one of the top rushers in the state, as he climbed over the 4,000 career total rushing yards mark against Washington County on September 23. He is a returning All-3A selection and was named to the Sports in Kansas All Non-Senior Team last fall. Hanzlick has been a big part of the Cardinals success, but another big portion of it goes to Hoisington head coach Zach Baird.

Baird, a Hoisington native has guided the Cardinals to a 20-3 mark in his first two years and has the Cardinals off to a hot start this year. The Cardinals are on their third coach in six years and Baird has turned the program around from a 4-win team in 2013 to back-to-back playoff appearances, including a trip to the 3A sectional round last fall before being ousted by Halstead. In Baird’s first year, the Cardinals made it to the regional round before losing to Minneapolis.

The Cardinals district will feature just one team with a winning record, while the other two are still searching for their first win of the season. Hoisington will have Ellsworth, Larned and Lyons in their
district, Larned and Lyons are also in the Central Kansas League along with Hoisington.

Hoisington’s offense is based on running the ball first, running the ball for 241 plays, while passing for just 33. Hanzlick leads the Cardinals ground attack, having 127 of the 241 carries. Hanzlick will enter district play with 1,011 rushing yards and 15 touchdowns, both team highs.

The Cardinals offense has been unstoppable this season, averaging 413 yards per game, including all six games that Hoisington has rushed for over 332 yards every game. Senior Cameron Davis is second on the Cardinals team in rushing yards, nearing 700 yards on 40 attempts and eight touchdowns.

Hanzlick says none of his offensive production would be capable without the hard work that his offensive line puts in through practices and games. The Cardinals offense is also hard to stop as they run the triple option and Hanzlick’s speed and power has given opponents fits.

Another thing that is unique about the Cardinals team is that most of them have been playing together for 10 years, most have been together since third grade. The Cardinals work well together both on and off the field and will look to keep the streak going as they enter district play on Friday night at Ellsworth.

Manweiler Chevrolet of Hoisington- Four Generations Supporting the Cardinals for 88 Years - Give us a call at 1-866-869-3740 or visit us online at www.mchevy.com.

First Kansas Bank with locations in Hoisington, Claflin, Great Bend and Hays. Proud supporters of the Hoisington Cardinals. Find us online at www.firstkansasbank.com

Also be sure to nominate the Nex-Tech Wireless Central Kansas and Western Kansas Athlete of the Month by emailing chetkuplen@kansas-sports.com. Nex-Tech Wireless is a proud supporter of Sports in Kansas. Visit them online at www.nex-techwireless.com

Q: How did you get involved in football?

A: I've played football ever since I was little from 3rd grade tillnow. This is what makes playing football so special because I've been playing with the same guys for 10 years now.

Q: You and your team are off to a perfect 6-0 start, what makes this team so good?

A: What makes this team so good is our capability to do the little things right and this is what makes us successful.

Q: What are your expectations as the regular season wraps up?

A: We need to take it one step at a time and keep everybody healthy.

Q: What is it like playing for Coach Baird?

A: Coach Baird grew up in Hoisington so it shows you just how much he cares about the pride and tradition of Hoisington.

Q: Who are some of the key players on the team?

A: When you have a good team that works together it is hard to pick out specific players, but in my eyes Landen Urban is a key component to our defense and makes the team better all-around.

Q: Your team has scored over 31 points in every game this year, what has been the key to the high powered offense?

A: The triple option is hard to stop especially when you have 4 really good athletes in the backfield.

Q: You were bumped out of the playoffs last season by Halstead, what will it take for the Cardinals to go deeper this year?

A: It's good to have that experience to fuel the fire for us 10 seniors because we don't want that to happen again.

Q: District play starts on Friday, these are the games that really count, what will it take for your team to go 3-0 in district?

A: We have to stay focused on the task at hand and cannot look forward, but just take it one step at a time.

Q: What makes you so tough to bring down when you're running the ball?

A: I have the ability to make defenders miss but yet run through tackles that's why I am hard to bring down.