v Faces in KS: Ben Murray - Sports in Kansas 
Warning: include(../includes/bodytag.php): failed to open stream: No such file or directory in /home/kansass/public_html/ks/news/index.php on line 36

Ben Murray of Southeast of Saline is one of the most versatile players in Kansas. (submitted photo) 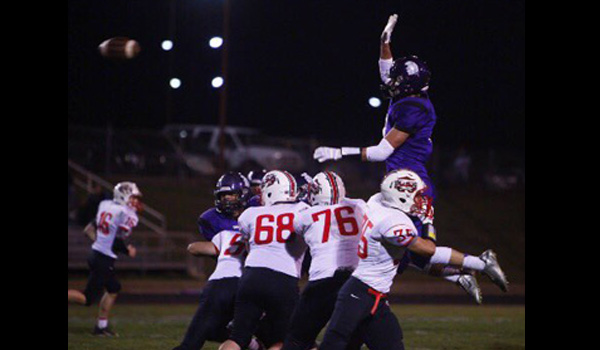 Southeast of Saline senior Ben Murray, a 6-foot-0, 190-pound, utility-man, is one of the most versatile players in the state this season. He has proved that with his ability to run the football, catch the football, return kicks and be one of the top defenders in the 3A classification, no matter what position he lines up at. Murray also has his team off to a 6-0 start in 2016.

"I like to think im pretty versatile on the football field. With the combination of size and speed it allows me to play a few different positions. I have played safety, linebacker on defense and I primarily am a slot reciever on offense, but also we have a package where I play tailback." Murray said.

Murray features sub-4.6 speed in the 40-yard dash and is racking up stats in a variety of different ways in 2016. On offense as a reciever he has 26 receptions for 526 yards and eight touchdowns, while rushing for 226 more and six more scores. As a return man he has 201 punt return yards and another 132 as a kick returner with two punt returns for touchdown and a kick return for touchdown. He has accounted for nearly half of his teams points, 122 of the 250 scored through six games. He has eight two point conversions and also has kicked four extra points. On defense, he has two interceptions and 33 total tackles. There isn't much the senior athlete can't do. Murray was a first team All Non-Senior from Sports in Kansas as a defensive back last fall, as well as an all-state selection in 3A.

Southeast of Saline isn't all just Murray either. Senior Bryce Banks has proved to be one of the top 3A quarterbacks this season so far. He has passed for 1,270 yards and 12 touchdowns throughout the first six weeks, while rushing for another 406  with seven touchdowns.

"Bryce is a competitor, period. He is very intelligent and does a great job of running our offense whether it's a read option of throwing a nice ball." Murray said.

Along with Banks and Murray, Southeast of Saline, led by head coach Mitch Gebhardt, features Jackson Montgomery who has caught 28 balls for 319 yards with three touchdown receptions. Running Back Hunter White also has over 400 yards combined of offense and four touchdowns. Hunter Adams (DE), Brooks Garretson (LB) and Dylan Marks (DT) have all stepped up big in 2016 to lead the defense.

"We have a lot of players who stepped up this year. It's hard to complain about being 6-0 and league champs" Murray said.

The Trojans face a very tough district in 3A this season with their next three games against Marion (6-0), Hesston (3-3) and Hillsboro (2-4), with only two teams moving on the playoffs.

"Marion is a very good team with good team speed. We will need to bring the same inensity and focus we had last Friday night and limit out mistakes." Murray said.

Although Murray may be making some headlines around the state for his versatile play, he's only worried about his team making a deep run in 3A and that starts on Friday night with the district matchup on the road at Marion. Marion has went undefeated this year in the Heart of America and is coming off a 38-6 victory over Hutchinson Trinity, while Southeast is coming off a huge 48-26 victory over Beloit to remain undefeated in the NCAA.

"We wanted to win our league, which we did and now we want to win our district and make a deep run into the playoffs." Murray said.

We caught up with Murray in the latest edition of Faces in Kansas.

Special thanks to the Southeast of Saline Education Foundation for powering 3A updates with Sports in Kansas this season.

Also be sure to nominate the Nex-Tech Wireless Central Kansas Athlete of the Month by emailing chetkuplen@kansas-sports.com. Nex-Tech Wireless is a proud supporter of Sports In Kansas. Visit them online at www.nex-techwireless.com

Sports have always been a big part of our family life and activities starting with playing on my brother's soccer team when I was 4.  I actually started playing football on a 6-year old tackle football team in Dallas, Texas just before moving to Salina.

Hows the season going so far?

The season is going very well.  It's hard to complain about being 6-0 and league champs.

You seem to be used in a variety of ways, describe yourself as a football player?

I like to think I am a pretty versatile football player.  Being blessed with a good combination of size and speed allows me to play a few different positions. On defense, even though I play free safety, the coaches allow me to play almost like a linebacker depending on the opponent's offense.  On offense, I primarily play slot receiver which gives me the opportunity to both catch and occasionally run the ball.  Recently, we put in a run package where I play tailback.

What did you do this off-season to make yourself one of the best in 3A?

Unfortunately, I pulled my hip flexor in the first track meet last year and missed the entire track season.  Summer started with another hip injury which hampered my summer workouts which consist of lifting at school and speed and agility workouts at Sharp Performance.  Fortunately, for most of my high school career, I have had the opportunity to work with David Leonard on my receiving and defensive back skills and Jake and Cale Sharp on speed and strength.  Everything finally feels pretty good now.

Bryce is a competitor. Period.  He is very intelligent and does a great job of running our offense whether it's a read option or throwing a nice ball.

Jackson Montgomery (WR & OLB) and Hunter White (RB / OLB) are very good on both sides of the ball as are Hunter Adams (OL/DE), Dylan Marks (OL/DT) and the rest of our linemen that play both ways.  Brooks Garretson, who was injured last year, has come back and is playing great at inside linebacker.

What is game night like at SE of Saline?

It's a great football atmosphere.  We receive a lot of student and community support.  Home game crowds are always big and loud.

What will it take for you guys to get a win this week and stay undefeated?

Marion is a very good team with good team speed.  We will need to bring the same intensity and focus we had last Friday night and limit our mistakes.

Goals for this season?

We wanted to win our league which we did.  We now want to win our district and make a deep run into the playoffs.

Plans at the next level, any interest or offers?

I am still considering my plans for playing at the next level.  I have received interest from  FBS schools such as K-State and Wyoming, some FCS schools such as North Dakota State, Missouri State and Illinois State, several DII schools and junior colleges.  I just want to finish the season and consider my options then.

What was it like to have an older brother that was all-state, was that an advantage growing up with someone who's been there before?

Aidan was a constant example of the hard work required to be successful both in sports and in the classroom.  He was physically and mentally tough and continues to draw on that toughness today while playing at K-State.  While he was a quiet leader, I drew a lot of confidence just being on the field with him.  I remember the first game I started as a freshman, his only comment to me to calm my freshman nerves was "Don't screw up" followed by "and don't embarrass me."

Favorite place to eat in the Salina surrounding area?

One thing the average person wouldn't know about?

I may not be very good at it but I like to sing.