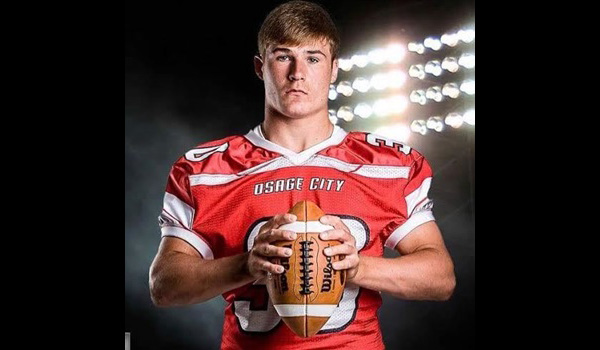 Osage City, located about 35 miles northeast of Emporia, hasn't been known as a football power over time. They have just two playoff wins it it's school history and haven't made the state playoffs since 2011. Their basketball team has put them on the map recently as they won the 3A state title last March. However, some attention has been brought to Osage City football this fall and the reason is senior linebacker Brett Sage.

Sage, a 5-foot-11, 190 pound, linebacker, with 4.70 40-yard dash speed, isn't the biggest, fastest, or heavily recruited football player in the state by any means, but he has a nose for the football and is just one of those guys that gets his job done every Friday night. In fact, he really gets his job done, his tackling numbers through six weeks are video-game like. Sage has registered a state leading 128 tackles in six weeks of play to lead the entire state of Kansas in 11-man in all classifications. That's an average of 21.3 tackles per game. The second most for 11-man this season in Kansas are from Joel Donn of 5A Mill Valley with 122. The only person who has more is an 8-man player, which is in a different statewide leaderboard category, in Joel Green of Stockton with 137. Sage isn't just a one-year wonder either, he had 107 tackles last season and has 316 in his career heading into week seven of his senior season.

"I'm definitely not the biggest or fastest guy on the field. I haven't been intimidated by anyones size and I see myself as a very physical player. As far as the numbers, it helps a little that our league is more run oriented. Every time the ball is snapped I expect to be in on the play. That feeling comes nauturally of knowing where the ball is going to be." Sage said.

Well there is no question that Sage has an eye for the football. He also plays offense for the Indians and has over 400 yards rushing on the season with seven touchdowns. Sage and his Indians aren't where they want to be this season at 2-4 headed into district but district time also means new life. Osage, led by head coach Andrew Gantenbein, has been in some close ones this year and their four losses are to teams that combine for a 20-4 record. Two of their four losses to Mission Valley and Council Grove came by a combined three points with the MV game going into overtime two weeks ago. Heading into a district with games in this order, Wellsville (5-1), Central Heights (1-5) and West Franklin (1-5), the Indians have a definite shot to make the 3A playoffs for the first time since 2011.

"The season hasn't gone as planned and have lost a copuple close ones. We are trying to build from those games and use them to prepare for the rest of the season. We need to play a full game, not just two or three quarters. Everyone needs to focus on one play at a time and do their job."  Sage said.

Osage City and the states leading tackler in 11-man will begin their quest for the 3A playoffs this Friday as they take on the district favorite, Wellsville (5-1) at home. We caught up with Brett below in the latest edition of Faces in KS.

This feature is presented by L&M Construction, General Excavation, proudly serving the Osage City and surrounding area. Give Mike Fager a call at 620-341-0333 for all your excavation, water, sewer or soil conservation needs. L&M Construction is a proud supporter of Osage City Indian Football.

I started in 3rd grade-Some buddies asked me if I wanted to play with them in Topeka at the Sportszone.  I have played ever since.

It is not going as planned.  We have played good teams and have lost a couple close games.  We are trying to build from those games and use them to prepare us for the rest of the season.

How can you describe yourself as a football player?

Definitely not the biggest or fastest guy on the field.  Since I started playing I haven’t been intimidated by anyone’s size.  I see myself as one of the most physical players out there.

Those tackle numbers almost seem made up, how have you managed to pick up so many?

It helps that our league runs the ball more than they pass it.  Before the ball is snapped I expect to be in on the play.  I feel that it comes naturally, knowing where the ball will be.

What did you do this off-season to make yourself one of the best tacklers in Kansas?

I went to a few local camps over the summer.  I was also in the weight room constantly, working on my speed and strength.

We have so many athletes on the team it is hard just to pick one or two, everyone is important.  However, Jason Cooley, Tucker Kimball and Carter Swindale will have big roles for us moving into District play.

Osage isn’t known for being a football powerhouse, but when it comes to Friday night Osage City has a great atmosphere.

What will it take for you guys to get into the playoffs?

Consistency, we need to play a full game, not just 2 or 3 quarters.  Everyone needs to focus on one play at a time and do their job.

Goals for this season?

Make it to playoffs and take it one game at a time.  I want this team to the team that changed the way football is perceived in Osage City.

Plans at the next level, any interest or offers?

Yes very interested. I would like to go play football or baseball somewhere but no offers as of now.

What's it like to play for your Coach Gantenbein?

I enjoy playing for Coach G, he is laid back and easy to get along with.  I feel like I have a pretty close relationship with him.

Play any other sports and which ones?

Yes I do.  I play basketball, baseball and I run hurdles for the track team.

Favorite social media app and why?

Twitter - It keeps me updated with professional, college, and high school sports.

Favorite place to eat in the Osage City surrounding area?

Buzzards - It is a local pizza place.

Honestly, I haven’t looked that far ahead.  I can see myself though pursuing a career in architecture and doing some coaching.

I build my own duck calls.