v Frontenac, Labette County ready for CNC vs. SEK Showdown - Sports in Kansas 
Warning: include(../includes/bodytag.php): failed to open stream: No such file or directory in /home/kansass/public_html/ks/news/index.php on line 36 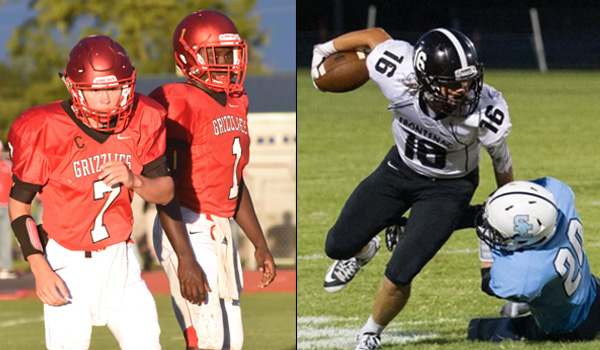 The Frontenac Raiders (5-0, 5-0 CNC) and Labette County Grizzlies (4-1, 2-0 SEK) have proven to be two of the top teams in each of their leagues so far this season. They get to battle it out as the CNC league Raiders will travel to Altamont to take on the Grizzlies on Friday night.

It’s not a match-up many would expect if you were to look back 15-to-20 years ago. At one point, Labette County was in 5A for basketball and the Raiders were a class 2A program. Now the Raiders are in 4A-II and the Grizzlies are in 4A-I. Frontenac has 268 students while LCHS has 507 students. It will definitely be a game to determine how the two leagues compare to each other.

Frontenac, led by fifth year head coach Mark Smith, has been perfect so far this year and has quality wins over Girard, Galena, and Colgan. They are currently ranked the number two team in the state in the latest Kpreps Poll. Although the Raider starters haven’t seen as many reps due to big wins, all-state quarterback, Brandon Mlekus will be the primary player the Labette County Grizzlies will have to shut down to be successful.

“The Mlekus kid is a stud at quarterback and it will be tough to defend him. Defensively we have our hands cut out for us. They are well coached and disciplined.” Labette County head coach Sean Price said.

Labette is coming off a huge win, in which may would call an upset, over Fort Scott last Friday in which they won 43-42 on converting a two point conversion late in the ballgame. The Grizzlies only loss is to Andale, the number two ranked team in 4A-I this season. LC is going for five wins for the first time since 2009 and Price has his team competitive in just his second year as the head coach. The Grizzlies only returned four offensive starters this year off a 3-6 ball club last year.

“Labette County is playing with a lot of confidence. They are very balanced and the kids believe in what they are doing. They are coming off a huge win at Fort Scott. We are going to have to control them and keep their offense off the field.” Smith said.

The offense Smith is talking about has been one of the most explosive in Southeast Kansas so far this season. Led by senior quarterback Logan Dean and senior running back Isaiah McPherson. Dean ranks near the top passers in yardage in Kansas with 1,160 yards and McPherson has 975 yards rushing after five weeks. Junior reciever Tanner Russell has bean Dean's primary target with 450 yards recieving on the year.

“I feel like we will have to make Labette County one dimensional by stopping the run. This game is a big step for our team.” Frontenac senior linebacker Dylan Flora said.

Not only is it explosive, the offense of Labette County is very balanced and is about 50/50 as they average 246 yards passing per game and 231 yards rushing per game.

“I feel very comfortable with Isaiah in the backfield. With his speed, he has the ability to make a big time play every time he touches the ball and that helps open up the passing game. We will need to execute every play the way we have prepared in order to win this week. It will take the effort of everyone.” Labette County senior Quarterback Logan Dean said.

The Raiders feature one of the best defenses in 4A-II and have allowed only 33 points after five weeks and are on back-to-back shutouts. The Raiders defensive line features all-state caliber lineman A.J. Lusker, who is 6-foot-2, 260 pounds, at defensive tackle and junior end Broc Ginvan, who is 6-foot-4, 230-pounds, and an emerging recruit for the Class of 2018. The linebackers are led by Flora, who is 6-foot-1 and 218 pounds, while the secondary is patrolled by Mlekus and seniors Isaac Bicknell and Ryan Long.

“I feel like we match up very well with them but they have tremendous size. They are very physical.” Price said.

Labette County has went to a two-platoon system this year to gain more depth and it has proved to pay off with a lot of players stepping up and getting more reps over the first five weeks.

For the Raiders, who have more hype on them this season because of the rankings, being undefeated, and the expectations, it’s all about taking it one game at a time.

“It’s just another big game and we need to win it to help us achieve our one goal. It’s one game at a time.” Junior Defensive End Cal Strand said.

It’s also a big test for the Raiders that know Labette is a bigger school and will help get them prepared for districts and the Class 4A-II playoffs.

“This is a huge game for us, playing a bigger school, it will be a good test for us for districts. We will have to keep them contained and force turnovers.” Mlekus said.

For the Grizzlies, there were no huge expectations on them from statewide media coming into the year and Coach Price has people talking about the Grizzlies in a short amount of time, but they know a win against a smaller opponent that is ranked will help put this program in contention to compete for an SEK league title as they approach districts, which feature three league opponents, in week seven, eight and nine.

“It will be a huge test and the way our schedule is it will let us know where we are at and what we need to improve upon. It will be a great game.” Price said.

Game time is set for 7:00 p.m. this Friday in Altamont. You can view the game online here

This feature is presented by Labette Bank. Be sure to visit them online at www.labettebank.com. Labette Bank is a proud supporter of the Frontenac Raiders and Labette County Grizzlies with branch locations in both Frontenac and Altamont. Be sure to nominate the Labette Bank Athlete of the Month with Sports in Kansas every month by emailing chetkuplen@kansas-sports.com.

Also special thanks to Stockyards Travel Plaza and Bartlett Co-Op for powering 4A-I updates this season with the Labette County Grizzlies.

The last time Frontenac went undefeated was 22 years ago when the Raiders won the 2-1A state championship. The Raiders are now two divisions up and have not won a state title since they did under Leon Miller. The last time the Raiders played for a state title was also under Miller in 2000 in 3A. The Raiders have made the state football playoffs in 4A, 4A-II, 3A, 2-1A, 2A and 1A. Almost seems made up, right?

Broc Ginavan is 6’4” 230 pounds and features the size recruiters are looking at and is only a junior. He mans up at one defensive end, while senior defensive tackle A.J. Lusker is 6’2 260 pounds and is one of the top lineman in 4A-II this season. The Junior/Senior combo feature some size, something we are thin on this year in Southeast Kansas. Also throw in Dylan Flora at linebacker, one of the top LB’s in 4A-II, who is up 18 pounds from last year and is 6’1 218 pounds. The Raiders have some size to them.

Defensive Coordinator John Palumbo has done an outstanding job with this year’s group. Through five games they have only allowed 33 points and have posted two consecutive shutouts. Much like the offensive guys that have stepped up it’s a big cast of Raiders on the defense including Lusker, Ginavan, Flora, Mlekus, Madl, Bicknell, Long.  Jake Wilbert, Cal Strand, Dexter Palmer, Tristan Fay, and Andrew Mays are also all tacklers in double digits this season. We knew the Raiders would be good on offense, but the defense has us impressed.

Mlekus may be the top quarterback in 4A-II this season but his stats won’t show that because he’s played two quarters over the last two weeks. However in limited time he still has 14 offensive touchdowns and one defensive touchdown on the season. Heading into 2015 it was unknown if he would even be the quarterback and he put together a 2,600 plus yard year with 27 touchdowns and breaking the school record for passing yards in a season. He is also an all-state wrestler and one of the best defensive backs in 4A-II.

Mlekus may be the star but the Raiders spread the ball out. Austin Madl, Cadin Bollinger, Ryan Long, Isaac Bicknell, Dylan Flora have all made plays offensively for the Raiders.

In his fifth year as head coach Mark Smith has a 33-14 record with the Raiders. Smith looks like he has the Raiders back to early 2000s form and an impressive note on the former all-state Colgan and All-American Pitt State Quarterback, he’s 3-2 against rival Colgan. From 1998-to-2011 the Raiders had zero wins against Colgan and Smith’s dad, Chuck.

Dean has proved he is the real deal at quarterback and one of the more underrated ones in 4A-I. He may be a bit undersized at just 5-foot-10 but the kid can throw it around the yard. He is ranked eighth in all classes of Kansas in passing yardage this season with 1,160 yards. Dean is also very accurate completing 65 percent of his passes. He is on pace to throw for back-to-back seasons of over 2,000 yards in which he threw for 2,054 yards and 21 scores a year ago.

He is one of the fastest players in 4A-I with 10.8 100-meter dash speed and sub 4.5 second 40-speed and is getting it done on the football field this season. He has scored 21 total touchdowns and has 975 rushing yards to rank fifth in all classes of Kansas and number one in 4A-I. His twin brother Isaac, a senior at Fredonia, is third in the state with 1,042 yards.

Dean’s primary target has been football newcomer Tanner Russell, a junior more known for basketball in the past who decided to come out for football this year. It’s proved to be a good thing as Russell is near on the statewide leaderboard in 4A-I with 450 yards receiving after five weeks. But it doesn’t end at Russell, Owyn Back, Kale Irwin, and Josiah Rexwinkle all have the ability to have big games.

We expect Labette County under Price to be known for more of an offensive team, but how about Bruce. He has 78 tackles in his junior campaign and ranks number one in 4A-I and number three in all classes of Kansas.

Price has the most wins as a Grizzly head coach in a single since 2009 when Craig Hartman went 5-5. How long ago was that? Brannon “Moose” Green, who went on to start tight end at OU, was a senior in high school on that team and has been done at Oklahoma for three years. With one more win this season, he will equal that feat. Don’t be surprised, we’ve seen him have success at Chetopa and even Columbus before that.