v Faces in KS: Hunter Budke & Caydren Cox - Sports in Kansas 
Warning: include(../includes/bodytag.php): failed to open stream: No such file or directory in /home/kansass/public_html/ks/news/index.php on line 36

Then to Now: Cox & Budke are best friends and two of the best players in 3A. (photo: C. Budke) 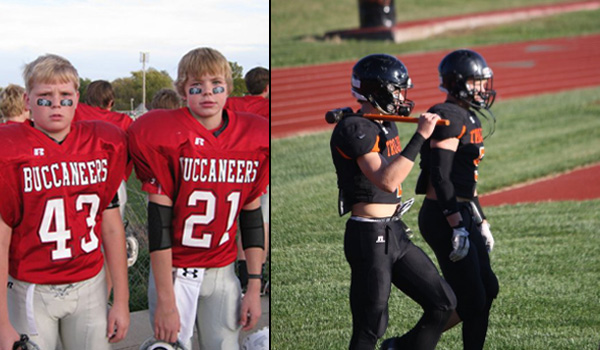 Teammates and Beloit High School seniors Hunter Budke and Caydren Cox are two of the top football players in 3A this season. They are also best friends and have been playing football together for as long as they can remember. This season Budke has led the Beloit offense, while Cox leads the defensive unit.

Budke, a 6-foot-3, 200 pound, senior, running back, has been huge on offense for the Trojans and has 910 rushing yards and 16 total touchdowns after five weeks of the season. Budke ranks sixth in all classifications of Kansas in rushing and is the second leading rusher in class 3A this season. Budke is not just a football player either, he was also all-state second team from Sports in Kansas in 3A basketball last season and is a two-time all-state hurdler in 3A.

"Hunter is one of the best athletes I've ever been around. We are best friends and we do everything together, I consider him a brother." Cox said.

Cox, 6-foot-0, 190 pound, senior, linebacker, has been everywhere on defense for the Trojans in 2016. He has 74 tackles after the first five games of the season for an average of 14.8 per game. He has also racked up nearly 100 yards rushing per contest and averages nine yards per carry. He is one of the top defenders in all of 3A this season. Cox also brings farm toughness to the field and says that he loves working on the farm over the summer, probably something that makes throwing people around on Friday nights a little easier.

"Playing with a competitor and athlete like Cayd is special. He's constantly making plays on defense and I credit him for making a lot of the key blocks for my success. We are great friends and hang out constantly. I can't think of anyone I trust more. He would do anything for me and I'd do anything for him." Budke said.

Both players have Beloit off to a 5-0 start in 2016 and should be a team to watch make a deep run in the 3A playoffs. Perhaps the best change Beloit has made is moving Budke from tight end last season to running back, but the biggest that the Trojans have had to get used to is not having Noah Smith out there on Friday's. They lost Noah Smith, a sophomore last year in April of 2016, in a car accident. Smith was a running back and defensive back on last years Beloit football team, where he was named first team all conference at defensive back. He was a freakishly athletic sophomore that played everything. It has definitely affected the community and this team.

"I've spent the last two years blocking for others and now im running the ball which is a huge change so I've been adjusting. The line has blocked extremely well. This season has been different from any other since Noah's loss, and I've been motivated by him. We want to win the league and we want to get to state." Budke said.

Beloit doesn't have a lot of depth with just 29 total players, but they are more than just a two-man show in Budke and Cox. They feature quarterback Ryan Jackson, Zach Meier at back/free safety, Blaine Burks at end/linebacker and Jarrett Arasmith at end/linebacker.

"This season has been great so far and we have a lot of contributors. We need to continue to get better and push each other every day in practice. It means everything for me to suit up in the black and orange, my dad won three straight football state championships when he was in high school, so the black and orange runs through my blood." Cox said.

For now Budke and Cox are worried about one game at a time, although they have their goals of getting to state. The Trojans, led by head coach Greg Koenig, will be back in action this Friday in a huge NCAA conference showdown with Southeast of Saline (5-0). Both teams are receiving votes in the Kpreps polls in 3A, perhaps one of the deepest classifications of contenders in the state for 2016. We caught up with Hunter and Cox below.

This feature is presented by First National Bank of Beloit (Est. 1884) - Proud Supporter of the Beloit Trojans. See us online at www.fnbbeloit.com

Also special thanks to Hubbard Feeds of Beloit & Cunningham Telephone & Cable for powering 3A updates with Sports in Kansas this season.

Dont forget to nominate the Nex-Tech Wireless Central Kansas Athlete of the Month over the last week of each month by emailing chetkuplen@kansas-sports.com

I’ve always had a passion for sports, and as early as I possibly could, I started playing sports competitively. I started playing flag football in 1st grade and started playing on a traveling basketball team shortly after. I can remember shooting baskets outside my house every chance I got. My dad would also take me to youth track meets all over the state.

How has the football season went for you so far?

So far it’s been fairly successful. We are 5-0 as a team and I’m appreciate to make the move from TE to RB. I’ve spent the last 2 years blocking for others, and now I’m at the running back position which is a huge change. I’ve spent the first few games adjusting to it. The line has blocked extremely well. This season has been different from any other since Noah’s loss, and I’ve been motivated by him.

Describe yourself as a football player?

I’m motivated to do whatever it takes to win and do what’s best for the team. I’m just a piece of the puzzle. I try to motivate others to be better than me.

Who are some of the other key play makers on your team?

My line, everyone in front of me. Caydren Cox at FB/LB of course, Ryan Jackson at QB, Zach Meier at RB/FS, and Jarrett Arasmith and Blaine Burks at TE/LB.

To win league and to win a state championship.

What is it like to play for Coach Koenig?

Coach Koenig demands respect, but Coach Koenig gives respect. He’s obviously a great football coach, but he’s an even better life coach. He prepares you for things in life that can’t be taught in the classroom, and I love him for that. At the end of the day, it’s so much more than football.

Unbelievable, it’s truly something special. The support from the community is exceptional and it’s always a packed house. You know where the town will be on Friday night.

What other sports do you play, how does being a multiple sport athlete help you?

Basketball and Track. Basketball helps keep me in shape and with my agility, while track helps improve my overall athleticism and speed. I also believe being a multiple sport athlete makes you more competitive.

My Dad is my role model. If I turn out to be half the man he is I’ll be just fine.

A football was put in my hands at a very young age and I have been hooked ever since.

Hows the season went so far?

The season has been great so far, we will continue to work hard and push each other every day in practice.

Hunter and I are always on the same page and we think a lot alike. Hunter is one of the best athletes I’ve ever been around. We are best friends and we do everything together, I consider him a brother.

We have to continue to get better every week as a team and we must stay healthy if we want to make a deep run into November.

How close of a community is Beloit?

Beloit is a very close community, our school receives so much support from the people of Beloit.

What do you do in your spare time?

In my spare time I like to hang out with my friends and family.

What makes you such a tackling machine?

I have a great nose for the football and god given talents. I also give everything I have in pursuit of the football.

What did you do this off-season to make you one of 3As top defensive players?

I played 7 on 7 with the Sharp Performance team, and I also worked out with Jake over the summer. I put a lot of hours in at the weight room and attended camps all over the state as well.

Any pre-game rituals you or your team do?

Our parents provide us with a team meal before every game, and then after our meal we go to the weight room and take a nap or get some quiet time.

Ryan Jackson at QB, Zach Meier at RB and FS, Blaine Burks at TE and LB, and Jarrett Arasmith at TE and LB.

I love working on the farm in the summer.

What does it mean to you to suit up in the black and orange?

It means everything to me. When my dad was in high school he won 3 straight football state championships so the black and orange runs through my blood.

Attend college and play football at a school that is the right fit for me.

How do you think the rest of the states sees Beloit and what it's like to live in?

I think the rest of the state knows that Beloit is a hard-working community, and the people are all so supportive of each other.