v Numbers in Kansas: What's impressive going into week 6? - Sports in Kansas 
Warning: include(../includes/bodytag.php): failed to open stream: No such file or directory in /home/kansass/public_html/ks/news/index.php on line 36

Aquinas has impressed many in 5A this season. (photo: Susana Photos) 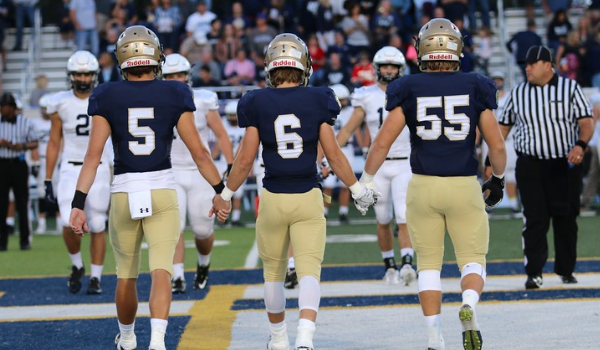 Impressive things happening around the state in high school football after the first five weeks of the season. We take a look at some of them by the numbers. If you have a tip or something you think we should know about you can always tweet us @sportsinkansas or email: chetkuplen@kansas-sports.com

Lancers are dominating Kansas competition but since they have a loss not as many people are talking about them as they should be. Throw the loss out, it was in week three to one of Missouri's top teams in Rockhurst, it was also a game the Lancers turnover the football six times, and many which were self-inflicted. SM East may be the best 6A team in Kansas, but aren't being treated that way in many polls across the state. They have outscored Kansas competition 235-to-52 in their four wins. MaxPreps poll also left Lancers out of national top 150, a poll Blue Valley, Derby and Miege all made, SM East is that caliber, so don’t sleep on the Lancers.

Over his last 3 games, Rounds has averaged 187.3 yds rushing per game & has scored 14 of his total 17 TDs in that span. Rounds had a slow start due to defenses keying on him, but has proved he is one of the top backs in the state after five weeks.

6A Football is Good

Only four teams of the 16 have a winning record on the eastern side of 6A football for 2016 after five weeks including Blue Valley (5-0), SM East (4-1), Lawrence (4-1) and SM West (3-2), while 12 teams on the western bracket of the 16 have winning records. It may fall down to the east just being more challenged with the Suburban/Sunflower matchups and brutal schedules in the EKL and Sunflower leagues. These playoffs are going to be good, maybe Derby, SME and Blue Valley are the top dogs, but there are a lot of other contenders with everyone (All 32 teams) getting that opportunity for week nine of the playoffs.

Last year’s 8M-I state runner-up is down to 8M-II but have started off this season just like last year, however they are just 4-0 instead of 5-0 due to an open week of scheduling. Will Bruna is back at QB and clicking, but the most impressive thing, the Wildcats are yet to allow a point scored against them in 2016.

Silver Lake (5-0) got back to where they were used to being and got the win over Rossville to end the Dawgs 32 game winning streak with an impressive 36-28 victory in the War-On-24 in Rossville on Friday. 3A East all goes through Rossville and Silver Lake. Since 2002, Silver Lake or Rossville has been the 3A representative in the state title game every year but one (Marysville, 2009). Rematch of the War-On-24? Don’t be surprised.

Defending 8M-I champ Spearville is ranked #4 in the nation for 8-man by MaxPreps. Last year had one of largest rosters in nation with 39 kids and were ranked #1 in the country. This year the Royal Lancers (5-0) have 32 kids out, with only five kids in the entire school not playing football. The town of windmills may be known for Willie Cauley-Stein being in the NBA, but Matt Fowler teams have definitely put them on the map over the last couple of football seasons. They will play Ness City this week and look to improve to 6-0.

Aaron Coash of Valley Center (5-0) has made five of six field goals this season w/ a long of 45 after five weeks. He is also 15/16 on XPs. This gives the Hornets a great option in tight ballgames.

Interception leaders as teams in Kansas include Garden Plain (11), Basehor-Linwood (11), Holcomb (10) and Herington (10). All have been huge in the turnover game this season and all four teams are contenders in their classification.

The Wildcats, co-head coached by Jeff Lohse and Gary Griffin, are off to a 5-0 start after the dismissal of Kyle Littrell for off the field issues before the season started. The defense has been outstanding in 2016 as they have only allowed 31 total points after five weeks as a team and have pitched two shut outs. They get Spring Hill this week, who is one of the hottest teams in the Frontier League, after winning three straight games after they started the season 0-2. Louisburg may be for real in 4A-I.

Osage City is no football power by any means but linebacker Brett Sage (5’11, 185 Sr.) is having one of the best years statistically on defense we’ve seen. After five games, he has 110 tackles (22.0 per game), 10 of those which have went for loss. Is this a video game?

Kaden Davis of Ellsworth, featured last week on Faces in KS, leads entire state of Kansas in receiving at 717 yards. Averaging 34.1 yards per catch. Features sub 4.5 speed and is a state champion in the 200 meter dash in 3A last spring as a junior.

Wichita NW set the state record for offensive yards per game last season at 538.9 yards per game (11 games). Averaging 567.2 through 5 in 2016. We expected their record to be better than 3-2, but the offense still gives the Grizzlies a shot in any game.

Caudle, a 6-foot-2, 160-pound, quarterback, isn’t a player that will be all-state by any means this season, but he makes the list because he is a freshman. Not many freshman get a chance to play let alone start and put 831 yards passing and 12 touchdowns over their first five high school games. His dad,Todd Caudle, was a multiple time all-state selection and part of the Midway-Denton (now closed) dynasty in the 1980s.

Lets face it, nobody had the Hornets at 5-0 at this point of the season. Has their schedule been that of somebody like Carroll or Mill Valley, absolutely not even close, but still a lot of credit to the great start for head coach Caleb Smith’s team. They play Eisenhower this week, who has struggled so far in 2016, and an opportunity to go 6-0. Hats off to the Hornets, but we are still looking for a signature win that can prove they are for real, maybe against Goddard in week seven of the season.

If Mill Valley plays 13 games, Brody Flaming on pace for 4,313 passing. State Record for KSHSAA school is Blake Jablonski of Collegiate with 3,884 yards set back in 2009 over 14 games. The most impressive thing? Flaming is a first year starter and only a junior.

Tony Crough is in his first year as the Trojan head coach and has brought immediate success. Has the schedule been strong? Not so much but nobody expected Andover to be 4-1 this point after going 1-8 a season ago. Crough did nice things with Great Bend and seems to be doing the same this season with Andover. Chasse Oberg and Evan Bell have been a great QB/WR combo in 2016.

Just in his first year as a starter and only a junior, McNerney is proving to be one of the top signal callers in 4A-II and in Wichita for 2016. He has thrown for 1,199 yards and 16 touchdowns while completing 64 percent of his passes. He has also added 219 more on the ground. Not bad for a guy who was a receiver one year ago for the 3A state runner-up. He features great size at 6-foot-1 and 192 pounds. He had a bad game against Mulvane in week four but bounced back with a 338 yard and five touchdown performance against Wellington last Friday. Collegiate is 3-2 and will be a team to watch in 4A-II west bracket this season.

Are the Dragons the best team in 5A? Probably not but at one point people completely quit talking about them and they shouldn’t just yet. They are yet to allow a point against Kansas competition as they have shut out Chanute, Fort Scott, and Andover Central. Their two losses came to two teams that were both highly ranked in Missouri at the time in Harrisonville (28-7) and Webb City (28-7). The Dragons, who left the SEK league to play an independent schedule to help test them for 5A playoffs, have Carl Junction (Mo.) this Friday, another team that has been ranked in Class 4A Missouri this season. Dragons may be 5-3 entering playoffs, but still could be one of those top 3-4 teams on the East of 5A. Their front four on defense may be one of the best in 5A that features the likes of Northwestern commit Trevor Kent (6’5” 257) and 5A state wrestling champ Kayne Hutchinson (6’1” 245).

Although the competition Schlagle has played hasn’t been typical competition your high powered 5A programs play, you can’t not recognize what Ruff has done through five weeks. The 5-foot-11 200 pound senior is averaging 228.6 rushing yards per game and has scored 17 rushing touchdowns on the season. His yardage total of 1,143 rushing yards ranks #1 in Kansas this season.

Twin brothers Isaiah McPherson of Labette County and Isaac McPherson of Fredonia are both near the top rushing leaders in Kansas this season. Isaac has 1,042 to rank third in all classes of Kansas while Isaiah has 975 to rank fifth in all classes.

It seems like people stopped talking about Aquinas after their week three loss against 4A-I and EKL power Miege, but lets make no mistake here, STA may be 5A’s top team or at least close to it. How impressive is that? Well they returned zero offensive starters from last year and lost their best player in Iowa State commit Angel Dominguez to a year ending injury before the season even started. They got a huge win over Mill Valley, 40-33, last week and will have another huge test in week eight against 6A EKL power Blue Valley. They are young, they are good and they have Randy Dreiling as their coach, look out for the Saints in the 5A playoffs. 5A is wide open.