Hayden Friend of Plainville is having a huge year in 2-1A. (photo:Jacque Bretton) 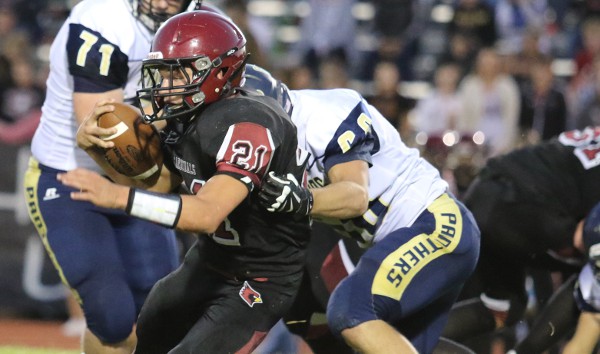 Hayden Friend, senior quarterback and defensive back at Plainville High School, has been selected as the Nex-Tech Wireless Western Kansas Athlete of the Month for his play over the month of September.

Friend isn't the biggest guy in the world, standing 5-foot-10 and weighing 165-pounds, but that doesn't seem to matter as he is having one of the best seasons in Kansas at the smaller classifications. Friend has passed for 997 yards and 14 touchdowns over the first five games of the season. He is coming off a seven total TD performance last Friday night in a win over Republic County, where he passed for 208 yards and rushed for 142 more. Friend also gets it done on the ground this season with 383 total rushing yards and five touchdowns.

He is also one of the top defenders in 2-1A this season with 27 tackles and three interceptions from his defensive back position. Friend is a huge reason that Plainville is ranked in the state and off to a 4-1 start with arguably one of the toughest 2-1A schedules in Kansas. The Cardinals, who play in the loaded Mid-Continent League, only loss this season came in week three to last years 2-1A champ Phillipsburg, now up to 3A. The Cardinals most impressive victories came in week one and week two over Smith Center (20-16) and Norton (20-14). A big improvement for a ball club that was 3-6 a year ago.

Plainville, led by head coach Grant Stephenson, is currently 4-1 and will take on Salina-Sacred Heart (2-3) this Friday at home. The Cardinals are currently ranked the #2 team in the state by Kpreps in 2-1A.