v Faces in KS: Hunter Kaufman - Sports in Kansas 
Warning: include(../includes/bodytag.php): failed to open stream: No such file or directory in /home/kansass/public_html/ks/news/index.php on line 36

Hunter Kaufman of Pratt is one of the top players in 4A-II. (photo: Rocky Robinson, Pratt Tribune) 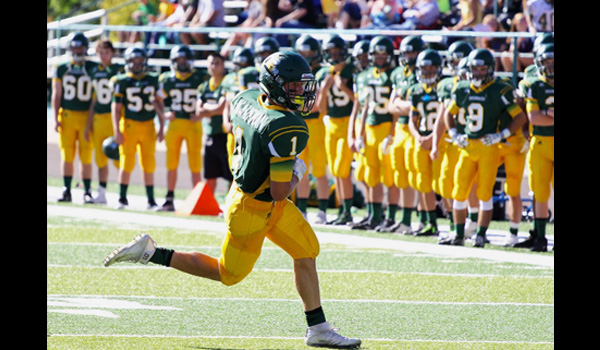 The Pratt Greenbacks are off to a perfect 4-0 start, but will have their hands full when unbeaten Hoisington comes to town on Friday night for a big Central Kansas League contest.

The Greenbacks ended the 2015 season with four straight losses, but have quickly turned the program around with wins over Larned, Haven,Nickerson and Lyons thus far. Pratt is averaging 51 points per game, while allowing just 15.5. Pratt's offense is led by senior wingback/free safety Hunter Kaufman. Kaufman is a threat in the Greenbacks flexbone triple option offense.

In Kaufman's three years on the varsity football team, he has accounted for 1,078 total rushing yards and 14 touchdowns, eight of those coming this season. He also has 692 yards receiving and seven touchdowns, three of those in the first four games of the 2016 season.

Kaufman grew up in Kingman, a fellow CKL team, located on Highway 400 straight west of Goddard about 30 minutes. Kaufman traveled to Wichita a lot growing up to become more competitive in football. He began playing tackle football in second grade for the Wichita Wolverines and has been in love with the sport ever since.

While most players just work out in their high school weight rooms over the summer, Kaufman took his talents elsewhere. Kaufman drove to Salina on the weekends during the summer to work out with former KU running back, Jake Sharp at Sharp Performances. He attended many skills camps, while getting stronger. At the end of the summer he'd increased his dead lift to 455 pounds, hang clean to 315 pounds and is now running a 4.46 40-yard dash, while weighing 168 pounds.

Kaufman looks for defenses to try and jam him up the middle, just when they do that, he'll cut towards the sideline and will turn it upfield. He calls himself more of an elusive runner rather than a power back.

The Hoisington defense will try to stop Kaufman on Friday, seven days after Kaufman rushed for two touchdowns and 117 yards on just four carries. Kaufman also had a 49-yard receiving touchdown in the 69-7 win over Lyons. Kaufman also returned a punt return for a touchdown against the Lions. The elusive back has rushed for over 100 yards in three of the Greenbacks four games, while scoring at least one touchdown in every game.

Kaufman gives a lot of credit to his offensive line for giving him space to work with and also to Pratt coach Jamie Cruce. Cruce took over the program in 2013, that team went 2-7 and didn't qualify for the playoffs. Cruce then guided the Greenbacks to a 5-5 record in 2014, but fell back down to 4-5 in 2015. The Greenbacks are off to a red-hot start and will look to keep that going with an undefeated Cardinals squad coming to town.

Kaufman and the Greenbacks will look to keep their winning ways as the season goes by. They haven't had six wins in a season since 2008 when the Greenbacks went 6-4. This year's team has a lot of weapons and will be a force in 4A-II.

Nex-Tech Wireless: a proud supporter of Sports in Kansas. Be sure to nominate the Central Kansas and Western Kansas Athlete of the Month by tweeting @sportsinkansas or emailing chetkuplen@kansas-sports.com

BTI: BTI is a proud supporter of Sports in Kansas with locations in Bucklin, Greensburg, Hoxie, Ness City & Pratt. Visit them online at www.btiequip.com

Q: What are your expectations as the year goes by?

A:  My expectations as the year goes by is to give it 100% every play, I expect my teammates to do the same and to hold me accountable and vice verso.

Q: Who are some of the key players on the team?
A: Well everyone on the team is a key player we have a big senior class, ten of the eleven starters on defense are seniors but I would say it starts up front with the offense and defensive line.

Q: What did you do in the offseason to get stronger and prepare yourself for this year?
A: I took a big risk and didn’t play basketball, I knew I had to get stronger and put on some weight and that’s hard to do with basketball and track back to back. I worked out twice a day and would drive up to Salina to train with Jake Sharp on the weekends and I would catch tennis balls several times a week. I attended severalfootball skills camps this summer and finished my summer weighing 168lbs with a Deadlift of 455lbs, Hangclean of 315lbs, and a 4.46 40.

Q: What are your plans for next year?
A: My goals are to play football at the highest level possible and play for a college that really wants me.

A: My favorite subject in school is history.

Q: What's one thing an average person wouldn't know about you?
A: I like woodworking.

Q: Do you have any pregame routines that you like to do?
A: I always eat oatmeal for breakfast on game day, I always where grey Nike combat compression shorts for each game. I always listen to a Ray Lewis speech.

Q: You've got a big game against Hoisington this week, what's it going to take to beat the Cardinals?
A:  It’s going to take everyone bringing there A game and giving it everything they have.

Q: You've accounted for over 1,000 all-purpose yards this year, whether it's running the ball or catching the ball, what makes you so hard to bring down?
A: I’m really not a power back I’m more of an elusive runner and try to use my speed to create separation.

Q: What kind of offense does Pratt run?
A: Flexbone triple option.

Q: Playing in a tough CKL, what makes Pratt the team to beat in the league?

A: We have a lot of weapons and a lot of people may not realize this but I believe were one injury away from going 7-2
last year and making a run in the playoffs.

Q: Anything else you wish readers would know?
A: I’m active in FCA and our local church.