v Faces in KS: Will Schneider - Sports in Kansas 
Warning: include(../includes/bodytag.php): failed to open stream: No such file or directory in /home/kansass/public_html/ks/news/index.php on line 36

Faces in KS: Will Schneider

Will Schneider of SM North is one of the top quarterbacks in Kansas. (photo: Shawnee Mission Post) 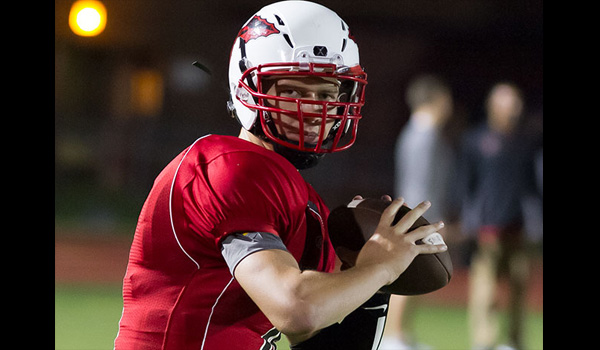 It seems like Will Schneider of Shawnee Mission North has been in high school forever. That's because Schneider is in his fourth year as a starter for the Indians at quarterback, not something you see every day in 6A football. He's also a left handed quarterback, another thing you don't see often. North High hasn't had a ton of success in recent memory but Schneider is one of the top signal callers in Kansas and has his team competing, a big difference from when he started his first game as a freshman in 2013.

"Playing as a 14 year old freshman was a reality check. I was always a bigger kid in junior high, but my first game we had to play the number one team in the state in Free State. I saw those huge lineman coming at me and my head was spinning. I was sacked 46 times that year. I always got back up and keep giving it everything I have." Schneider said.

Three years later and the shots that Schneider, now 6-foot-4 and 205 pounds, has taken over the years have turned into a lot of success for him as a quarterback. This season he had only been sacked three times after the first three weeks. He threw for over 1,900 yards as a sophomore in 2014, threw for 2,405 yards last year with another 605 on the ground for 29 total touchdowns and now has 1,163 passing yards as a senior through four games. He currently ranks #1 in 6A in passing yardage and #2 in all-classes of Kansas. The most impressive thing is Schneider is putting these numbers up against Sunflower League competition, arguably the states best 6A league over time.

It hasn't been easy for Schneider playing on a team that has struggled over the years, but this year the Indians are 2-2 after four games and nearly won last week against Olathe Northwest (25-22 L). But things have gone from five total wins in Schneiders first three years combined to a .500 record in his senior year. Not bad for a program that has had numerous coaches over the last 10 years, but third year head coach Ben Bartlett and Schneider seem to have the program going in the right direction.

"I had opportunities to leave North after Coach Simmons left before my sophomore year. I chose to stay because this is my family. All these guys are my brothers whether we win or lose, I would not want to play anywhere else." Schneider said.

It has also taken a lot of hard work for Schneider to become one of the top passing leaders in Kansas over the past few years. He trains with Elite 11 Quarterback Instructor and Owner of Spin It Quarterback Academy, Justin Hoover.

"Will came to a couple of our camps in the past and this past off-season he began working a lot with us. The size, arm talent and desire are all there. He's always trying to learn and improve. I have been really impressed with his holistic approach to the position. Everything is important to him. He has a bright future as a quarterback and a person." Hoover said.

Although Schneider is seeing some recruiting interest, his focus right now is on the 2016 football season. They wont be favored by many on Friday as they take on 6A state power SM East, but expect Schneider to be a major factor in the game. The Indians will take on the Lancers (3-1) on their home field this Friday. We caught up with the outstanding senior below in the latest Q&A edition of Faces in Kansas.

When did you get involved with football and why?

I started playing flag football in 3rd grade. I had grown up going to Chiefs games and watching football whenever it was on TV with my Dad. He would always explain formations and plays to me as we watched. So in 3rd grade when my parents said I could start I jumped right in. My dad was my head coach from 3rd grade through 8th grade and he taught me a lot.

Our season has been going very well, we have a lot of talented players this year and we are coming together more and more each day. We have started off 2-2 and we are focused, and we believe this is a year for us to make a run in the playoffs. We have a great coaching staff, making sure we are working hard at practice to prepare us for every game.

Describe yourself as a quarterback?

I would like to say that I'm a dual threat Quarterback. I have gotten very comfortable dropping back to pass and making the big plays with my arm. However, I have also been working really hard to improve my running game by getting faster and stronger.  This year it has been vital to our offense that I am able to extend plays with my feet and buy some time for my receivers to get open, or just go get the yards in front of me.

What has it been like to be one of the top signal callers in the state on a team that has struggled over time?

After Coach Simmons left the summer before my sophomore year, I had opportunities to play for other schools, but I chose to stay at North because this is my family.  All of these guys are my brothers and win or lose, I would not want to play high school football anywhere else.  It has been an honor to play here for the last four years, I have had the opportunity to improve every year, and they have always had my back.

Is it hard to believe you have already been starting four years, what was it like playing as a freshman?

To be honest, playing as a 14 year-old freshman was a reality check. I had always been one of the bigger, faster, stronger kids growing up and so when we played that first game against the number-one-ranked 6A team, Lawrence Free State, and I saw those lineman coming directly at, me my head was spinning! I was sacked 46 times as a freshman, but I always got back up and played every game.  I learned a lot that year; it was a humbling experience.

What is it like to play for SM North?

To play for North is very cool because of the tradition... There is nothing quite like the way we start a football game, when you hear that loud drum beat, you start to feel your heart pounding, and you know it's game time!  The band plays our school fight song, the cheerleaders dance around our mascots, and the fans are on their feet cheering us on; I am excited to be a part of this tradition because it's bigger than just us.

Who are some of your key playmakers at SM North?

That's a hard question because we really play as a team.  In the last game I threw to nine different receivers, all of them were important to our success and all of them are working really hard.  Of course we would not be able to pass the ball as well as we do without our big boys up front! This year I have only been sacked three times in first three games, which is much improved from my freshman year. Our running backs are also ridiculously strong and fast, this opens up the passing game because other teams have to respect our run game.

What will it take for you guys to have a winning season in 2016?

We are taking it one game at a time.  We commit all of our focus each week to that opponent.  We are trying to stay focused on what we do best and just trying to improve each week. We feel like any game we go into, if we play as a team, we can win.

Plans at the next level, seeing any looks? From who?

My goal has always been to play Division I football. I really want to find a school where I will get to play and contribute to the team.  Currently, I am talking with several different coaches and I think we are getting close to making a decision.

What do you do in your spare time?

Given the amount of time I spend training and practicing I do not have a lot of spare time.  I have played Varsity Basketball for the past three years, including playing on last year's State Championship team. I have also been on the Track Team, running the 200 and throwing the javelin, and for the past two years I have played Varsity Baseball.  When I do have time off, I like to hang out with my family, friends, and of course my girlfriend.  And I am extremely proficient at Madden and 2K.

AP English is probably my favorite class this year.  I really like the discussions we have in that class.

I auditioned for and was selected to be a member of North's A.R.T. (Advanced Reparatory Theater.)  This Drama class is only for seniors, and at North it is a really cool thing to be a part of. I am excited for our fall show, "A.R.T. Deletes the Emails."