v Faces in KS: Justin Peine - Sports in Kansas 
Warning: include(../includes/bodytag.php): failed to open stream: No such file or directory in /home/kansass/public_html/ks/news/index.php on line 36

Justin Peine of Prairie View is an underrated 2017 offensive line prospect in Kansas. 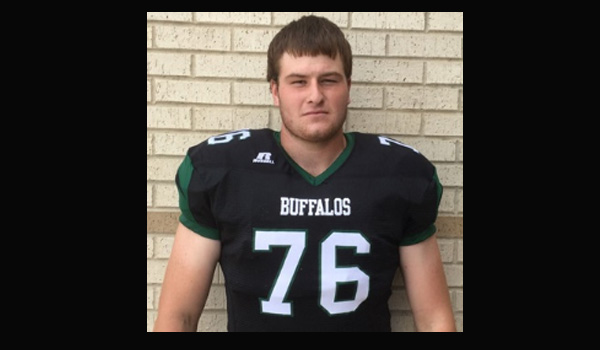 At 6-foot-6, 276 pounds, Prairie View senior offensive and defensive lineman Justin Peine is one of the biggest players in Kansas. He’s also one of the strongest.

“Im a very physical player and more of a run blocking lineman. Once I get my hands on a defensive lineman I’ll take them where ever I want to.” Peine said.

Peine brings that hardworking farm strength to the football field on Fridays and is primed to be an all-state selection this season on the offensive line after earning all-league honors last season on both sides and all-state honorable mention. He has a bench press of 400 pounds and is probably the most underrated lineman in the state of Kansas for the Class of 2017. Peine is a raw prospect that could blow up this season and hadn’t attended any football camps until this past summer. That’s where he figured out he had to change some things with technique and what college coaches are looking for.

“Being a farm kid has taught me to be strong and tough mentally and physically. I bring that to the football field. I worked hard this summer in the weight room and also went to some football camps to work on technique and improve this summer. I have some junior college offers but my goal is to play division one football.” Peine said.

Peine isn’t your average high school lineman that is just a big kid that can’t run, he is also a starter on the Prairie View basketball team. He also throws in the spring in track and field, where he was an all-state performer in the discus. Peine features a 40-time in the 5.1 range at nearly 280 pounds. We first saw Peine last year at a high school basketball game at the Kansas National Guard Tourney in Frontenac and were shocked how he moved for a kid as big as he is. That put him on the recruiting radar for the class of 2017 and one of our Sports in Kansas Top 25 lineman to watch this season.

“Playing multiple sports keeps me in shape year round. I think it helps with me being athletic for all the sports I play.” Peine said.

For now Peine is worried about winning more football games in his senior season for head coach Doug Witcraft. The 4A-II Buffalos have struggled to a 1-3 start but are working to get things turned around this season. They will take on 4A-II power Columbus (4-0) this Friday. We caught up with Justin in the latest Faces in Kansas feature below.

Labette Bank of La Cygne – Be sure to nominate the Labette Bank Athlete of the Month every month by tweeting @sportsinkansas or emailing chetkuplen@kansas-sports.com, visit Labette Bank online at www.labettebank.com

I got involved when I was a little kid my older brother played flag football so I thought that I should too.

How’s the season going so far?

The season is going ok. We are 1-3. But we changed up the offense so we will get things turned around.

How would you describe your style of play as a lineman?

I'm a very physical player, I am more of a run blocking lineman. More for making big holes for the backs to go and run through. Once I get my hands on a defensive lineman I'll take them were ever I want to.

I worked out in the weight room. I also went to three football camps this summer to get better on my technique and just to improve all around.

What is it like to play football at Prairie View HS?

It a very great team, we play as a family. All of us players play for the man next to us.

Our two running backs are key to our offense. They do a very great job. The two running back names are Trevor Hoover and Trey Isenhower. Our tight end Jesse Henry is also a key player he's very good at blocking. Also he's a big help on defense at the linebacker position.

Any looks at the college level, what do you plan on doing?

How does being a multiple sport athlete help you out?

It keeps me in shape year around. It makes me not get out of shape. Always helps me improve as an athlete.

What is it like to be a farm kid and play football, any advantages for you?

Being a farm kid and playing football has taught me how to be tough physically and mentally. I bring that on to the football field.

My favorite subject is math.

Best place to eat in La Cygne or the surrounding area?

Is the family cafe.