v Faces in KS: Kaden Davis - Sports in Kansas 
Warning: include(../includes/bodytag.php): failed to open stream: No such file or directory in /home/kansass/public_html/ks/news/index.php on line 36

Kaden Davis of Ellsworth is putting up big numbers in 2016, (photo: Emily Photography) 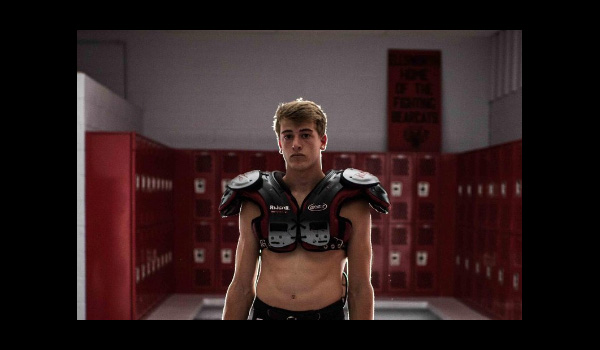 Ellsworth senior Kaden Davis is one of the fastest athletes in Kansas. He proved that last spring by winning the 3A 200 meter dash, but Davis isn't just a track athlete. Davis also gets it done on the football field where he is one of the top two-way players in the state of Kansas for the class of 2017.

Davis, a 6-foot, 182-pound receiver and defensive back, is a game changer that does a little bit of everything this season for the Class 3A Bearcats. He has 19 catches for 569 yards and eight touchdowns as a receiver to rank second in receiving yardage in all classes of Kansas. He can also run with the football as he has 19 carries for 222 yards and three touchdowns out of the backfield. Davis is averaging over 11 yards per rush in 2016 and has 860 all-purpose yards on the season. Davis has also thrown a touchdown pass on offense. On defense, Davis has 39 tackles and two interceptions. He is also the kicker, the punter, and the return man for Ellsworth. There's not much he can't do.

"My speed gives me an advantage all across the field where it's one on one matchups out wide or in the slot, taking the direct snap or on returns. On defense it helps as well being able to chase people down and stay on top of routes." Davis said.

Davis is a freak athlete and he proves that in track and field and combine events he has attended. He is the defending state champion in the 3A boys 200 meters. He is very versatile as an athlete and his measurables prove that. He has a 49 second 400-meter dash, a 1600 time under five minutes, a 10.64 100-meter dash time, and a sub 4.5 forty yard dash, and a 36-inch vertical. Not many athletes can range from 100-to-1600. At the Shrine Bowl Combine this past summer he posted a 4.54 electronic forty yard dash, tied for fastest at the event. He also ran 4.55 at a Nike Combine and ran a sub 4.5 at Wyoming camp this summer.  Although Davis numbers jump off the chart, he is not satisfied and is constantly looking to improve.
"This off-season I worked out at Sharp Performance with Jake Sharp and David Leonard to improve my speed and agility. I also went to several combines and elite camps, as well as worked out with my high school team all summer." Davis said.
For now, Davis is focused on the 2016 football season and winning more games. Ellsworth (2-2), led by head coach Brent Schneider, is currently on a two game winning streak with wins over Republic County and La Crosse and will take on Sacred Heart (2-2) this Friday.

We caught up with Kaden below in a Q&A...

Kan Equip - A Proud Supporter of Ellsworth Bearcat Athletics, visit www.kanequip.com for all your farming needs.

Nex-Tech Wireless - Be sure to nominate the Western Kansas and Central Kansas Athlete of the Month with Sports in Kansas, Find us online at www.nex-techwireless.com

I got involved with football at a young age considering my dad started coaching when I was a baby. I was in first grade when I first started to play flag football then fourth grade when I got to strap on the pads and play more competitively.

Hows the season going so far?

The season started off a little rough but I believe we have bounced back and put that behind us and are ready to go all out the rest of the year.

What is it like to play for Ellsworth and grow up in the community?

It's really cool to play for Ellsworth because my dad's family grew up here and football is the best thing going on in this town on a Friday night so everyone is really supportive of us.

What did you do this off-season to become a better player?

This off-season I worked out at Sharp Performance with Jake Sharp and David Leonard to improve my speed and agility, competed on the Sharp Performance 7-on-7 team, attended multiple combines (Nike Rating Day, Nike Opening Regional, Shrine Bowl Combine), went to elite camps (Wyoming, Kansas State, KU, Butler), and worked with my high school team at weights three days a week and our 7-on-7 school team competed in Salina in a local league.

How much is your speed a game changer for you?

My speed gives me an advantage all across the field whether it's one on one match ups out wide or in the slot, taking a direct snap, returning punts and kicks, or even defensively being able to chase people down and stay on top of routes.

My main goals for this season were to win a league title and state championship, even though we can't win league now me and my team are still after a state championship. As far as personal goals I want to reach 2,000 all purpose yards with 1200 receiving in there.

Seeing any looks at the college level?

I am seeing looks from a few jucos (Butler CC., Hutch CC., Highland CC.,), one division II school (Fort Hays), and then multiple D1's (Kansas State, KU, Wyoming, Drake, Missouri). Right now I only have one offer (Butler CC.) but at the moment I'm only focused on this season and we will see what comes from that.

Who are some other key players on your team this season?

This season we have quite a few key players, Colton Hower a wide receiver with great blocking ability, Zac Schneider our dual threat QB, Jordan Base a wide receiver and wing back who has great athleticism, and Jacob Kerby our Center and big guy on the team who runs the line.

My favorite athlete is Odell Beckham Jr. because of his work ethic and the emotion he plays with out on the field.

What will it take to get another state championship in track and field this year, I imagine your sites are set on multiple state titles this season?

Just like last year it's going to take a lot of hard work and commitment. My sites are set high on three golds at state this year in the 100m, 200m, and 400m.

I'd have to say my favorite subject in school is Physics.

Favorite social media app and why?

My favorite social media app is twitter because I can follow local, collegiate, and professional athletes and see what they're up to on a regular basis.

My favorite food is fried chicken.