v Numbers in KS: What stood out on Friday Night Week Four? - Sports in Kansas 
Warning: include(../includes/bodytag.php): failed to open stream: No such file or directory in /home/kansass/public_html/ks/news/index.php on line 36

Numbers in KS: What stood out on Friday Night Week Four? 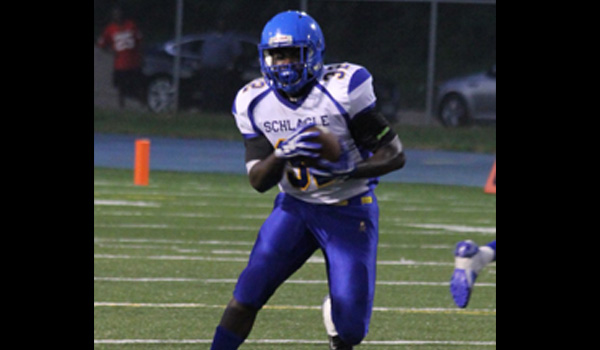 Several happenings across the state of Kansas after week four of the football season. We break it down. You can always tweet us info/tips every week by tweeting @sportsinkansas

How about 4A-I Coffeyville. Were on 12 game losing streak. Have won three in a row w/ only five seniors on team. Coach Darrin Wegner is in his first year and the schedule hasn’t been great but this program needed these wins to get things going in the right direction.

We list him as athlete because he does everything but drive the bus and coach the team. Swinehart had seven carries for 203 yards, four receptions for 121 yards and four total touchdowns for Lyndon on Friday. He can even pass the football if he needs to. And, he’s only a junior. Lyndon is definitely a team to keep an eye on 2-1A East.

Clifton Clyde and Rural Vista combined for 146 points tonight in the Clifton-Clyde 74-72 victory over Rural Vista in 2 OT.

Ruff rushed for 361 yards and four touchdowns on Friday night to give him 875 yards and 11 scores on the season.

The Bobcats may be for real. Their multi-dimensional offense has been very hard to stop and their defense has been just as good. They have outscored opponents 235-to-24 under head coach Rod Stallbaumer. They got a dominating 46-6 victory over an Independence squad, who entered 3-0, and looks to be the best team out of the Southeast Kansas League this season. It’s Bishop Miege and everyone else right now in 4A-I but maybe Basehor can be that team to compete with them in 2016.

I don’t think anyone is surprised that Derby is 4-0 at this point but they may be on their own level in 6A West Bracket football. The Panthers hammered Hutchinson on Friday night 46-20. In fact, they have been hammering everyone as they have outscored opponents 188-53 through four games. The Panthers, under head coach Brandon Clark, have won two out of the last three state titles in 6A and are the defending champ in that classification.

Not only did the Raiders improve to 4-0 with their blasting over Riverton on Friday night, how about Friday morning? The Raiders lined up the sidewalks of Frank Layden Elementary School in Frontenac to greet the elementary students as they came into school. This is what it’s all about and these elementary kids will remember this the rest of their life. Mark Smith and the Raiders have shown their class off the field but hey also get it done on the football field and are primed for a big run in 4A-II.

The Dragons won their first game since the 2012 season as they defeated the Northeast Vikings in Arma in dominating fashion, 48-0. According to Kpreps, it was their first win since October 19th of 2012. Sometimes all it takes is a win to get kids going in the right direction, congrats to the Dragons.

Newton continued his success with 224 and 4 TD in the win over Iola on Friday. That gives him 794 rushing yards and 11 touchdowns on the year for the 4-0 Trail football team.

The Tigers have now beat two number one ranked opponents this year, 35-28 in week one over 4A-I #1 Miege and an impressive 45-28 victory on the road over Mill Valley on Friday in Shawnee. The Tigers, who took second in 6A last season, are 4-0 to start the 2016 campaign. Senior Matthew Dercher, a first year starting quarterback, has been a huge part of their success as he has thrown for over 1,100 yards after the first four games.

Topeka-Seaman is the only undefeated team on the 5A East Bracket at 4-0. They were 2-8 last year. Great start for 1st yr HC Glenn O'Neil who came over from Scott City. O’Neil won multiple state titles in basketball and football combined at SC.

Hanzlick got his 4,000th career rushing yard on a 40 yard touchdown in the first quarter against Washington County on Friday. Hanzlick a back-to-back all-state selection in 3A has his team at 4-0 on the season and is over 700 rushing yards after four weeks.

Don't know if this has ever happened? Both Salina 5A schools (South & Central) are 0-8 combined on the year. Have lost some tough ones. Hopefully both programs can get back in the winning column as the two have had so much success over time.

East still may be the best team in Kansas. A lot of people put stock into a loss, but we don’t. The turnover bug, mostly self-inflicted by SME, in week three against Rockhurst killed them. They had six of them and still were in a position to win a ballgame in which they lost 26-20 to the 6A Missouri power. It very well could have been a dominating East win if the ball bounces a few different ways, making excuses for them here maybe, but it doesn’t take away they are still one of the most dominating teams in the state and hammered Olathe North 48-13 on Friday night. SME is the real deal.

These two traditional powers got their first win of the season on Friday night, Holton beating Riverside 41-7 and Hayden beating Topeka West 55-14. They did have tough schedules with their 0-3 starts and we still do expect them to make some noise in 4A-II this season. Hayden does play a 5A/6A schedule, so their record should never be a factor. Also keep in mind, Santa Fe Trail (4-0) is in the same district with these two with only two teams going onto the playoffs. Hayden and Holton will meet up in week eight of the season in districts at Holton. Jeff West (0-4) is the fourth team in their 4A-II district.

4-0 starts for teams that we maybe didn’t expect to be undefeated on 5A West?

Outside of themselves, did anyone have these teams in 5A West undefeated? Huge 4-0 starts for Great Bend, Wichita Heights & Valley Center.

All four 6A Olathe Sunflower teams are 1-3 on the season. Has that ever happened? Not sure but the teams have had some tough schedules for sure and none of them had luck in the Suburbran/Sunflower Challenge in week three against Missouri opponents. Still a lot of football to be played and hopefully these teams can get going in the right direction. It is surprising because there is always an Olathe school that seems to be dominant and in some cases in the past more than one.

The Wildcats are 4-0 for the first time since the 2010 season when they won it all in 4A under Gary Griffin. Interestingly enough Griffin is back as a co-head coach this season with Jeff Lohse. The Wildcats defense has been outstanding in only allowing 23 points through the first four weeks, including two shutouts. The district should be a good one coming up with Fort Scott, Ottawa, and Paola with only two playoff spots on the line.

Big night for junior WR Brayden Francis of 2-1A Sedgwick: 11 catches for 207 yards (2 TD). 200 recieving yards is pretty rare in high school football, yeah we see it a few times a year but not often.

Lawrence lost basically everyone off their team a season ago. Returned some experience but the stars like J.D. Woods, Amani Bledsoe, and Trey Georgie are all gone. It hasn’t seem to phase them too much this year. Dirk Wedd’s squad is 3-1 and undefeated against Kansas competition. In fact they have scored 49 or more in all of their wins this season including a dominating 49-19 victory over SM West on Friday. Look out for Trey Moore and the Chesty Lions in 6A. As we’ve been seeing in recent years, 6A looks to be loaded statewide once again.

Is Goddard a team to watch in 5A? Huge 60-12 win over Ike tonight. Yeah they lost to Derby in week two but who isn't going to. Lions are 3-1

South is off to a quiet 3-1 start and may be an under the radar team to watch in 6A under Kevin Steiner. Their schedule will get tougher with Dodge City, Carroll and Heights all still on it and 6A playoffs are going to be loaded but have to give a shout out to them on their big 35-14 victory over Kapaun on Friday. Their defense has been outstanding on the season as the Titans as a team have only allowed 17 points through their three wins. Tyrekus Birch is among one of the state’s best defensive lineman and has an offer from Wyoming. Their only loss came to 6A undefeated Garden City, 21-6, in week three.