v Faces in KS: Jake Hastings - Sports in Kansas 
Warning: include(../includes/bodytag.php): failed to open stream: No such file or directory in /home/kansass/public_html/ks/news/index.php on line 36 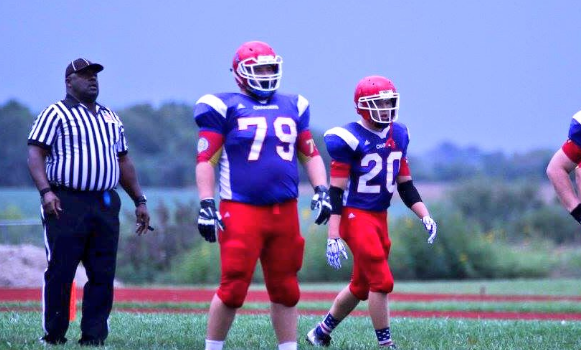 Santa Fe Trail is a school that over time hasn't been known for their football success outside of a few good years and has 12 playoff wins in its school history. It has changed recently under head coach Jayson Duncan. Trail has made back-to-back playoff appearances in 4A-II. In 2014, they made the playoffs for the first time since the 2001 season and made it all the way to the 4A-II semifinals. Last season SFT made it to the round of eight. A big reason for their success has been players like Jake Hastings. Hastings, a 6-foot-3, 305-pound, senior offensive and defensive lineman has been a back-to-back all-state selection in 4A-II.

"Jake has brought toughness and power to our football program. Each week we go in knowing that we have an advantage with him at right guard and we look to exploit it. We've had many good players over the past few years, but none better than Jake. He deserves all the accolades he gets." Duncan said.

Not only has Hastings been a back-to-back All 4A-II pick, he also was a first team defensive lineman on the All Non-Senior Team from Sports in Kansas in 2015 as a junior, meaning he was a first team selection among all classifications in Kansas. Hastings is one of the most physical players in the state.

"I'm more of a physical type of lineman that can pull and pancake somebody or can work his way down field and lock onto a linebacker." Hastings said.

The physicalness of his play may come from being a high school wrestler. Hasings is a two-time all-state wrestler and had over 40 wins as a junior in the 285-pound class in 4A last winter. Hastings isn't just a football player who is large, he can move around for a big strong kid. He features 5.29 speed with his 300 plus pound football frame. benches 355 pounds, cleans 315 and squats 510 pounds.

"The biggest advantage I get from wrestling is flexibility. Its a big factor on the offensive line, it helps with my speed, explosiveness and stance." Hastings said.

Santa Fe Trail looks to be headed for another successful season in 2016. They are off to a 3-0 start, one of only three 4A-II teams on the East. However their district features traditional state powers Holton and Topeka-Hayden, both of which are 0-3 against quality schedules but could still be in the mix to be among 4A-II's best teams. Trail doesn't have just Hastings either, Fullback Peyton Newton has stepped up big in 2016 and is the leading rusher in 4A-II this season with 574 yards after three games.

"This season is off to a great start. Our expectations are to win the Pioneer League, win a third consecutive district championship and to make a deep playoff run. Of course our goal as everyones is winning a state championship." Hastings said.

Santa Fe Trail (3-0, 3-0 Pioneer League) will be on the road this Friday against Iola (1-2, 1-1 Pioneer League). We caught up with Hastings in the latest Faces in Kansas Q&A feature below.

This feature is presented by Cross Road Community Church, a proud supporter of Trail Football. Go Chargers! See them online at www.mycrossroad.org

I don't quite remember how I got involved in football I just remember it always being around, it went from football in the backyard to flag football to tackle and I just fell in love.

The season is off to a spectacular start, we kicked off with a really tough Osawatomie team, that showed us where we needed to be and we really got things worked out.

What are your expectations this year?

My expectations from this year are to win the pioneer league, to win a third consecutive district championship, to make a deep playoff run, and of course everyone's goal of winning state.

Coach Duncan is a great coach, we've grown up with him and he's always been around and everyone knows him as ¨Coach Duncan¨. He knows everyone on the team very well and knows everything we can do, that's part of the reason we click so well together.

Key players on this years team?

We have lots of key players on the 2016 squad, Peyton Newton had lots of carries and is very experienced at the fullback position, Dacoda Kincaid and Jaden Bone both had really successful seasons last year at defensive ends so expectations are high for them, Gage Greenfield is also a very experienced back who can not only run and read his blocks but he's a very consistent blocker, and of course we´re back again with a huge offensive line including three returning starters.

How important is the weight room?

The weight room is very important for not only me but the team, all those early mornings we spent together in the summer definitely brought us closer as a team and is a very big variable to our success this season.

How would you describe yourself as a player?

I'm more of a physical type of lineman that can pull and pancake somebody or can work his way down field and lock onto a linebacker.

Almost everyone of this years starters was in the weight room every Monday, Wednesday and Friday grinding, we all knew the losses we faced from the graduating class, and we knew we had to find people who could step up and fill them, and i think we executed that perfectly this offseason.

What has the run in football been like at Santa Fe Trail recently?

It´s been very exciting times at Santa Fe Trail the last three year, we're finally a football school again and to be apart of the first successful teams out of Santa Fe Trail in a long time is a great feeling.

Biggest advantage for wrestling in football?

The biggest advantage I get from wrestling is flexibility. Flexibility is a huge factor when playing on the offensive line, it helps with speed, explosiveness out of your stance and getting into your stance correctly.

What is yoru favorite thing about wrestling, how long have you been doing that and is it your favorite sport?

The thing I love most about wrestling is competing with all my buddies. I've been wrestling for about 7 years now, but it is not my favorite sport, it could never replace football.

I don't have any plans set in stone. I want to play football in college, and have hopes of going big one day.

My favorite subject in school is anatomy, I love learning about the body and have plans of going into the medical field in the future.

I don't have a favorite athlete per se, but Jordan Burroughs is an amazing athlete and he has a great message so he´s probable up there.

What is it like to grow up in a small town, how would you describe the communities around SFT?

Growing up in a small town is great for a football team. Everyone knows everyone, and we've all played with each other since we were little kids. It also keeps each other accountable so if someone messes up everyone knows and we can get it fixed.

I really like teeth, and I have dreams of becoming a dentist one day.